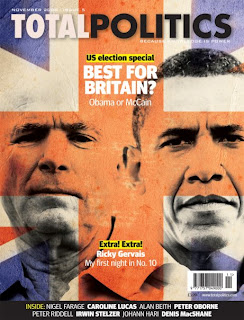 Feature interview with Nigel Farage, leader of UKIP
Ricky Gervais: If I Were PM
Interview with Green Party leader Caroline Lucas
Peter Riddell on how we treat our armed forces
Amber Elliott on the new young generation of politicos
Tim Shipman on how Obama could still lose
We help celebrate the tenth anniversary of BBC Parliament
David Seymour explains why we still need the House of Lords
Irwin Stelzer & Johann Hari debate whether Obama or McCain would be best for Britain
Peter Bruinvels features in our Where are They Now slot
Five new articles feature in our Total Campaigns section
Sir Alan Beith is interviewed about his memoirs

You can buy a print version of the magazine at any branch of W H Smith, or selected branches of Waterstone's and Borders.
Posted by Iain Dale at 5:57 pm

Get BBC2 on and watch John Prescott on Class, very good indeed.
freedom to prosper

I went to look in Smiths to see what this issue looked like on the stand, only to find it totally hidden behind the other mags. So I moved it to the front. :) Looks pretty striking. but I think the red should have been a bit brighter to make it pop out of the stand more.

"Sir Alan Beith is interviewed about his memoirs."

How DARE someone as defiantly devoid of interest as Alan "Little Alan" Beith write his memoirs?

Truly, he could bore the buzzards off a dustcart.

The publishers might just as well have chopped down a couple of trees and decanted them into a remainder bin and saved him the bother of putting his mind-curdlingly dreary recollections down on paper. Silly little man.

What an outrage. What are they called, these memoirs, "My Struggle"?

Clear off, Alan Beith, you waste of space.