Another early start, leaving the hotel at 7.45am for the 75 minute drive to Ramallah. For those who don't know, Ramallah is on the West Bank and houses the headquarters of the Palestinian Authority. In order to get into Ramallah we had to change buses as our Jewish driver is not allowed to cross into the West Bank. During the short drive to the PA HQ we drove through the streets of Ramallah, which is one of the more prosperous West Bank towns. Indeed, it looked little different to most Arab towns. We arrived a bit early and had to sit outside the PA Compound. Eventually we were allowed in and had the opportunity of viewing the morning marching by PA soldiers. Not sure their marching technique would quite make Sandhurst!

The security, it has to be said, was lax in the extreme. We were let into the building which houses President Abbas's office and we could have gone anywhere we wanted. We were shown into a waiting area before our meeting with Rafiq Husseini, Abbas's Chief of Staff. The waiting area was opposite Yassir Arafat's old office. Sorry, but I couldn't resist the pics... 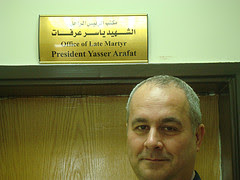 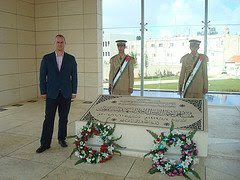 We were with Mr Husseini for 45 minutes but left the meeting wishing it could have lasted the whole morning. What an impressive man. You got the feeling that if they were all like him, peace would break out in an instant. Calm, collected, authoritative and non-dogmatic - an ideal man to be one of the Palestinian Authority's chief negotiators. We had hoped to meet the Chief Negotiator for the Palestinian Authority Saeb Erekat, but unfortunately he proved to be otherwise engaged. Husseini made clear that little progress was likely to be made in the immediate future, due to the forthcoming Israeli elections, the change of US President and also the fact that there might well be Palestinian elections at the beginning of January. So while there is an Arab Peace plan up for discussion the week after next, it is not likely to get much traction. Olmert can't deliver the Israelis and it's doubtful whether Abbas could deliver wholesale support from the PA at this time, especially given the position of Hamas in Gaza. We asked him about Hamas and his hope is that they will lose electoral ground at the next elections after people have experienced the horrendous way they have governed Gaza over the last two years. He doesn't think they are getting much traction on the West Bank. He made the point that aid money can never replace the freedom to live in your homeland. He felt the economy of the West Bank was starting to revive after a very difficult few years, but poverty was still a real problem. Travel rights would remain a problem for families who have been split up. As we left, we visited the tomb of Yassir Arafat, which forms an impressive part of the PA compound. For some he remains a hero. For others, he was a man who led a completely corrupt regime.

So in the middle of the morning, we left the PA Compound to travel the short distance to the UNWRA Refugee Camp. More on this when I get back from dinner. And some pics!
Posted by Iain Dale at 5:18 pm

Most enjoying reading your daily updates Iain. Looking forward to the pictures. Is there anyone else in your entourage who is also blogging? If so, care to share the blog address?

Interesting how you Tories are clearing the 'pitch' in the UK at the moment isnt it?

You have lost the political arguement at home and now you are in Isreal sharing your 'wisdom' there! What a joke! Why didnt anyone warn Tel Aviv in advance?!

Stay there Iain - your work in the UK is done. Gordon Brown has seen you and the Tories off! Its time to elect yet another Leader of your Party I think :-)

Its just a shame you didnt take that pathetic Guido with you!

Is it me or has anyone else noticed that Iain and Guido have nothing to say anymore? :-)

What a fascinating guy you are. Thanks for sharing this.

Rafiq Husseini may be a good person but the people who deal with the Israel is above and beyond him. The Chief Negotiator for the Palestinian Authority Saeb Erekat is a well speaking English figure but a very tuff and stubborn one. The main problem with the PLO leadership is that they are lacking authority and power to make decisions and apply them to the last word. Now days the PLO leadership is so weak, as they say in the west bank, that Abu Mazen (abu Abbas) hardly control Ramallah itself. Hamas won in Gaza strip and draws steps and efforts into the west bank. They have large seed of Hamas in Hebron (Halil in Arabic) and few in Bet-Lehem, and spread units in some Samaria's villages. Even if the Fatah wants to proceed negotiations with Israel they can't, they are too weak. The Hamas can, but doesn't want. Unfortunately Abu Mazen can't deliver real talks with Israel.
The very annoying fact is that even the PLO didn't find, until now, any reason to recognize the existence of Israel. 16 years of negotiations and war of intifada kept them in their first position's line. Arab Palestinians have one big condition for giving their "recognition" to the existence of Israel and it is acceptance of the Arabs' demand to absorb most of the Arab 1948 refugees inside Israel; The "right of return". Sure it is the main obstacle for future talks between both sides. The bottom line is that even the moderated in the Fatah party demand the impossible from Israel.

In the meantime the Hamas rearranges its militia and sends long hand into the west bank. The Iranians and the Hizbullah already established a power post in Gaza and building secret cells Judea and Samaria. I think that the clashed are to be renewing again in coming few months.

Of course, nobody mentions the right of return for Jews from Morocco, Libya, Iraq.

For some he remains a hero. For others, he was a man who led a completely corrupt regime.

It is very possible to have lead a completely corrupt regime and be a hero at the same time.

Otherwise there would be absolutely NO POLITICAL hero's at all, anywhere in the known universe at any time. Or at least none that reached a history book for long. As history is always written by the winners. The winners always being the cleverest, most dishonest, most violent, most technologically advanced murderously evil bastard on the make. This may be an uncomfortable truth for us Brits, but it must logically be a truism.

May I submit as conclusive evidence for my above assertion, our own 3 times elected governments, entire 11.6 years in office?

Interesting that he's referred to as a 'martyr'.

Cause of death has never been revealed.

.....and simply adds to the confusion.

Incidentally, I am at a loss as to what this 'new confidence' is all about.

Is this a 'new confidence' in more taxes, more spin and lies, more sleaze, more illegal wars, more trough snouting, more expenses manipulations or more of the same old shit we've had for the past eleven years?

Yep, it's just you. Get some professional help before it's too late.

What a wishful thinking Dolly! Bottler Brown, Lord Sleaze and 'sexing up' Campbell in new confidence! It is the joke of the century

The shorter hairstyle is good for you as well. Very handsome indeed.

Jeremy Jacobs ;
Why to mention the right of return for Jews from Morocco, Libya, Iraq… ? Did the Jews make a big theatre out of this right? Jews who came to Israel from all over the daispora didn't stay "refugees" but started a new life without the UN controlling system and without being a burdon on the British treasury.
According to international law a refugee is one who left by choice or of forced to leave his/hers home place because of war. His children, and of course his children's children, are not considered to be refugees any more. But the UN decided that the common law won't be applied Only as regarded to the Arab Palestinians. Only Arab Palestinians, among the many millions refugees al around the world, have the right to stay refugees and to endow it to their children and earn donations from Britain and others, for eternity. Why? Because they are in a continuous conflict with Jews. The long Communist-Muslim coalition voted for that resolution, ignoring the rights of the vast numbers of their own hand-made refugees. The Arab strategy is to keep the war against Israel existence hot and alive. One of the implementing measures is to keep the refugee problem live and in topics. So the Arab leaders acting in order to maintain and enlarge these camps and not let their people look for other proper and honest solution. The UN keeps a full mechanism, called UNRA, just in order to keep the poverty of those Arabs alive.

Mr Husseini may be impressive at a personal level, but you were a guest in his house, so to speak, and Arab hospitality is generous but often dishonest. Ask him searching questions about Mohammad's character or behaviour, or if you could see the site of the Ramallah lynching, and you might be less impressed.

I wonder if Mr Husseini appreciates the effect that PA sponsored TV broadcasts, education and diatribes in mosques have in the West - i.e. to convince anyone who has eyes to see that people who teach their children hatred and racism really aren't trying at all.

I think you misread Jeremy Jacobs' intentions. I presume he means that the Jewish people were cast from their homes and expelled from Libya, Iraq and Morocco yet they and their descendants have not spent the time since proclaiming their right to return. They merely sought refuge elsewhere (whether in Israel or the Diaspora) and tried to live peaceful lives. I presume Jeremy seeks to highlight the contradistinction.