An Evening With Polly Toynbee 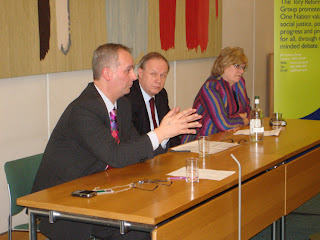 I had a very enjoyable joust with Polly Toynbee for over an hour this evening at a Tory Reform Group media panel. Peter Oborne had to go to Washington (as you do ) so it was just Polly and me. I was my sweet reasonable self, and rather disappointingly so was she. The only flashpoint came on crime where she insisted that all crime was lower and that people's fear of it was irrational and media-fed. I begged to differ and pointed out that violent crime was up, gun crime was up and so was nife crime. I also said that much crime goes unreported, but Polly pointed out that the British Crime Survey demonstrated that crime was still down. An audience member came to my rescue and helpfully told us that Under 16 criminals or victims of crime were not included in the BCS, not were white collar crimes.
I suspect I was not the foaming at the mouth rabidly right wing blogger she was expecting, and to be honest, she was so nice and pleasant that I couldn't bring myself to be as forthright as I might like to have been! I really am far too nice for this political mullarky :)
Posted by Iain Dale at 11:02 pm

From the photo it looks like you are losing weight while la Toynbee is looking suspiciously chubby. Good to see that you are taking the Glorious Government's advice on avoiding obesity.

No bribes for you to lose a few pounds then?

Ms Toynbee is indeed a pleasant person, bright, articulate and enjoyable to listen to.

But, she is however most on wrong things.

Polly Toynbee is not all bad. She is anti-religion and pro-gay, and so does not deserve the vilification heaped on her by right-wing commentators. (Just testing out my new "blogger" identity to see if it works; sorry if I am wasting people's time with a dull post.)

She is a bitch Iain but then you have always been a sucker for the patrician aristocracy ..(Its a gay thing )

"Polly pointed out that the British Crime Survey demonstrated that crime was still down. "

The British Crime Survey is not the definitive indicator that Polly portrays it as for at least four reasons:

1. Not all victim types are included in the survey. As you say under 16s are missed out, so are tourists and migrants.

2. Not all crimes are included, vandalism of businesses and public property isn't included, nor is drug dealing. There are other crimes not covered.

3. The response rate to crime surveys isn't brilliant and the poor who live in postcode areas with the highest recorded crime rates are the least likely to respond. So it ceases to be random.

4. People's recollection of crimes that have been committed against them over the course of a year is rather sketchy at best.

The BCS is not worthless but the idea that it's findings supercede those of all other crime indicators is simply wrong.

Government figures are so fiddled (take the CPI inflation rate for god's sake!) that nobody believes any of them, and crime figures are more easily fiddled than most. Take for example, another government claim about the reduction of the murder rate since it's peak in 2002, it is less than 2002, only because Harold Shipman has been a bit quiet of late! Also, as the audience member pointed out, a lot of crime is deliberately not recorded by the Home office and a lot of people don't report minor crimes unless they have to, for insurance purposes, because they know that nothing will get done about it.
Also, some crimes have been overtaken by better preventative security measures. More people have burglar alarms on their houses and have more secure doors and windows, than they used to (because they need to!) and car theft is less common because modern cars have much better security, and chavvy joy-riders cannot nick them like they could with older cars 10 years ago, there are a lot fewer old Ford Fiestas that could be stolen with a screwdriver, than there used to be.

Pull the other one, it's got bells on.

If crime is really down, why are the prisons full? Is Ms Toynbee telling us that some of the inmates are just there on holiday?

So Polly Toynbee believes that its perception of crime?
I wonder how often she walks in London, let alone at night.

Judging by comments by diablo above not at all.
I wonder what her annual Taxi bill is?

...and she seems finally to be having second thoughts about her role as the Brownite Unity Mitford.

Your slimming is causing you to look increasingly like Francis Urquhart. How splendid.

(What is "nife crime"? Do rises correlate with a decline in literacy levels?)

Should there be a repeat event, may I suggest to ask DK to acccompany you?

It's that tie again !

the compulsory 'crime is down' mantra - no public utterance is complete without it, whether it be the PM spaeking, or a humble PC, or even the exalted PT herself - should be howled down whenever it is heard.

It is straight out of the Doublethink manual: repeat the official party line even though it is contradicted by all personal experience

"isn't it wonderful, crime is down, all praise to the Party! now, about those knifings / internet frauds / Romanian crime gangs / etc etc"

Problem is that the Police have every incentive to go along with this dishonest nonsense because their bonuses are based on believing it. Likewise many Tory politicians at Council level - & most English councils are Tory-controlled - because they like to be thought to be succeeding in their public safety duties as well.

you are looking sylph-like

BCS also does not include rape and sexual assault crimes. Understandibly so, as it's not easy to talk to panelists about their experience of these crimes.

However, 1 out of 10 women had been victims of sexual assault since the age of 16 in 2000 - that was the last time, from what I can see, that BCS ran a special automated module on this topic.

The point is that you have to take BCS with a pinch of salt and it really irritates me when lefties and New Labour types quote it and point at it like they would the bible to try and prove their arguments.

So you're a victim of Polly's womanly charms then?

Good Heavens. Steel yourself, man. Sometimes the most charming animals have to be put down for the benefit of all.

The absolute numbers in the ONS and British Crime survey figures do have to be taken with a pinch of salt. However, providing the the survey and reporting procedures remain constant, they are extremely valuable in establishing trends within the various categories of crime.

Iain said: "I really am far too nice for this political mullarky."

Unless you're hiding behind your sock-puppets. Then all bets are off.

How exactly do you talk to a victim of murder or manslaughter then?

You were both very good, and the evening produced genuinely enjoyable debate. Polly Toynbee was indeed charming and pleasant, which made the occasional left-wing bombs all the more jarring when she dropped them!

"providing the the survey and reporting procedures remain constant, they are extremely valuable in establishing trends within the various categories of crime."

Perhaps, but doesn't that rely on the methodology being sound in the first place?

Crime statistics compiled by the police are not trusted because people, rightly, believe that many crimes are omitted.

To provide credible figures we have the BCS. Except that people don't believe that either. What makes you think the BCS is of any use?

For example, my neighbour was the victim of an attempted robbery whilst walking at night. The attempt failed because the dog she was walking intervened. There was no question of her informing the police. No one in their right mind goes anywhere near the police unless they have to.

Polly Toynbee would be invited to my imaginary dinner party, alongside you, David Cameron, Johann Hari, Peter Hitchens, Prince Charles, Lynsey Hanley, and assorted other people who can disagree with each other in a polite, civilised way, I've yet to finalise the full guest list and the seating arrangements (people with different views are seated next to each other for maximum interest and stimulation of debate) but it's a cracking idea. :)

I don't think nife crime is up Iain.

Unless you meant nice crime. Which is very much down. Or ice cream, which is cold.

Typical of journalists in the media these days, so lacking in knowing where the spellchecker is on the Tools bar...

(kisses and hugs as usual)

BCS also misses repeat crime - if you suffer 100 similar incidents in a year because say you have neighbours from hell the BCS records this as 5.

Only crimes against the person count so let's ignore shoplifting vandalism etc.

As usual, Toynbee is talking tosh.