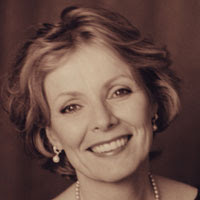 Peggy Noonan is not well known in this country, but to anyone who's ever written a political speech, she's a legend. She crafted Ronald Reagan's words throughout much of his Presidency. It was she who wrote the tribute to those who died on the Space Shuttle - "the surly bonds of earth". It was she who wrote Reagan's moving tribute to the Normandy veterans at Pointe du Hoc in 1984. Her memoirs WHAT I SAW AT THE REVOLUTION remain in my top ten political books of all time. She understood Reagan like few others, and it was for that reason that she was able to write such beautifully crafted speeches. However, anyone who has read his diaries knows that he put his all into their creation as well. He didn't just deliver them brilliantly, he played a huge part in the writing of them.

Why am I telling you all this? Because I have just read an article for the WEEKLY STANDARD which Peggy Noonan wrote just after Reagan's funeral in June 2004. I defy any Conservative to read it without having moist eyes by the end of it. Here's a short excerpt...

Walking into a room in the Capitol Wednesday before dusk: A handful of people
were standing together and gazing out a huge old white-silled window as the
Reagan cortege approached down Pennsylvania Avenue. The sun was strong, like a
presence. It bathed the women in glow. One was standing straight, with
discipline. Her beige bouffant was brilliant in the sun. I approached, and she
turned. It was Margaret Thatcher. It was like walking into a room at FDR's
funeral and seeing Churchill.

The cortege was coming toward the steps. We looked out the window: a perfect
tableaux of ceremonial excellence from every branch of the armed forces. Mrs.
Thatcher watched. She turned and said to me, "This is the thing, you see, you
must stay militarily strong, with an undeniable strength. The importance of this
cannot be exaggerated." To my son, whose 17th birthday was the next day, she
said, "And what do you study?" He tells her he loves history and literature.
"Mathematics," she says. He nods, wondering, I think, if she had heard him
correctly. She had. She was giving him advice. "In the world of the future it
will be mathematics that we need--the hard, specific knowledge of mathematical
formulae, you see." My son nodded: "Yes, ma'am." Later I squeezed his arm. "Take
notes," I said. This is history.

When I'm in America the week after next I hope to meet Peggy and interview her on camera about her life working in the White House. If it comes off, it will be the highlight of my trip. Do read the aricle in full HERE.

The quote on 'slipping the surly bonds' actually comes from the best poem on flying ever written, 'High Flight', by John Gillespie Magee, Jr, who was an American volunteer who served in the RAF during the second world war and was killed at the absurdly early age of 19, I think. The full poem is:

Oh! I have slipped the surly bonds of earth,
And danced the skies on laughter-silvered wings;
Sunward I've climbed, and joined the tumbling mirth
Of sun-split clouds, --and done a hundred things
You have not dreamed of --Wheeled and soared and swung
High in the sunlit silence. Hov'ring there
I've chased the shouting wind along, and flung
My eager craft through footless halls of air...
Up, up the long, delirious, burning blue
I've topped the wind-swept heights with easy grace
Where never lark or even eagle flew --
And, while with silent lifting mind I've trod
The high untrespassed sanctity of space,
Put out my hand, and touched the face of God.

Much as I admire the Saintly Mrs. T neither her speeches nor Reagan's come close to Winston Churchill's triumphs of lyricism and sinew.

Whilst disliking the little pretender in every other conceivable way, Barack Obama hit the nail on the head when he described President Reagan's legacy as changing the trajectory of the US (for the better), giving a sense of genuine optimism, dynamism and courage.

I look forward to seeing the future interview with Peggy.

She writes like Hemingway, but like many women she never forgets and always holds a grudge and never misses an opportunity to seek revenge.

This remarkable woman uses the occasion of the funeral of a great President to trash her work colleagues. The larger part of the article is devoted to snappy invective towards her erstwhile colleagues at the White House, what Jack Wheeler (the putative originator of the "Reagan Doctrine") described as "A spasm of spite"

Do try to retain a little objectivity when you meet her, Iain.

was 'the surly bonds of earth' a quotation?

I've heard the poem but never knew who wrote it, or its significance.

Are you going to tell us his name ?

Newmania - Churchill was like any other political leader, and had a team of speechwriters (particularly during the war).

Makes Thatcher sound like a dotty old woman, not sure that was the intention!

Not only did Churchill not write a lot if his speeches he didn't give them either as I understand an actor acted as voice double for many of the radio broadcasts.

Anon 5.16. You "understand" that Churchill's speeches were sometimes given by a voice double. Given his reputation that is a severe accusation and requires to be supported by evidence.

WW - You bade us all a final farewell, if I recall, around four or five months ago. Back already for a final farewell world blog tour? Is your daughter Liza Minelli accompanying you?

Anony 5:16 - You understand that Winston Churchill had a voice double from where? A dream you had? Something someone told you in a pub? Where do you "understand" this information from?

Patriccus - About Obama: He's handsome, he's personable, he has presence ... yet I'm with you. There's just something about this fellow that gives me the creeps.

That was a great read, and tho I'm not a fan of the politics of Thatch or Ron I understand the import of what Ron achieved. At the time I was a red star wearing, Gorby loving, card carrying member of the CPGB. And Gorby loved him so what's to question? I left the CPGB shortly after voicing this opinion under a black cloud.

But what really endeared me to Ron was when he appeared in the Frankie video. What?

Thank you, Iain, for highlighting this article. You were right - I did not keep a dry eye for much of it.

In the closing paragraphs she claims her own contribution was "sung". Perhaps it was in the closed circles of DC or now, in retrospect and with the benefit of hindsight. But outside that small group she was unknown.

For me, Peggy Noonan was as vital to the Reagan revolution as Nofziger, Speaks, Fitzwalter, Atwater and countles others. I greatly admire her work.

I hope you do have the opportunity to meet and interview this amazing lady. I often re-read (or now, thanks to YouTube, replay) President Reagan's D-Day speech, which was probably her finest work.

You know, Verity, you need kissing badly. That's what's wrong with you. You should be kissed, and often, and by someone who knows how.