Winning from a Crouching Start in Chatham 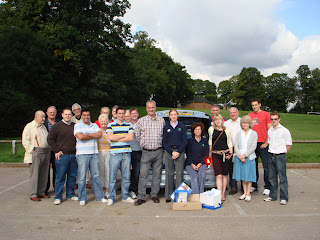 Yesterday I was offered a ticket to go and see West Ham play Reading this afternoon. I turned it down, partly on the basis that if I went, we would lose, but more due to the fact that I had already promised my friend Tracey Crouch, Tory candidate for Chatham & Aylesford that I''d go and give her a hand delivering a residents' survey to the good burghers of Chatham this morning. And if I pulled out she'd lynch me. True to form, the Hammers won 3-0.

Tracey managed to get no fewer than thirty four people to come out to help her deliver more than 20,000 residents surveys this morning. Most of them were locals, but she is the sort of person who inspires tremendous loyalty in her team and several of her colleagues from her time as David Davis's chief of staff turned out too, having come down from London. Chatham & Aylesford is the sort of seat the Conservatives need to win if they are to have any chance of forming a government. Boundary changes have not been kind and she's got a notional majority of 4,000 to overturn, so she needs the Party to be performing strongly. She gave me the area around Dale Street in Chatham to deliver, thinking that was highly amusing.

The funniest moment of the day came via my West Ham blog. I had written a post explaining I wasn't going to the match, and then a reader called "Rooster" posted a comment saying he lived in Chatham, and what do you know, two minutes later he wrote this...

As I wrote that post the Tracey Crouch newsletter entered my letterbox. She
will get my vote, she is ten times better looking that the Labour candidate.

West Ham fans are people of impeccable taste, dontchathink? Pity Tracey is a Spurs fan. Nobody's perfect. She does have a very good blog, though. Exactly what a candidate blog should be like.

If only politics was always as much fun as a game of football........

maybe that's why politics from Dale is easier to read than other places - the sense of fun I mean.

the new banner's good - except there's plenty of room for your dog still iain - somewhere in the blog...only if you want to of course. Not everyone's hooked up on football, and some of those who are not, will be dog lovers. it would give you even more reach than before. Politics, publishing, football, dogs..is there no end to this man's talents?

One thing from the Telegraph poll doesn't seem to have come out. The Scottish figures which must be keeping Brown up at night.

Second lowest levels of support for Labour in the areas YouGov breaks down.

Thank you for coming today Iain. I really appreciated your time. I only sorry that I learnt the Spurs score from you afterwards!

Is that a ruler on your pocket, our where you just happy to be there??

Tracey? Spurs? Are you having a Ming Campbell likes the Arctic Monkeys moment?

Even I know that Spurs is not West Ham and I hate football and don't know my offside from my armpits.

egg face and on.

Bellamy, Bowyer, Neill- I am glad that I do not support such a team; what a bunch of unpleasant thugs.

In a country that had one of the most boorish, bad mannered and self centered thugs as it's deputy prime minister for over 10 years it would take more than a couple of dirty players to dictate my footballing allegiance..... although your point is well made.

Iain,
I grew up a few yards from Dale St, Chatham. You have a lot of work to do to make that area Tory!
From your point of view, three cheers for Aylesford.