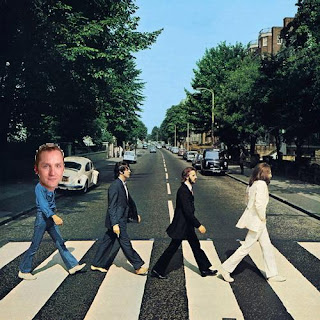 Well the mans a bit of an arse, no doubt about that.

Serious stuff Yougov in tomorroes Telegraph still showing Labour with an 11% lead. Looks like GE on.

Mendacious wanker - I just knew that there would be some 'rowing back' and excuses about 'internal use only'..

And he has the audacity to lecture the broadcasters about their recent behaviour...

To paraphrase Alistair Campbell -
If he was a Blue Peter Editor, he'd have resigned by now...

I'm not sure which is more apposite - 'Zelig' Purnell, or James 'Forrest' Gump...

Interesting that while the BBC were laying into Boris Johnson, they did make an exception and also gave New Labour James a kicking, no doubt judging that it is either payback time, or that spreading the guilt around would make them look good..

Careful with that picture, or you'll set off the Paul is Dead hoax again.

To recap...Lennon is dressed as an Archangel, Ringo as an undertaker, and George/Purnell as a gravedigger. Paul has no shoes on and the car in the background shows the number plate 28IF, which would have been McCartney's age if he had not been killed in a car crash in 1967.

One of the best conspiary theories ever, I've always thought.