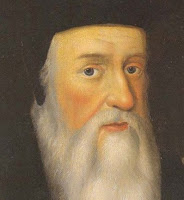 As you know, the GUIDE TO POLITICAL BLOGGING 2007 is being published on 24 September. Featured among the 288 pages are a myriad of blog lists. Over the next two weeks I will be publishing these on the blog. Today we have the Top Ten Religious Blogs.

9. Thoughts of a Random Ordinand

There's a lot of sense from the other side of the pond at The Fly-Fishing Rabbi http://www.theflyfishingrabbi.blogspot.com/


"He married a woman named Joan, the daughter of a local tavern-keeper, he lost his fellowship, but following his wife's death during childbirth, Cranmer was able to continue his studies.........suspicious ..............Osiander became Cranmer's 'uncle-in-law'. Despite being an ordained Roman Catholic priest – an archdeacon – and thus celibate, Cranmer secretly married Osiander's niece, Margaret. Cranmer was a widower and this was his second surreptitious marriage........
Cranmer gave Henry a letter with the accusations against Catherine on 2 November 1541, as they attended an All Souls' Day Mass. Henry at first refused to believe the allegations, thinking the letter was a forgery, and requested Cranmer to investigate further the matter. Within a few days, Cranmer found corroborative proof, including the confessions issued from two men after they were tortured in the Tower of London; as well as a love letter written distinctively in Catherine's handwriting to one of them.
Although Cranmer is credited with the overall editorship and structure of the BCP, its detailed origins are obscure. A group of bishops and divines, drawn from both conservatives and reformers, met first at Chertsey and then at Windsor in 1548 and agreed only that "the service of the church ought to be in the mother tongue".Cranmer was a great plagiarist; even the opening of Preface (quoted above) was borrowed.
The subservience with which Cranmer met Henry's uncontrolled demands, as well as the timorousness which made him sell out his friends and be complicit in acts of intolerance and religious violence, are scars on his legacy.
Mrs Cranmer's box
Mrs. Cranmer's box is a ribald reference to the hidden existence of Cranmer's second wife, Margaret, and her means of concealment. It describes her travelling method between Cranmer's houses. The tale arose that:
He kept his woman very close, and sometimes carried her about with him in a great chest full of holes, that his prety nobsey might take breath at.[

He seems to have been slippery and libidinous character who kept women in boxes and was culpable in the victimisation of his fellows . I `m not at all sure that this Cranmer is in any position to sermonise about the moral morass in which we flounder although he does write a decent blog .

How many kinds of political blog can there be? And why does a list of religious blogs count as political?

Yeah, I was wondering what counted as a religious political blog too.

What was the criteria for defining these 10 blogs as 'the best?' Is it because they offer a balanced informed view of their religion? Is it because the writer of each blog offers an witty insight to religion in modern times? Or is it based on 'my best mate writes this blog and I like it....'

Hmmm... I don't know how you measure the 'best' religious blog either... I mean, trying to apply rational measurement to religious types??

And I agree with the question about why at all religious blogs are appearing here - another symptom of the dangerous malign and corrosive-to-politics encroaching of religion on modern politics I suppose?

While His Grace is humbled and honoured to be named top of this list, perhaps he can offer some enlightenment to those who don't quite get the political link.

His Grace takes as his inspiration the words of Sir Humphrey Appleby: ‘It’s interesting,’ he observes, ‘that nowadays politicians want to talk about moral issues, and bishops want to talk politics.’ It is the fusion of the two in public life, and the necessity for a wider understanding of their complex symbiosis, which leads His Grace to write on very sensitive issues ‘with moral seriousness and intellectual rigour’ (ConHome). One only has to consider his post today on Iran to appreciate that religion can have profound implications for politics, and the politics of many is frequently found to have a foundation built upon their faith (Blair and Brown to name but two). Of course it is rarely overt or acknowledged (except perhaps in the United States), but it is very real.

It is for this reason that His Grace likes to dig behind the political facade to discover the religious roots - whether healthy and edifying or rotten and corrupting.

I actually find Ruth Gledhill's blog on the Times site far more informative than your top one.

Cramner is alright, but frankly all he does is take stories in the media and regurgitate the classic 'Muslims are taking over and us Christians should watch out' narrative. It's so... early 2007. It's too easy to poke holes in his arguments.

You could have been a bit more robust Iain.

Firstly, I agree with everyone who said that Ruth G should be on the list.

Secondly, your number 9 only has a technorati authority rating of 9 whereas my own blog (An Exercise in the Fundamentals of Orthodoxy) is somewhat higher and more controversial...

Cramner is alright, but frankly all he does is take stories in the media and regurgitate the classic 'Muslims are taking over and us Christians should watch out' narrative.

Clearly this is someone capable of reading just a tenth of the content and caricaturing it to fit a prejudice. From the most recent posts, where in the MSM has there been any analysis of:

The theology of Iranian politics?
Iain Dale's religious survey?
The 'treason' dimension of the Reform Treaty?
The EU day against capital punishment?
The imperative of Higher Criticism for Qur'anic studies?
An appalling sermon in St Paul's Cathedral?
Semantic analysis of the meaning of 'constitutional concept'?
The Dianification of politics?
etc etc etc

Obsessively on one theme? Muslims taking over and Christians beware?

Hi will there be a guide to art blogs? If so you might want to check this one, becoming quite popular. Love your blog by the way.
http://pollocksthebollocks.wordpress.com/

Oh, I've been reading your blog for a long time Cranmer.

You say: It is for this reason that His Grace likes to dig behind the political facade to discover the religious roots - whether healthy and edifying or rotten and corrupting.

Except your analysis is more about regurgitating silly ideas than actually doing any useful digging.

For example, the other day you pointed to a story in Austria where they wanted to stop building mosques. Amusingly, you pointed out that Saudi Arabia also restricted minority religions from exercising their freedom, without getting the irony that you're in fact recommending that Austria become repressive like the Saudis.

And then were was the ludicrous stance on the Sikh man in Ireland who wasn't allowed to join because of his turban. In other words, religious freedom for Christians but other religious minorities should "fit in". I could tear your logic to shreds in minutes if I could be bothered to waste that much time.

Not that I'm saying your blog is entirely crap. But no.1? Don't think so. Both Ruth and Libby are far more informative.

His Grace could doubtless tear your 'logic' to shreds also, if he could 'be bothered to waste that much time'.

If all you gleaned from the Sikh turban post was that His Grace is in favour of religious liberty only for Christians, you clearly have no comprehension of the difference between religious orthodoxy and cultural manifestation. It is a point clearly made, which you totally ignore to suit your own prejudice.

Ultimately, one's 'Top' anything is a subjective list of preference. That His Grace's position (the first time he has come first in anything) irks you, is simply down to the fact that The Times does it for you. Yet the most cursory analysis of traffic and the number of comments per (usually very brief) post would indicate that The Times elicits nothing like the quality and quantity of interest that other religious blogs do.

Surely a 'religious' blog has to be theological, rather than simply express the relatively superficial journalistic opinions of a 'religious' person, and therein lies the weakness of both The Times and (to a much lesser extent) The Telegraph.

That His Grace's position (the first time he has come first in anything) irks you, is simply down to the fact that The Times does it for you. Yet the most cursory analysis of traffic and the number of comments per (usually very brief) post would indicate that The Times elicits nothing like the quality and quantity of interest that other religious blogs do.

Let's not start willy-waving shall we Mr Cranmer... the list is indeed subjective and hence I stated my own views. Otherwise I'm going to have to start citing the number of comments we get and the Technorati links etc. I don't want to embarass you on that.

you clearly have no comprehension of the difference between religious orthodoxy and cultural manifestation.

Oh, but you see I do. This is the same excuse the Saudis would use for their own repressive behaviour and one that you are happy to support without getting the irony. When the Muslims do it then it's repression. When the Christians do it, then it's "cultural manifestation".

When the Muslims do it then it's repression. When the Christians do it, then it's "cultural manifestation".

Since this is not what His Grace believes and neither has it ever been stated by him, it clearly establishes that you have understood nothing of what His Grace has said. You are simply content to propagate the superficial caricature.

Thanks for the great links.
I was especially pleased to see the one to Ummah Pulse - I hadn't heard of this site before.
It is really good to see such a well turned out blog written by Muslims. Whilst I may not agree 100% with everything on there, they do agrue their points well and offer a moderate perspective on current events.
We need more Muslims like them - they seem to be the 'voice of the silent majority' unlike the Muslims who usually get themselves on the telly!
By the way your blog has become compulsive reading for me!
Cheers

I really like your Top 10 guides. Excellent for lazy sods like me who can't be bothered to look for good sites myself.
There are a good bunch of sites here - really like Auntie Joanna Writes.
UmmahPulse is also a bit of a find. Every other time I have tried to look for a good Muslim perspective all I get is ranting nutters wanting to take over the world - which having many Muslim friends I know to be a very poor indication of what normal Muslims want. UmmahPulse is great - well argued out discussions and a good debating ongoing with a lot of subjects.
I reckon you should add it to your daily reads. I agree with Andrew - I don't see eye to eye with everything they have on there but you just can't go past authentic Muslims expressing their views in a constuctive way.
Well done for finding it.
Cheers
PaleAleMale

This is an extremely weird list of religious blogs. I can't see how anyone interested in UK based religious journalism could exlude Ruth Gledhill (The Times) and William Crawley (BBC) from the list. I wouldn't miss either on a daily basis.

Here's one reason why Politics and Religion might be talked about on the same blog, especially in Commie Britain.