Dressing to the Right, Sir? Suits You Sir 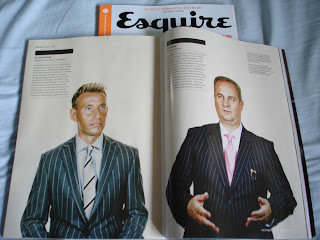 Six weeks ago I got a call asking if I would like to do a fashion shoot for Esquire Magazine. Naturally I thought someone was having a laugh at my expense, but no, it turned out to be true. Esquire wanted to shoot a session with seven male Tories which they have called DRESSING TO THE RIGHT. Ha ha. So off I toddled up to a studio in north London where I met the photographer Nadav Kander and Esquire's political editor, Joe Phelan (now that's a job I'd like to have!). And, well, this is the result. I have to say it's not a photo I shall be requesting the original of! If that's the best one out of the 100 or so they took, then Christ alone knows what the rest of them were like. The others to take part were Jesse Norman, Damian Collins, Kulveer Ranger, Jeremy Brier, Chris Philpand David Bull. I reckon Kulveer's picture is the best. I don't think I shall be rushing to repeat the experience.
Note: The suit they made me wear is £575, the shirt £70, tie £70 and the pen £295! All by Abercrombie
Posted by Iain Dale at 4:30 pm

I don't mean to be overly harsh, but your hand posture looks like you're trying to hold in your belly?....

Could by worse, Iain.. the other chap looks embalmed

Did you get to keep the suit etc ?

Letters, probably I was!

Iain, your media tarting is starting to make you look a bit 'needy'.. give it a bit of a rest - you don't want to become 'overexposed'..

Were you wearing Abercrombie & Fitch??
Was it? :)

Not bad Iain, not bad - it could have been worse.

575 quid for a suit? They were really trying to make you look bad even before they screwed you on the photo retouching and shot selection. You shouldn't be seen outside of bespoke or old-line Saville rack suits, though a bit of creative flexibility about sourcing may be useful for the media.

All of the men's mags - lad or "quality" - are run by the most ridiculous gulfstream leftists. Think Polly Toynbee, but more so. Any dealings with them need to be on terms such as those of the Daily Star or the Observer - i.e. with them under floodlights in one of Her Majesty's deeper dungeons before sending them to their reward for continuing to aid and abet crimes against humanity by stalinist and jihadist leaders everywhere.

This was always going to be a hatchet job, and unless you have full control over the pictures used, with some exceptionally high indemnity for any "mistakes", it is insane to treat with them.

Obviously you could use more exercise, more salad, and less other food, but a proper tailor, proper posture, and better colour choices would do wonders. If you are in a hostile photoshoot, do remember to always stretch your neck and look level or upwards. We all look like crap when we look down or tuck in our chins.

Is the pen actually in your breast pocket? Oh dear. They might as well have asked you to put a pencil behind your ear as well.

If you were not offered a generous fee, then it is bit off not to be given the suit.

They should have got Douglas Murray on board. Is it true that The Only British Neo-Conservative was once voted one of Scotland's most eligible bachelors?

I thought you'd banned offensive stuff from this site?

You should have done a runner.

I would not be seen dead wearing a downmarket Chav brand like Abercrombie & Fitch.

Go to a decent bespoke shirtmaker like Sean O'Flynn or Budds. Chuck out your overpriced Duchamp ties and buy 7 fold ties from Italy, e.g. Carlo Franco.

Finally, get rid of the Audi (the German Mondeo) and buy a Morgan or Bristol. (BTW, PJ O'Rourke was spot on when described Porsches as ass-engined Nazi slot cars.)

Then you just might look a true Conservative with style!

PS I witnessed Damian Collins turning up to a candidate interview wearing a cheap glued suit and no tie. He looked like a slob. I can only hope that he dresses better now.

Thanks for your kind words Trad Tory.

I only attended an interview once wearing a tie - and that was 5 years ago. From memory I wore a blue Richard James suit.

It looks like you had got the whole world in your hand and you dropped it...

I think Iain means Crombie not Abercrombie (just checked my copy of the magazine). I think it's safe to say suits don't feature on the Abercrombie and Fitch range these days. (Splund - fashion tart)

Trad Tory - PJ may have been on the money about Porsches but that didn't stop him driving a 911 for years. His line on the Mercedes Benz was one of his best... "There are many devices available to increase sexual arousal in women. Chief among these is the Mercedes Benz 500SL" (or something along those lines)

sorry - following my comment above, that should have been that I only attended and interview once not wearing a tie, and that was over 5 years ago

OMG!!!! A real 'Gilbert & George' moment. It's ALWAYS a bad idea for 'politicians' to have ANYTHING to do with fashion!!! I remember a conservative 'top-dog' meeting years ago where the dress code was 'casual'( i think it was after Hague was elected Leader). I have never laughed so much ( that's a lie- i nearly karked it watching 'it's a royal knockout', 'the Brits' in 1989 a close second!) when parts of this was televised. The best bit was, i think, John Redwood doing 'casual'. Bless him.

Does David Bull not realise that having skin camoflauge that could see you blend in to the walls of an oak-panelled room looks completely ridiculous?

What is the world coming to? I have to agree with 'Fenners' regarding David Bull's new use of Creosote. May sanity resume, and i shall start disagreeing with 99.9% of what 'Fenners' comes up with next! Btw- Rob, get back onto LDV. It's even WORSE since you left.

Never buy it, maybe I should go back to reading lads mags, the visuals are usually better.

Having said that I would not be inclined to spend too long staring at a load of middle-aged men in pin-striped suits.

Whilst the Tories are to be congratuated for acknowledging the pinl vote, I'm not to sure the same can be said of lads mags if they want to maintain circulation!

How will you live this down?

Don't they give out free suits anymore Jailhouse? LOL "You get your meals quite regular, and a brand new suit besides, come inside you silly bugger, come inside".

That's an order ! Your writing is far too good to go to waste !

They really should have used the one with the guinea pig.

Your anon correspondent(12.24 p.m.8/9/7) had it right as well as the "Freedom and Whisky" blog.
The question is are you Jack McConnell's evil twin or is he your's?

Is that the guy from Bros to your left?