Screwing Up by Mark Oaten 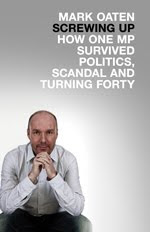 Rachel Sylvester and Alice Thompson have interviewed Mark Oaten about his new book, which my company has published, in today's Times. Read it HERE. Here's an extract...

Even before the scandal broke, when he was the frontbench home affairs spokesman, he was regularly taking antidepressants. He thinks at least a fifth of MPs have mental problems, although he says: “Round here it is a taboo subject. Very few will admit to not coping with the stress. You can’t be vulnerable or weak if you are waiting for the next promotion.”

There is, he says, “something in the DNA of politicians which makes them vulnerable to mood swings and being depressed. They are likely to be obsessive, risk-taking and slightly depressive”.

His explanation is that certain character flaws make people want to stand for Parliament. “My risk-taking makes me a good politician and a bad one. But the risk element is only one side. It is even more common for MPs to need to be loved. Ego and needing to be liked are dangerous traits.”

Many MPs are, he believes, damaged souls. “You seek your parents’ approval, then your family’s, then the party’s and then the voters’. I see politicians in their early thirties doing exactly what I was doing — running around the television studios, checking their BlackBerries, taking every opportunity. I want to say, ‘Calm down, go home to your family’. I wish someone had said that to me.”

The pressure is, in his view, made worse by the difficulty in making real friendships at Westminster. “There is a bonding between MPs, but it can’t be genuine — you are always ultimately competing. You are rivals.” He hopes that his memoirs will serve as a warning to other politicians. “I would like them to learn from someone who screwed it up and got it wrong.”

Mr Oaten’s downfall was spectacular. When he saw two journalists outside his front door one morning in January 2006 he had no idea that they had discovered his liaisons with male prostitutes. After speaking to them he had to go inside and tell his wife everything while their two young daughters carried on having breakfast in the next room. Even now he cannot quite explain it to himself, let alone to her.

“Everyone is desperate for an easy answer about why I went to an escort. I had doubts about my sexuality, I wanted to experiment, I was stressed out, feeling low about getting older. The press kept talking about the fact I was losing my hair. I was feeling out of love with myself.”

The rent boy was 23. “I wanted to recapture my youth and be near a young person — it was important that he was younger. I had a belly appearing and bags under my eyes. I wanted to experiment with younger people. It is not uncommon for 40-year-olds to want to experiment sexually.”

He found the number at the back of a magazine. “It was very late at night when I went to his flat, there was an element of risk-taking. I knew it was dangerous, there was an adrenalin element.”

Over the next six months he visited regularly. The News of the World said that he enjoyed three-in-a-bed “romps” and “humiliation”. “We never actually had intercourse. We talked, had a conversation about where he lived, but I was only there for about half an hour each time. We didn’t watch TV or relax together. He had a flatmate — that was the other one. He didn’t become a friend. I don’t even know his real name.”

There were lurid allegations made, which he says are untrue. “There were the most graphic descriptions on websites about what had happened, which were wrong but I couldn’t sue. It would drag everything up.” It was almost a relief to him when the story came out. “I could get counselling, talk to Belinda and try to feel more comfortable about who I am.”

When Mark first talked to me about publishing his story I was in two minds. On the one hand I felt it would be an interesting story to tell, but on the other I was determined not to push him into areas he didn't want to go. In the end he has produced a highly readable, very personal book about what life is really like in Westminster with graphic descriptions of the kind of pressures experienced by politicians of all parties. Neither of us pretend that it is a great work of literature. Mark writes as he speaks. It's a very conversational book, but also quite an emotional one. If you want a book full of lurid detail you will be disappointed. That was never the intention. But if you want to read a warts and all story of a politician living on the edge, in danger of falling into a chasm of depression but coming out the other side, you'll enjoy it.

This extract is a case study in how to lie plausibly. The trick is to say as many true or believable things as possible and then to use these to bury the key falsehood. If you did want to admit that you had seen rent boys (because there was incontrovertible evidence) but wanted to deny that you'd had sex with them, this would be the way to attempt it.

Given what is going on at the moment, and given who is getting hurt, books on the anquish of MP's are not a first priority.

Iain Dale: "...about his new book, which my company has published"

Ah, that perhaps explains better why you were so vehement in censoring my view from a week or so back rather than your stated dislike about my then nom-de-plume (a ribald spoonerism).

As I said then, and as you eventually allowed, I'd almost rather eat excrement than read it.

I'm sure I'm a reactionary bigot, but I really have no interest in reading the ramblings of a politician who thought a valid excuse for hiring rent boys was fear of balding.

So politicians suffer mental problems? I have no doubt they do, due to fear of exposure of their troughing ways. Many normal people suffer mental problems... largely brought on by the insufferable ways of politicians. It isn't a lot of fun watching your business go down the pan because of what the poor politicians proscribe. Red tape all the way, and they don't care, they just want their expenses preserved.

I have to stop before my language deteriorates.

If only he'd used a chat line like Simon H. instead of visiting the young person's flat, he might still be Shadow Home Secretary.

"It is not uncommon for 40-year-olds to want to experiment sexually."

"We never actually had intercourse."

Why would Oaten want to justify sexual experimentation if he and the rent boy never actually had intercourse? Sounds odd to me.

"There were the most graphic descriptions on websites about what had happened, which were wrong but I couldn’t sue. It would drag everything up."

Drag what up? What is it you're not telling us?

To say the least, this man seems to be a bit economical with the truth.

I have no interest in Mark Oaten's sexual experiments and, with respect, they are not the issue.

What will be of greater concern to his constituents is that they have an MP who has to struggle with such problems of his own that he clearly cannot the best candidate to take on theirs and those of the nation as a whole.

That other MPs also have serious personal problems is an argument that they also should make way and not a reason why he should stay.

I agree with Biscuits, Oaten is trying to excuse his infidelity with mental illness, which is pretty despicable on so many levels. The fact he chose to be temporarily gay (sic) is besides the point, although linking it with mental illness strikes me as a bit off.

Hopefully this is his swan song because I find him remarkably disingenuous, even for a MP.

I won't even start on my opinions of him saying he'll step down at the next election, obviously hoping it'll give him time to find a media gig.

I do not give a toss about Oatens book - which I suppose is an appropriate dismissal.

"something in the DNA of politicians which makes them vulnerable to mood swings and being depressed. They are likely to be obsessive, risk-taking and slightly depressive "

Total garbage - lets hope so in the case of Obama anyway.

You are 40 with a wife and two children and go to a rent boy? An experiment? From every angle its an experiment in hypocrisy.

Never warmed to him. Doubt I will now.

Anonymous 2:44 - he was not Shadow Home Secretary - he was the Lib Dems Home Affairs Spokesman. The Lib Dems are not the Shadow Government as they are NOT Her Majesty's Loyal Opposition - the Conservatives are.

I do hope Mark is now not as frantic as he was. Perhaps he has matured into who he wants to be sexually, and is at peace with himself.

Seems a bit rum to castigate the man too harshly. Only he knows the real truth, and if this book is stab at telling it, fair dinkums. As a politician, though, he wasn't particularly interesting.