Daily Politics: Who Will Cover For Anita Anand? 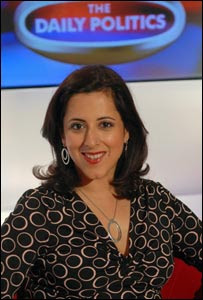 Many congratulations to Anita Anand, who has been visited by the stork and is expecting. That means Peter Allen will have to find a new sparring partner on Drive (step forward Asma Mia) but more to the point the seat next to Andrew Neil on the Daily Politics will become vacant. That set me wondering who would be a good short term cover for Anita's maternity leave.

Jo Coburn has stepped into the breach before but she will probably be otherwise engaged on election coverage. Other potential candidates could be Petrie Hoskin, who hosts a nightly phone in on LBC. She's got the right kind of sense of humour which Andrew likes to feed off. Or perhaps Victoria Derbyshire, Jane Hill or even Fi Glover?

Its a fairly crucial period to cover as it will be in the runup to the election so it probably needs to be someone who is an experienced interviewer. My vote would go to 5 Live's Shelagh Fogarty - and not just because she happens to be a friend! She has the interviewing experience, a waspish sense of humour, a good political brain and perhaps just as importantly has worked well with Andrew Neil before on 5 Live.

UPDATE: Apologies to Jo Coburn for spelling her name incorrectly. I know how she feels.
Posted by Iain Dale at 10:45 am

Why must it be a woman?

Has anyone else noticed that every time you turn on BBC News there is a different presenter / outside reporter that you never see again? There must be thousands of them. No doubt Brillo will choose a bit of thinking man's crumpet from amongst them. Let's hope it's Asian Totty as that would give us a chance to get Private Eye to publish that photo again.

Why a woman? If that is a requirement then almost anyone but the vile Victoria Derbyshire - "nnnh"

When DP looks for a new presenter is a true totty hunt. Brillo has a good good eye for thing kind of thing. I trust he won't let us down.

To watch Anita,Jo,Jenny makes DP the best TV program in my day.

If its anything like the rest of BBC News and Current Affairs they'll probably offer it to Beyonce or Lady Gaga in order to make it more attractive to the intellectually challenged.
The programme will be overlaid with loud music and inappropriate images of food, fireworks and fun fairs in order to emphasise the BBC's contempt for serious and/or informative subject matter and their current policy of employing idiots. Like all other BBC output, a large part of the programme must be devoted to a mind-numbing ooh-isn't-it-awful item about some boring distant part of the world.

There appears to be less English people employed at the front end of news presenting these days.

Channel Four News should be reported to Trevor Phillips. It is certainly unbalanced.

I think Arlene Phillips should be used, she is not employed these days!

But, for once could the English be represented, please?

For God's sake, not Fi Glover.

Someone who is pleasing on the eye.

Bring back Jenny! The Bank of England is bust, so hopefully Jenny Scott can be persuaded to come back and brighten our days on the Daily Politics!

Definitely not Victoria Derbyshie though - have never forgotten how astounded she was when she realised she was misreading a poll showing how genuinely EU-sceptical the British people. Too dim and too Guardianista for the the DP.

Joe Coburn is okay, ust, but she's a bit too much of a standard BBC hack, with the emphasis on hack.

Anyone else want Jenny Scott back?

I would say the excellent format of 'This Week' would be ideal so for me Michael Portillo and that horrid bird Diane 'I'm a soclalist' Abbot, but send my son to a private school & have private medical treatment.

Make it more relaxed and maybe we can catch a few of these putrid politicians out.

Also a weekly spot >wednesday< where guest bloggers are brought in. Can you imagine Guido or Old Holborn getting to grips with the dancing queen Vince Cable, the economist and Lib Dem imbecile who is to ecomomics as Gordon Brown is to honesty. But still better than Foggy Clegg the 40 women a night man.

It doesn't really matter since 5-Live is just tabloid-trash radio anyway. Nobody with a grain of sense expected to get reasonable or informed news and debate from 5-Live.

Not Fi Glover - she is a typically biased BBC left-winger. I recall her on Saturday Live a few years ago, having just done a piece with a Labour MP, state that she wasn't looking forward to the election because she would "have to do (i.e. interview) a Tory".

I can't see how she could be a credible presenter on a political programme having demonstrated this type of partiality.

Victoria Derbyshire? She seems ignorant on radio, only interested in issues that relate to parenting or alcohol. Brillo would humiliate her, she'd drown.

There are plenty of good choices out there.

Must be dozens of suitable labour-luvvies available in the BBC.

Having been 'visited by the stork' - what, exactly, is she expecting?

What about Sophie Raworth who did a fair job standing in for Marr on his plugging Labour show.

Hmmm... Even the slightly dippy Emily Maitlis would be better than the execrable Fi Glover or hideous Victoria Derbyshire.

I think the Arlene Phillips comment was a joke, but even she would be better than either of those two.

'Any other suggestions?' How about another man?

Perhaps when Brillo has a holiday though we could have Victoria Derbyshire and Fi Glover? That would give me a chuckle

I agree, Iain. Shelagh Fogarty would be wonderful. And I also agree with several other commenters that Victoria Derbyshire should be given an ASBO to prevent her entering within 100 yards of a microphone.

I suggest a certain Mr Iain Dale covers for her during this period. He seems to like getting his face on the television...

How about Martha Kearney ,or would she be too good for A.N?

How about that nice young lady Brillo is often pictured with in Private Eye?

What about that horse lady, Clare Balding?

Anita is the most gorgeous woman on television, and nothing will serve as a substitute for her hypnotizing eyes. I wish she'd hurry back. Brillo has been v v lucky with pretty-yet-brainy-and-still-homey women on that show. He will struggle to find yet another one.

Fern Britton.
Good interviewer, available, possibly on the cheap as it would be a new experience for her. (ie politics only show.) And GSOH.

I agree with the calls to bring back Jenny Scott - the program hasn't been the same since she left.

If Jenny Scott can't be persuaded to come back, I'd go for Riz LaTif.

Her name is Jo Coburn, not Cockburn, has she upset you in some way I don't know about?!

Shelagh Fogarty might have stepped up to the plate once in the past but she has been indelibly tainted by the frippery of Campbell. When he comes on in the morning I always turn over to R4.

Gillian Joseph: very presentable, intelligent, polite, good sense of humour, balanced, not full of herself (like Anand), and black.
Ticks all the boxes for Brillo.

Desperate Dan, you forgot to mention the noisy outside broadcast from a trendy wine bar (in fact, it's now obligatory for election programmes).

Am I really the only one to be annoyed every time some (female) public figure gets pregnant and the report never mentions who the father is? Why this un-personing of half the population? Michael Buerk was spot-on about this.

you don't believe in families or family support.
Why do you want to see the abolition of universal child care benefits and EMA?

What's with all this totty nonsense for Andrew Neil? Why does he deserve any eye candy, I mean just look at him.

He looks as though he's been gulping pints of beer, which has puffed up his face...and has he just woken up from a two year sleep!

So, here are my two suggestions - and he can like it or lump it. Lump being the operative word.

No-one, but no-one can replace the very crunchy Anita Anand, who most certainly has the loveliest voice in radio...

Victoria Derbyshire is getting some stick on here, but she shouldn't get the nod because all we would hear on the DPs would be the noisy pounding of her keyboard off-screen, as happens on her show... :(