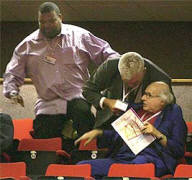 It seems that the control freak tendency within the Labour Party is still alive and kicking. So damaged was Labour by the expulsion of Walter Wolfgang from their conference two years ago that they have determined never to let it happen again. After several expulsions last year (see HERE), Party staff have been instructed to draw up a blacklist of all the potential future Walter Wolfgangs and have banned them from the Conference. Several younger members have already had their application forms sent back despite not having any kind of criminal record. Last year a woman of 70 had her pass taken away. Despite writing to various Labour MPs to protest, it never got in the papers.

What a shame it is that they cannot ban the real Walter Wolfgang. He is, you will recall, now an elected member of the Labour Party National Executive Committee. Who said there is no justice in the world?
Posted by Iain Dale at 11:18 am

Good to see that picture again! But I seem to recall similar scenes from Thatcher-rallies (putting Nuremburg to shame!) which were very little commented on at the time by the media - perhaps it was just expected of the Tories, whereas Labour are held to a higher standard?

Who does the Labour Party belong to? A cabal in Downing Street or its members?

If the Labour Party drew up a list of Wolfgangs to ban, there wouldn't be anybody at the Conference.

Of course he is on the NEC. The "grassroots" members like to elect head-bangers, it makes them feel they matter and it also helps the party on its journey to opposition, which is where most of its members wish it was

Anon "Who does the Labour Party belong to". Good question. We know it is now despised by many of its natural supporters. We know that the cabinet almost without exception is reviled by most of the electorate.
NuLab is not a political party. It was a vehicle to get Blair Straw Brown and co decent jobs, good pensions and trappings. Post Blair the 'Party' will implode and then we will see who owns the new Labour Party.

Sounds like a few in the Tory party I know. We have been in opposition so long, we have got comfortable with it so much, we prefer it to actually haveing to govern!

anonymous,
I'm only guessing but I think those chucked out of Thatcher-rallies were not actually meant to be there. Unlike Wolfgang I think they were interlopers, he is a member of the party and was an accredited delegate, they would have been leftist trespassers. You aren't comparing like with like.

What a bunch of ****ers and control freaks they are.

With a bit of luck we can get rid of them at the next election.

I'm less concerned with the control freakery and ejecting people from conferences; what's more troubling is that the police used terrorism legislation to ban him from re-entering. Outrageous!

Anybody who does get in should start a slow handclap during Tony's speech. Pass it on.

Tut tut Iain, I thought you could do better than this.

Labour are banning men from standing as MP.

How sick is that?

You might read about some upset on the blogs and in the Guardian's Comment is Free (aka Talk is Cheap) site but when Tony stands up to make his speech, they'll be swooning in the aisles and turbo-clapping the bouffant leader as usual.

It is increasingly becoming clear that for all parties it is a great inconvenience to have members. A few million from a bevy of millionaires, a good ad agency, a photogenic leader, Rupert Murdoch's goodwill is fine. No members, no policies - they only cause trouble.

Also nobody caring enough to vote.

Our masters would stop at nothing to silence dissent. The only need success, not moral or political legitimacy.

Agree with Jane and others that a fair number of NuLab MPs and activists are longing for Opposition, where they can indulge in enjoyable debates about socialism and other lost causes.

Tone, in the meantime, will, like his doppleganger, Alfred E Neuman, grin endlessly and tell us: "What, me worry?" And why shouldn't he? He'll be rich and will be doing a wonderful job on the international stage. And he'll be chuckling over the latest polls as Brown struggles to keep the party together.

Compare this to Francis Maude offering an invite to Guido and other bloggers to come to conference and even giving them a bit of a platform with 'bloggers corner'.

Am I the only one who thinks that Wolfgang is an irritating little, leftie tosser who got what he deserved? Come on Iain, stop glorifying him just because he caused NuLab a bit of bother.

Is John Prescott going to be the bouncer this time round- he is well experienced at that and it is the only thing he is good at- Labour should not waste his talent.

This Wolfgang chap should be thanking Labour for chucking him out.

Hes on the National Council, done a few tv appearances and been on a few speaking tours all because he was punted out of their conference. jade Goody did more to get famous

As I said in connection with so called leadership resolution, the conference is a stitch-up. None of the dissenters bother to go any more and clearly now we find that those who want to have been neutralised.

It will be interesting to watch; a party in free-fall, decadent and moribund, dependent on one last turn of the spin-ometer to make guilty-sweaty Tony look good.

Cherie will kiss Tony. Tony will sing whatever it is they sing nowadays and Nick Robinson will pretend he is doing a cutting edge interview. The Police will arrest anyone who looks Old Labour, under the terrorism act, and John Prescott's well-rehearsed self-deprecatory joke will fall as flat as a baked bean fart in outer space.

I shall be glued to the TV