Invitation to Form TORIES FOR MEACHER 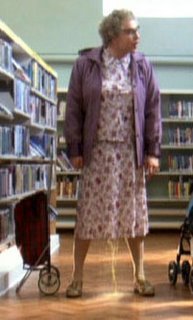 Following my piece last week on Michael Meacher seeking to stand against Gordon Brown for the Labour leadership (see HERE), The Daily alerts me to the existence of a Michael Meacher blog. Please contain your excitement. It's titled MICHAEL MEACHER - LABOUR'S FUTURE. No, really, it is. Laugh, I nearly did what the lady in Little Britain does.

I have just heard, from what I regard as an unimpeachable source that Gordon Brown has told junior ministers that if they do not vote for him in the forthcoming leadership contest, they’ll be out. I must say, the machine politics doesn’t surprise me. But clearly Gordon is more worried about his vote than we thought!

Well blow me down. I feel another incontinence attack coming on. I think I can see huge advantages to the Conservatives if Michael Meacher carries on his campaign. Anyone likes to form Tories for Meacher?
Posted by Iain Dale at 10:39 am

You couldn't it up...but it is grand to see Labour imploding in OTHER directions too!

Tempting, but I think there is one candidate who can do Labour more damage Iain,that iswhy I have joined Tories for Gordon!

The Economist this week joins speculation that Gordon Brown is in touch with Ming about conceding PR as part of an electoral pact. He also is quoted as talking of politicl parties becoming 'obsolete' in his interview with Andrew Marr.

As usual Gordon Brown moves by stealth, coupled with threats and demands. If he becomes PM, it really will be time to emigrate. What the hell's he up to.

I agree about emigrating if Gordon Brown becomes PM. The man is creepy ! Ed Balls, Red Dawn Primarolo, Douglas ALexander etc seem to belong to some Agnus Dei like sect devoted to the charmless chancellor. He's surrounded himself with supplicants of questionable character whose only distinction seem to be extreme servility to him , even above the interests of their own party.

Tories for Brown I say. A twitchy Nixon versus a fluent, easy on the eye David Cameron. No contest. I really believe Mr. Cameron would wipe the floor with the leaden and loopy Chancellor.

Average guy on the street said...

I'm with the Tories for Brown crowd. His biggest advantage is that he is Scottish - don't forget that England makes up approximately 80% of the UK and I am sure that most of us do not want a Scottish PM when we have the West Lothian Question. Though anyone who gives Labour a one-way ticket to opposition will get my vote.

Yes... The Daily wasn't first with this news, Iain, I think you've spent too much time watching the golf.

I'm not sure about this or the Serf's Tories for Brown campaign. I think it might be more productive to run a "Michael Meacher: a threat to our baby eating ambitions" series all over the right wing blogosphere. Otherwise we'll give the game away :0

Ming is madd but not madd enough to get into bed with Gordon Brown in anyway whatsoever.

Not after the Labour Party had just lost power after 11 or so years. The British public would never forgive the Lib/Dems for prolonging their agony.

Certainly not after Gordons had a few drinks either.

The British peoples liberal nature will forgive Ming for his lack of real conviction or taste. But only because they believe Ming would have suffered prolonged agony, and has much more to come.