Cherie Does it Again... 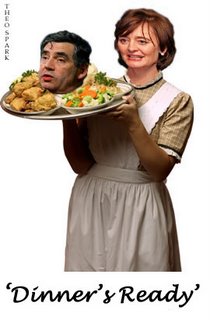 It was claimed that while Mr Brown was on his feet yesterday, Mrs Blair walked past the Communication Workers' Union stall and said with a wave of her arm: "This is all rubbish."
She was then said to have turned to two people near the stall and said: "Anyway, you lot should be supporting Alan Johnson". Mr Johnson, the Education Secretary, is being urged to stand against the Chancellor for the Labour leadership when Mr Blair stands down. The incident is alleged to have happened while Mrs Blair was walking through the conference exhibition hall only moments before she allegedly commented "well, that's a lie" on hearing Mr Brown on a TV monitor say he felt privileged to have worked with her husband. Downing Street deny both allegations and insist that Mrs Blair listened to the speech in a side room. A spokesman said of the alleged remarks: "This is clearly not true."

Hattip for graphic to Theo Spark.
Posted by Iain Dale at 12:49 pm

Maybe its her that has gone insane not Tony , lets face it we all do what "er indoors" tells us to.
(some boys are excused this , yes you Dale, you at the back reading that book about william Pitt)
Many of those that have had the misfortune to meet the Blairs have said that she is the one with the brains and therefore the power.

As Andrew Rawnsley's book revealed a few years ago Gordon Brown describes Gordon Brown as a liar, so in a sense Cherie is actually being rather supportive.

The thought of Cherie "giving head"...

qtewaNo, really she does! And so does her father, and her mother-in-law. And her husband too!

They are just one BIG happy family, and anything the medja says to the contrary is just rubbish!

But it would be good if we could the Union to stand this story up!

The Communication Workers' Union just said Cherie Blair wasn't even at that stand during the Brown's speech.

Cherie is neither her dad nor her husband. She's been great for gurning though..

Where's the apple?
Get something in his mouth for god'ssake - in case any more incomprehensible long words like 'endogenous' spill out.

I'm not sure Theo deserves a hat-tip for that picture. The thought of Cherie dancing the 7 veils is just too awful to contemplate. In any case, if GB is John the Baptist to Blair's Jesus, haven't they got it rather arse about face?

In a further embarrassment for Number 10, its infamous spin operation is today revealed as past its best. When blogger Iain Dale posted a second story about Cherie's obvious if unconsummated love for the Chancellor, Blair's ragbag of shysters could only manage to post an anonymous denial of the story at 1.41pm – a full two minutes after someone else had danced on the grave of ZaNu Labour.

She forgot to roll up a copy of his last budget and stick it in his mouth.

The nation will be grateful to Mrs B one day for doing her bit to keep the miserable sod out of No 10. Hope it works...

She looks wholly appropriate in her uniform though, regardless of what she's got on her tray.

Love the picture.Nice one. Not sure being disliked by Cherie Blair is an electoral drawback though. I `ve got a sort of kinky thing about her myself.

I `m thinking a Cherie Blair Ruth Kelly sandwich in which I am the meat . Those Catholic girls are filthy

Old news Iain. Blair's already made the joke about her not jumping into the sack with thye dark, brooding Heathcliff fellow next door.

Interestingly as well, the BBC Perception Panel showed two really big showings on the speech approval front. One was when he made light of his missus's dislike of the next PM, and a really big, big approval for when he laid into his Blair-lite Tory doppelganger.

{The Communication Workers' Union just said Cherie Blair wasn't even at that stand during the Brown's speech.}

Is that the union postmen belong to, if so maybe they had a letter box as part of the stand, that would explain the confusion.

Do you really think this was a deliberate plan? Everything she touches turns to dross, so my feeling is that if this had been a deliberate plan to squash Brown she would have somehow found a way to screw it up.

My money is that it was spontaneous, because if it had been anything else, she would have managed to botch it.

To cap it all. They (no 10) had to get Alastair Campbell out of the closet to deny it. BBC & c4 news are paying good money for that toe rag!! Anyone believe him 0r the scouse gits daughter.

This story is right up there with Elspeth Howe doesn't like Thatcher.God bless 24 hour news media :)

Has the Blair witch made Gordon Brown her pet project?

Peter Hitchens thinks cher is the one with the brains. Well, I think she has more brains than Tone, but that's not saying much. Tony Blair is a dunderheid. Thick, thick, thick; no intellectual curiosity whatsoever. No interest in the history of the country he is governing (with such malevolent effect) nor in his predecessors.

Therefore, it doesn't take much to be smarter than Tony, and I don't think Her Cherieness is very clever. About average, but a swot and driven by chippiness. But I don't think she's any great brain. And Blair is a dolt driven by a love of praise and applause.

I spy strangers - I think you have the wrong reference. In this picture, I think Cherie is supposed to be a suburban housewife. Her over gloves give you the clue.

Anon 1.41. This is the same popstmans union who said that wouldn't lose my passport and marriage certificate when I sent it recorded delivery I presume?

I always thought Salome was meant to be a bit of a looker (more Tracey from Rochdale than Hilda Ogden, if you get my drift).

Obviously I was wrong and shall have to revise my opinions re the great strumpets of history.