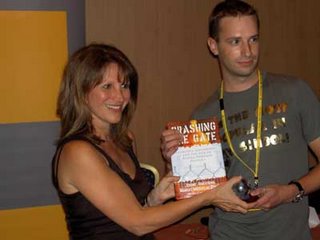 Just got back home fromt the LibDem Blogger of the Year awards at their conference, which was won by the very charming Stephen Tall, who writes the Oxford Liberal Blog. He's pictured here receving the award from the LibDem BlogBabe Lynne Featherstone. I am slightly embarrassed that I only ranked it Number 17 in my list, because having had another look at it now, it does deserve to be higher. Still a grotesque blogger template though! The fringe meeting was very well attended and it was good to put faces to names. Did interviews with several journalists there who found it difficult to comprehend that people of different political opionions could actually be friendly to each other. They still don't get this blogging community thingy, do they?

Stephen and I did an interview for the Today programme which will be broadcast in a few hours time. I then interviewed him, Alex Foster and Rob Fenwick for my Channel 4 News Morning Reports Podcast, which you will also be able to hear from 8am. I'll add the link later.

We shifted a couple of hundred copies of the Guide to Blogging and was even asked to autograph a copy! I admit I nearly fell off my chair when a Birmingham LibDem told me she reads my blog every day and finds it very educational. And she was being serious. Anyway, thanks to everyone at the meeting who made me feel welcome. It was a good event, and well done to those who put it on. And that's the last nice thing I shall say about the LibDems this week. I think.

UPDATE: You can hear a 5 minute interview on the Today Programme with Stephen Tall any myself by clicking on the 6.30-7am section HERE.
Posted by Iain Dale at 1:00 am

I think blogging is like Rugby. We can fight like rats in a sack over the game, but withing rules, but must be civil and friendly in the bar afterwards!

Before I've even read a newspaper I get online in the morning check my emails and RSS feeds for new posts to the various blogs I enjoy, this being chief among them. It's a great way to deliver a message.

Why is she holding his balls? If word gets out the LibDems are this friendly, membership could triple!

"a Birmingham LibDem told me she reads my bog every day"

That is a most unfortunate typo. Is this a new form of fortune telling?

The B'ham LD person was quite drunk, we don't let her out that often!!

Iain, I look forward to meeting you in person one day ;o)

Glad to see that Stephen Tall is blogging for the Lib Dems in Oxford but isnt he meant to be emplpoyed as a Development Officer for St Anne's Oxford. As a graduate of St Anne's College I thought he would spend his freetime ensuring that my old college gets the best returns on its small endowments rather than peddle Lib Dem flim-flam! tsh tsh.