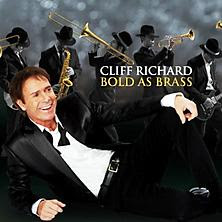 Going to see one of your musical heroes in concert is an experience always fraught with danger. Why? Because frankly, few people in the audience are ever interested in hearing new songs – all they want to hear are the big hits. And so when I went to see Sir Cliff Richard’s 70th birthday concert at the Royal Albert Hall on Wednesday, it was with a feeling of some trepidation. The concert was titled ‘Bold as Brass’ and we knew in advance that Cliff would be accompanied by the big band sound of the Orchestra de Ville.

It really was a concert of two halves – the first replete with some of Cliff’s more well known hits like Devil Woman and The Day I Met Marie. Each song had a very different arrangement to the original, with All my Love and the Twelfth of Never being particular highlights. But the piece de resistance was, as usual, Miss You Nights, which remains my favourite song of all time by any artist. When this was released as a single back in 1975 it struggled to get to number 15 in the charts, yet no Cliff concert would be complete without it. It’s one of those ballads that make the hairs on the back of your neck stand up.

Well, so far, so good. We all enjoyed the first half. Sadly the same could not be said for the second which consisted entirely of big band renditions of songs totally unfamiliar to the audience. In fact, Cliff sang every single song on his new Bold as Brass album, and frankly I didn’t really enjoy one of them. Judging by the tepid applause from the rest of the audience, nor did they. My partner described his rendition of a couple of Cole Porter numbers as “murdering” them. It was Harry Connick Junior mixed in with Frank Sinatra – or at least it was supposed to be.

The trouble is, Cliff’s voice isn’t suited to this kind of music. It’s too mellow. It hasn’t got an edge. Don’t get me wrong, even at 70 he can still belt them out and his voice certainly hasn’t deteriorated with age, but he’s just not suited to this type of music. The only saving grace was that right at the end he gave us We Don’t Talk Anymore. Everyone loved it, but the fact that there was no encore told its own story. The audience upped and left as soon as We Don’t Talk Anymore was over.

And I was left thinking that it was very odd to go to a Cliff Richard concert when he didn’t even sing Move It or Living Doll.

* This first appeared in my EDP column this morning.
Posted by Iain Dale at 1:26 pm

This reminds me of a Donovan concert we went to a few years ago in Bristol - not least because one of my sons was playing keyboards in his band for that particular tour. During the first half, he sang his well-known hits from the 1960s, every one of which was greeted by bursts of applause that lasted 15-25 seconds (i.e. way above the standard 8±1 seconds norm).

The second half he devoted to numbers from his latest album, which was, of course, the reason for the tour. The applause for every of these fell within the 8±1 second range - i.e. the standard amount: polite, adequate but far from enthusiastic. Given that the average age of the audience was about the same age as Donovan, we came away wondering why he was bothering to try to flog us his new stuff when all we wanted to hear (apart from my son's outstanding keyboard playing) were the songs we knew and remembered...

"I was left thinking that it was very odd to go to a Cliff Richard concert..."

You could just have left it there ?

Iain, I am a fan of your blog and LBC show. But Cliff Richard!!?! Cliff spent forty years proving that he has no idea how to sing rock n roll and now he is proving that he has even less idea how to project the great standards. What you should do is spend an hour with Jerry Lee and Ray Charles, and then switch to Peggy Lee and Sarah Vaughan. Your love of Cliff will soon evaporate, that I can guarantee. "Miss You Nights"? I'm sorry but I have to be a bit crude here. Just by passing wind, Cole Porter wrote a better song than that dross.
Still keep up the good work!

Went to see a couple of punk/new wave bands recently - Stiff Little Fingers and the Buzzcocks - and almost all of their stuff was from1980 or thereabouts.

They know that's what people come to see - and they don't attract huge crowds - so they don't try to push their newer stuff.

The moving finger has moved on.

I find Cliff very boring and MOR but I am always surprised at the depth of his fanbase. He must have a secret appeal that I just don't get.

I posted on your previous on this and said I only like very early stuff like "Move It and Living Doll"!
Quel surpris!
Goodnight Cliff; you've had a good innings so don't do a "Brucie" - you've got your "K".

Like you I've been a huge Cliff fan for years, but came away from this concert feeling let down. To me he was just being self-indulgent and seriously mis-judged what his audience wanted(although initial sales of the new album suggest otherwise), and I for one will think twice in future about paying good money to see such a mediocre Cliff concert. Don't get me wrong, he can still rock and roll with the best of them, but for some reason he chose not to deliver this time. Sadly, I fear that my lifelong love affair with Cliff is coming to an end.

Just had another thought about this, which is that Cliff could learn from the Wurzels. A few years ago, I hired them to play at a concert in our village. They informed me they'd play for 45 minutes and then do a 15 minute 'encore'. The really big hits (e.g. 'Combine Harvester') were deferred to the 'encore' - the demand for which was no doubt 100% assured by the fact that they hadn't yet sung their best known numbers!