A Visit to Number Ten 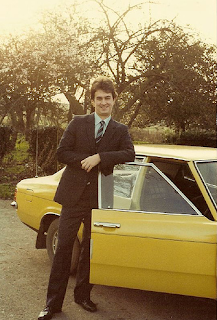 Tonight I am going to a reception at Number Ten. It will be the first time I will have been there to a social event since I was a mere political stripling at the age of 20, in January 1983. And that was quite a memorable evening.

Margaret Thatcher had invited all the different chairmen of university Conservative associations. I had only formed mine at UEA a few months earlier and wasn't really 'in' with the FCS crowd, so I turned up at the St Stephen's Tavern in Parliament Square with some trepidation. I had driven down to London in my yellow Ford Cortina Mark III and my three piece pin stripe blue suit (pic!), bought specially for the occasion.

I remember arriving terribly early and wondering how to pass an hour talking to people I didn't know. Believe it or not, I could be painfully shy in those days, and believe it or not, I still can be! Anyway, the hour came and we wandered down to Number 10 - no security gates in those days. My first recollection is of climbing the famous staircase with the pictures of former PMs. And there at the top was the Prime Minister and Denis. "My God, she's tiny," I remember thinking. She had clearly developed a well practised routine with visitors. When she shook my hand she almost imperceptibly moved me off to the left into the reception room.

Most of the Cabinet was there, including the party chairman Cecil Parkinson who at one point offered me a pair of running shoes. Apparently he had given an interview in which he spoke of his habit of going for an early morning run and was then inundated with free trainers. Sadly he was a 9 and I am a size 11.

I also remember speaking to my own MP, Alan Haselhurst, and while we were speaking Mrs T came into our part of the room, took off her stilletoed shoe and banged it on the floor to get attention. The division bell had just rung, so she barked out "Would all Conservative MPs kindly go and vote, while the rest of us stay here and enjoy ourselves?!" And with that, they did their duty.

My other recollection of the evening is not so happy. I have a very low propensity to alcohol - indeed, nowadays I don't drink at all - and after two or three glasses of wine I would be three sheets to the wind. Anyway, the Downing Street waiters were extremely proficient and kept plying us with drink. After two glasses of white wine I decided to stop, but you know what it's like at receptions, you feel a bit of a prat without a glass in your hand, so I took another. Just as it reached my lips, I saw Margaret Thatcher approaching. But as I took a sip, and as she walked right past me, I started heaving. It wasn't white wine, it was whisky and water. I honestly thought I was going to be sick at the Prime Minister's feet. Luckily, I managed to keep it down, but it was a close run thing! Imagine it, being sick on the very stiletto she had just used to bang the floor!

Anyway, I am greatly looking forward to seeing how the building has changed in the intervening 27 years.
Posted by Iain Dale at 9:43 am

Well, you know what you've got to do Iain.

Have a bloody good time and then report back to us.

Have a great time you lucky thing!

I think that picture is possibly the bravest thing I've ever seen.

ie. the same pose; a pic of you suited and booted standing next to your Ford Focus (or whatever mode of transport you are taking tonight)!

10 Downing Street used to be full of great paintings by British artists, Reynolds, Turner and so on. Blair had them all taken away and replaced with trendy modern rubbish. Then Brown, who boasted that he never looked at pictures, put up his children's daubs (you can see what it looked like here: http://www.guardian.co.uk/politics/gallery/2010/may/12/gordon-brown-labourleadership?picture=362535527). If you meet Cameron, can you ask him to put the proper pictures back?

What a delightful story!

Wow! What a fine head of hair you had in those days Iain.
I always thought that it was only a myth that Lady Thatcher was so bossy...apparently not!
If you speak to David Cameron please give him my good wishes.
I met and spoke to him once at reception in the Liverpool Museum.
he was most engaging and very interested in the future of this great City.
Have a wonderful evening,

Why can't us University associations have something like that now?

You'll do well in the next series of Life on Mars....

I think this picture of you is much, much better myself. Deserves a wider audience...

Patrick said "Can we see the 2010 version of this? ie, the same pose; a pic of you suited and booted standing next to your Ford Focus (or whatever mode of transport you are taking tonight..."

It wouldn't surprise me if Total Politics magazine provide Iain with his own fleet of luxury cars to choose from. ;-)

The completely inexplicable fawning reverence that some impressionable Tories have for that all-time national disaster Margaret Thatcher must be psycho-sexual.

There is no greater faux pas than pinching your hostess's own drink.

Check the cupboard under the stairs. Rumour has it that it's now the constituency office of the MP for Kirkaldy and Cowdenbeath.

"she almost imperceptibly moved me off to the left"

She had that effect on a lot of us.

Wanting to throw up after just a sip of Whisky? What are you some sort of big wuss?
Ahem, sorry.

Well I hope you get all wired up so we can listen in when you next do a 7dayshow with Jonathan Sheppard. If you don't you will have some serious explaining to do then! :-)

And, oh yes, please could you explain in the nicest possible way to George or Vince if they happen to be around, to keep their mits off our capital gains. It has already been taxed once I have you know. At the very least allow for the eroding effects of inflation.

Have a nice time Iain. For anyone that missed today's political midday event:

Get your Guido's PMQs funnies here

@Simon Gardner - this piece of Iain's is interesting, charming and personal but you can only respond with your irrelevant dogmatic drivel. What a churlish bore you are!

You've still got just as much hair now and look just as slim.;-)

Look on the bright side old chap..at least you wont be seen on London in a yellow Cortina this time!!!!

I liked the picture Iain. Hot.

I always wanted a yellow car.

I hope you do not bear any animosity towards the friend who lent you that strangely coloured vehicle you used to travel to your exciting visit to No 10.A sure start to a meteoric multi faceted career.

@Simon Gardner: Surely there is something more psycho-sexual about a person with a man's name commenting online using a woman's portrait?

@AGilinsky: Good question. We'll have to wait and see.

unless i missed it, i notice iain didnt mention WHY he was invited for drinky poo's at No10

and as for his first visit in umpteen years - i am afraid i have never been to number 10 - and i suspect am never likely to go either.

but then invitations for drinky poo's at number 10 don't go out to the great unwashed like myself - our job is to pay our taxes and keep our mouths shut.

i really must join some special interest group one day then i expect my invitation will be sent instantly !

There was an edition of Qhestion Time way back when an elderly gent in the audience protested at negative comments about Margaret Thatcher. "She should not be mocked" he said, "she should be veneered".

Good post. Tell Dave he's doing a great job so far, circumstances permitting, and remind him to remain on the straight and narrow.

Downing St Planning Department
Keeping the coalition together is the aim. I know, let's invite that Iain Dale. He's good at straddling our differences. Sick bucket kept handy, of course. Don't be too liberal with the whiskey.

Iain - is that the reception for Gay supporters? If so why didn't you mention it?

Seems a little strange considering no one on this site cares about your sexuality only that youre happy with your partner.

That all rings bells but my introduction to No 10 was be4 Margaret - in Ted's time - the booze flowed even better then!