There was a time, in the late seventies and early eighties, when I would go to Wimbledon every year, but my interest in tennis waned in the 1990s as the main players just resorted to bashing the ball from base line to base line. Seeing a player come to the net was as rare as a British tennis victory. Today I am going to Wimbledon for the first time in at least fifteen years.

Strangely, in World Cup week my interest in tennis has been reawakened after Wimbledon has been hit by the same disease of ‘underdogitis’ which has affected the World Cup. Even the sainted Roger Federer came as close as you can get to losing in the first round. And then there was the match which ended 70-68 in the final set. This match has been lauded as the greatest in modern tennis history, and a tribute to the fitness of the two players. The latter is certainly true, but in some ways is displayed all that is wrong with modern tennis. During the match a record 212 aces were served. Aces certainly have their place in the game, but most people go to tennis matches to see exciting rallies, rather than ace after boring ace.

I used to be able to name all the top players. I would have at least heard of most of the Top 100 players in the world. I marvelled at the skills of the likes of Jimmy Connors, McEnroe, Lendl and Nastase. But today I couldn’t name more than the top five players in the world. And apart from the Williams sisters, the leading womens’ players are a mystery to me. But then womens’ tennis always has been the Vauxhall Conference of tennis – slow, plodding and full of grunting. There have been some great women players in the game - Chris Evert, Billie Jean King, Martina Navratilova and Steffi Graf, but be honest - apart from Venus and Serena Williams, there are very few who you would pay good money to go and see.

To be honest, the thing I am most looking forward to today is meeting up with my old German lecturer from my university days, Gordon Turner. In March 2009 I wrote this...
Yesterday I went to see my old lecturer from UEA, Gordon Turner, who I hadn't seen for many years. He was one of those people in my life who went the extra mile to help me. One of those special people who enhance every life they touch. I wondered if he had changed, but I needn't have worried. It was as if there hadn't been two intervening decades since I graduated.
We're meeting up with another university friend, Chris Bowers, who is a tennis journalist and this year stood as a LibDem candidate in the general election. Chris and I both had parts in two German musicals which Gordon Turner produced and directed. One of them was Brecht's 'Die Dreigroschenoper' in which I played one of Mack the Knife's henchmen. I'm the one in yellow in this picture!... 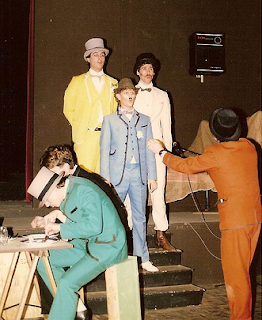 Seems you want it both ways.

You don't like the men's aces but decry the women's slower play. I used to prefer the women's play especially when Steffi was the world number 1. The comparative rarity of aces meant there had to be more skill. Today Justine Henin is a pleasure to watch.

If you really want to see more skill in the men's game, then Wimbledon (and others) will need to make a slightly softer ball so that there is less raw speed.

Iain, can that really be you? Like a good wine, you have definitely improved with age :-)

There are very few female tennis players YOU would pay to see, Iain. And as we've said many times before, we're all cool with that.

I wouldn't pay to see the Williams sisters. They have no grace and no manners.

An American in Exile said...

I agree with you about "ace after boring ace" being "all that is wrong with modern tennis." However, that's exactly the reason I prefer watching women's tennis. We'll have to wait and see what the rest of Wimbledon brings, but there were some terrific women's matches at Roland Garros, e.g. Stosur/Serena, Stosur/Henin. And while Samantha Stosur underperformed in the final, it was still a very enjoyable match, with some brilliant shot-making from Francesca Schiavone.

Based on both players' form coming into Wimbledon, I think the opening match on Centre Court today between Justine Henin and Nadia Petrova has the potential to be highly competitive. If so, I hope you get to see it!

Can only agree with you about Women's Tennis Iain. What really baffles me in this age of equality and equal pay for equal work is why the Women get paid the same for 3 set matches as the Men do for 5 set matches. Equality, it would seem, means something else in this case.

Who was the greatest tennis player of all time? Rod Laver, Pistol Pete Sampras, Borg, MacEnroe, Nadal or Federer?

Maybe none of these, or possibly MacEnroe.

Why? Because simply, singles is a much easier game to play than doubles.

Singles is a game of skill sure enough, but also of power and physical fitness. Often the more skilful player will lose to the more physically strong.

Doubles requires more variety of shots and far more strategy, the ability to read the situation, your opponents' plans and vary your own tactical play. It is also, in my opinion, the better spectator sport.

Most people don't watch doubles because they don't understand it, while singles is understandable by anyone capable of enjoying a penalty shoot-out in football.

If MacEnroe wasn't the all-time greatest, then it was probably another player who most people will not even have heard of. He won Wimbledon Men's Doubles ten years in succession. He could play perfect shots of infinite variety over and over, decimating all opponents from all corners of the earth.

I am talking about the Sydney lad, Tod Woodbridge.

If you want tennis to be interesting, turn off your TV, go to the outside courts at Wimbledon which the mob walk past, and have a best seat at the best doubles tennis in the world for the price of an ordinary walk-in ticket.

I'm sorry, normally I think you talk a lot of sense but saying that tennis has somehow got more boring in the last few years is plain wrong.

In the early 90s I agree that the balance tipped slightly too far in favour of big serves, but the LTA have done a lot in recent years to bring that quality back - slowing down the courts etc.

I defy you to watch the Federer v Nadal match from Wimbledon 2008 final and then come back and tell me tennis is boring/too many aces etc. There are plenty of highlight clips on YouTube to choose from.

Wanting fewer aces but more net play is problematic - serve and volley technique works best on a fast surface like grass or some of the hard courts - but the fast surface leads to faster service, and hence more aces.

I might be slightly biased, being born and brought up in Wimbledon, but I'd far rather watch a match consisting of exciting (if very short) serve and volleying style points that the tedious slugfest that is clay court tennis.

Isner and Mahut was slightly self-perpetuating anyway - neither looked all that great at returning at the best of times, and once they became tired, they started to save their energy for their own service games. This carried on a while...

The Men's has actually been pretty exciting so far this year, with that thrilling Federer/Falla close-fought match, lots of thrills in Nadal's game and so on. I think next week's play should be equally rewarding.

It's true though that the boredom level has increased a little - Federer for example, whilst undeniably brilliant technically, has tended to win on a lot of aces and similar strokes. Same with the Williams sisters.

I suspect that what has happened is similar to other major international sports like fifa football and the olympics - the import of big money and big commercial risks into sport has led to a play-it-safe attitude amongst the top professionals. Even a small injury for example can lead to millions in potential earnings being lost. Against that background, you can see why they practise those slogging aces!

Amateur sports are often more interesting - how refreshing it is to watch the less showbiz teams play in the world cup for example.