Has Diane Abbott Appeared On THIS WEEK For the Last Time? 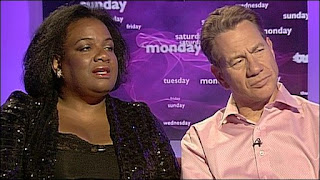 Last night I caught up with the latest THIS WEEK programme in which Diane Abbott more or less resigned from the programme. Well, perhaps it is more accurate to say that Andrew Neil 'resigned' her. I just can't really see how she can return to the THIS WEEK sofa after the Labour leadership contest is over. Stranger things have happened, but we'll see.

So if Diane leaves, who would replace her? In recent weeks Caroline Flint and Hazel Blears have deputised. I thought Flint was especially good and could be a long term replacement if she doesn't want to go back on the Labour front bench in the autumn.

All this will also raise the question of Michael Portillo's future on the sofa too. The basic trouble with Abbott and Portillo is that nowadays, neither are particularly in touch with the parties from which they come. You can see from Abbott's leadership campaign that she lives in about 1984, and Portillo hasn't really quite got to grips with the new Tory Party.

That's not to say I would advocate replacing Portillo. I wouldn't, because he is often entertaining and brings some much needed gravitas to the THIS WEEK sofa.

So who would you like to see sit alongside Portillo in the future?
Posted by Iain Dale at 12:54 pm

Oona King was good and if she doesn't get the Mayoral nomination she may be an interesting regular. And given the way Portillo was looking at her it would create some interesting chemistry.

I only found out the other day that Portillo is no longer a member of the Tory Party.

What is the reason for her entering the leadership race? Never been a minister, not asked? or not wanted the job? Either way why go for what is possible the PM job?

Maybe her motives are for when she leaves Parl at the next GE to go to some cusy director(s) jobs? Her plan seems to have come apart at the first hurdle, not very promising.

Not only should Abbot be replaced, but Portaloo as well. Perhaps, the BBC should also consider relacing Brillo "I Am Reading This Idiot Card Slowly" Neil?

Iain said in this post: "So if Diane leaves, who would replace her? I would like to remind the BBC that I am available for media appearances for a modest fee. My diary is especially empty on Thursday evenings, so a place on the This Week bench next to Portillo would be ideal for me. Please contact my agent who will sort out all the details."

Portillo is an ex MP and so one presumes is there so he can be objective whilst supporting his own party.
And he is coherent. And it leaves him free of the baggage that seemed to catch out Abbott.

The balance was always wrong because Abbott was a sitting MP and at the death was always sticking up for labour.

So it should be an ex MP. But the BBC seem obsessed with gender balance so it should be a woman. But that leaves a big (pardon the non intended pun) 'black' hole.

I think Abbot will still be there. But to be balanced it needs an ex and semi detached labour representative.

Preferably not another hypocrite.

Caroline flint has done well on getting the Labour message across, in a non threatening way. Much like Dianne does.
Does it have to be a woman? If not there are soon to be 3 other failed leadership contenders. At least they could chat to Portillo about where they all went wrong.

Goes against his socialist principles to sit in House of Lords - check.

Out of touch with Labour party - check.

Often lampooned in the press - check.

Big chip on his shoulder about 'class' - check.

She'll creep her way back in.

I wonder if there is some symbolism being portrayed by the BBC here: it would be in keeping with their general practice.

Thus, if Conservatives are symbolised by a white male regular, then perhaps Labour are always to be symbolised by an ethnic minority-origin female (apart from weeks of absence). That would indeed make Oona King an appropriate choice, and I'd expect her to handle it quite well.

Otherwise I'd stick with Caroline Flint, who knows the show and fits it well. I can't think of anyone else who would probably suit the format of this particular show anywhere near as well.

Jacqui (troughing) Smith - as long as she has to donate her appearance money to the Inland Revenue.

(Her presence should keep Labour out of Office for another 12 years at least).

MikeyP's got it right. We need Brown on the sofa for the indefinite future, squirming weekly under rapid fire questioning from Neil. "Why did you sell our gold! Why did you abolish the 10p tax! Why were you so totally inept!"

Tebbit and Prescott would be fun. :-)

as others have said - it should be an ex labour MP so they dont just trot out the party line.

and cant agree with jailhouselawyers comments - Andrew Neil is excellent. in fact he is the only political interviewer who will take politicians to task. love the way he pounced on 'st' vince cable.

A revolving seat for someone is is not (a) an MP (b) and ex-MP or (c) an office holder in a party.

That way we are more likely to get someone with a grasp on reality.

Also she's as fit as a butcher's dog. (thanks Rod).

oh dear - I am afraid if Flint were on the show - them I'm switching off.

It is difficult to make a suggestion as all socialists are advocates of a failed ideology and essentially talk nonsense.

I expect the beeb will want to keep the quota box ticked by having a female. I'd suggest someone of sufficient age and experence to (like Portillo) be relatively relaxed about going off message. A sense of humour would be nice too, which Caroline Flint was rather lacking. Blears is just too contrivedly bouncy and not yet fully deprogrammed from Nulabour.

I'd suggest Glenda. Or Kate Hoey.

Portillo made it clear some time ago that he was no longer a Conservative party member. So his value on the programme is perhaps as an independent right-of-centre commentator. To find an equivalent on the left you would have to consider - er......Tony Blair?

To replace Portillo, they should bring on Doug Carswell. He's an independent Conservative who's also relevant. For Labour, Gloria De Piero.

I think you are wrong. I think Portillo has been spot on.

I think demographics should be represented so I would go with Blears.

Of course it may be just a matter of ethnicity, rather than ability. But even if that is so, I wonder if This Week could possibly find someone who is slightly less patronising and stupid?

Hazel Blears and Ricky Ponting would be match made in heaven.

A tricky choice to replace Abbott, given the generally poor performance of the "Quota" women in the labour Party.

Personally I think people are reading too much into Brillo's grilling. He was simply doing to Diane what he'll be doing to the other leadership contenders over the next few weeks: putting awkward questions to them to see how they'll react. The segment in which he quizzed Diane only felt strange because we're used to the usual bonhommie between Portillo, Abbott and Neil. This will undoubtedly return once the leadership race is over, as will Diane.

The chemistry between Diane, Michael and Andrew is a great part of the show's success. Portillo is sufficiently removed from the Tory party to be able to offer an objective (often sensible) view. Likewise, Diane as an independent-minded Labour backbencher can do the same. The last thing we need is the likes of Flint or Blears spouting the official party line without thinking for themselves, thereby turning This Week into yet another boring "party-speak" program.

Not, please god, Blears. Whenever I have heard her on QT or any other programme she seems to make childish, sixth form type comments as if she should get a gold star just for trying. Grow up woman!

In terms of grammatically erroneous and convoluted statements, this one surely takes the biscuit: "neither are particularly in touch with the parties from which they come. "

Could you have tried "neither is particularly in touch with the his or her party"? Shorter, mor elegant:)

Oona King was originally billed to be sharing the sofa with Portillo when the programme idea was conceived, she would be the best choice to replace Abbott -she is far more in touch than most other politicians, and performs far better on TV than Dianne, who I almost feel sorry for on a weekly basis.

Kate Hoey is by far the most intelligent and interesting of the suggestions made; however, she is a woman of a certain age and we all know the BBC's record on older women. Flint, King and Abbott are all too giggly, and all too "My Labour Party right or wrong". Portillo may not be to everyone's taste but he is highly intelligent and, most of the time, impartially analytical. Hoey would bring the same intelligence, but with a more passionate spin.

I think Portillo should stay as he has plenty of experience and is a familiar face to many people. I wouldn't like to see Hazel Blears on that programme - she can be far too irritating. Oona King or Caroline Flint might be good, but I haven't really seen much of either of them recently.