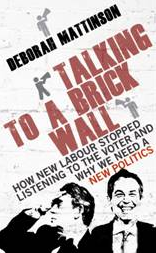 Deborah Mattinson was at the heart of Labour's polling organisation for many years. Indeed, she was Gordon Brown's personal pollster.

Today, the Sunday Times is serialising her book, TALKING TO A BRICK WALL, which my company, Biteback, is publishing next week. I'd love to send you a link to the feature online, but as you know, the Sunday Times now has a paywall.

The extract today centres on the election that never was in the autumn of 2007. Mattinson tells how Brown was indeed planning to hold a poll and describes the polling evidence that was used by his team to argue for it. She gives a revealing insight into the way Spencer Livermore, Brown's chief political adviser, was treated.

This is a not a kiss and tell book, although there are a lot of fascinating and very revealing anecdotes which tend to reinforce the conventional wisdom about the way Gordon Brown managed his government - if 'managed' is the right word. The book really does chart the rise and fall of New Labour through the eyes of a pollster.

The book is published tmorrow by Biteback in hardback, priced £17.99.

You can pre-order the book HERE.
Posted by Iain Dale at 12:03 pm

True, it could. But she was perfectly content to continue receiving the brick wall's exceedingly generous donations of our cash. Remember the Smith Institute?

I'm really not impressed by this woman. Seems to me she's been an integral part of, and complicit in, the NuLab butchery of this country - and now wishes to capitalise on her so-called inside knowledge. She, like Campbell, is just another example of the meretricious scum at the centre of government for the past thirteen years. No doubt many others will be only too glad to launch their 'insights' in return for hard cash. Have they not had enough of our money yet?

I hope you manage to make some sort of profit from this venture, Iain, but you'll not be receiving a contribution from me, I'm afraid.

I wish I could download it on my iPad?

I won't be buying anything that contributes to the income of a member/associate of the last Labour Government. They have collectively beggared the country. Until such time as all their profits are donated to the Inland Revenue to pay back the debt Labour has landed us with, they won't get a penny from me.

The pay wall is not up YET. You simply have to register onto the new sites.