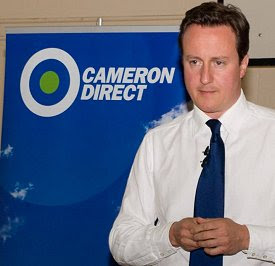 This was the 28th Cameron Direct event held around the country. Tonight it was Chatham & Aylesford's turn. People are understandably cynical about political meetings, but these evenings are different. There are no speeches, just an hour of David Cameron answering questions. It's truly unspun. The audience is made up of floating voters - you can tell they're not paid up Tory Party members by the absence of any questions about Europe. Cameron clearly enjoys himself, and he comes across well. One woman said to me afterwards that she liked the fact that he didn't indulge in 'politician speak' and spent very little time criticising others.

Another said she had voted LibDem at the last election but she knew they stood no chance in Chatham & Aylesford. "Cameron seems very normal and has a normal family." So has Nick Clegg, I said. "Yes," she said, "but he doesn't do it for me." Well, she certainly won't be number 31 by the sounds of it.

There is very little by the way of party politics during the hour. The questions are entirely unrehearsed and not put in in advance. There's no host, Cameron picks the questioners himself. They were on a wide range of subjects, many relating to the recession and society.

There were two areas I thought which could improve the evenings. Firstly, it would be better to have Cameron in amongst the audience - in the round maybe, rather than addressing from the front of a hall. And secondly, it took a little time for the audience to warm up. In the old days of the public meeting, the main speaker would always have a warm-up act. Not a comedian, but someone who could entertain the audience and get their political juices flowing. Perhaps I should volunteer... :)

Some may think that this is not a good use of a party leader's time. I disagree. As Cameron said in his introduction, most senior politicians when they visit a town have a pre-prescribed programme to follow. They arrive in a whirlwind, visit a factory or a hospital, do some local media interviews, do a local Tory fundraising event and are then whisked off back from whence they came. At least with these Cameron Direct events David Cameron is questioned by real people on issues which interest them. Each person attending will no doubt tell at least three others of their experience, and hopefully tell them how impressed they were. In marginal seats, reaching six hundred people makes these evenings very worthwhile.

There's also no attempt to promote the local candidate during the meeting. Tracey Crouch got a mention right at the end, but that was it. And that's probably right. It's Cameron who's the audience have come to see.

So all in all a very successful evening. In fact, more politicians ought to do this. There's a lot to be said for some good old fashioned public meetings.

AMUSING FOOTNOTE: Half way through the hour Cameron mentioned that there were four representatives from the UK Youth parliament present, as well as myself. He told the assembled throng that "Iain Dale is to blogging, what Johnnie Cash is to country music". I bellowed out: "Can't you do better than that?" He shrugged and laughed. So he likened me to a dead jailbird. He loves me really.
Posted by Iain Dale at 11:05 pm

Yes these events were a great idea of Nick Clegg's.

Except that Cameron was doing them before Clegg became LibDem leader...

Wow, that was such an incisive comment. Do come back with more.

*drags himself away from endless bickering on Guido Fawkes about how Iain Dale's blog apparently isn't as good as he used to be...*

There's something about the name Cameron Direct that I don't like. It sounds more like a courier company than a political event. Perhaps that's what he'll do once he's finished in politics, who knows?

Still, no matter. It's nice to see that Call Me Dave is prepared to meet normal people, unlike the Gorgon. From your report, it seems he actually answered the questions put to him - I'm impressed, actually. It's easy to bash the Tories for never putting forward alternatives, but he did a fair amount of that tonight. Well done.

And well done to a certain Mr Iain Dale for blogging about it. ;-)

Oh, one other comment - not strictly relevant to this thread, but there we go. What happened to the live political chat thing in the corner?

Did anyone actually use that? Anybody? Just curious.

Nice to see a leader of a Party going out and actually talking to people - I can't remember the last time Gordon Brown, Tony Blair, Nick Clegg, Charles Kennedy, Michael Howard, William Hague, John Major or Paddy Ashdown did that.

Well, Nick Clegg has done a couple but Cameron has been doing these for quite a while - good on him. It shows that he is not afraid of making his case with actual people, rather than simply giving press releases and dictating ala Labour.

I was very impressed by his policy points - I followed the video on the blog.

Sorry I missed it. Sounds like it went well. Many thanks Iain for blogging live on this...made up for not being able to get there.

And remember, Gordon Brown, won't let it happen on his watch!"

Clue for Mr Brown. It already has happened on your watch. Which is why people, real people, seem to be looking towards David Cameron.

What an odd comment to make re Johnny Cash who incidentally never received a jail sentence so could hardly be considered "a jail bird".

Does he mean you are some sort of maverick? Wear black? Are hotter than a pepper pot?

Maybe it was a reference to your penchant for reprobates, lowlifes and losers but I hardly think it's appropriate to bring your football team into it.

Bear, to be honest I could never make it work properly so gave up on it.

So let me get this right

200 old biddies from nowhere turned up at an old church in the middle of nowhere and muttered nice things about that nice young man from the Conservatives.

Perhaps it's the local candidate who should be the warm-up act.

OH, have you come out of retirement now?

Apparently I have to work until I drop (Supreme Leader, Gordon Brown, dikat 489281-b)

Not sure about debates in the round with the speaker/principal guest in the middle - the problem is that half the audience end up looking at the speaker's back. Perhaps instead of having rows of seats on the floor of the hall, it is better to have theatre-style seating.

As for warm up, yes, the candidate would make the ideal, um, candidate.

Johnny Cash - you should be proud!

Why do you keep perpetuating the idea that Nick Clegg slept with 30 women?

So this wasn't the first Cameron Direct? In June, last year.

The Man in Black, eh?

Still, Chatham is not quite as bad as Folsom - most days.

I think it is a very good use of politician's time not necessarily for the effect on the public but for the effect on the politician. Public speaking or even moreso speaking off the cuff to the public is a skill that can only be learned by doing it. If he can do this he will never dry before a camera. I think he should have had a warm up act for the same reason - it trains some local.

Iain - re Cameron's comparison of you to Johnny Cash...

You are, of course, both diabetic legends.

I understand that this was an Invitation only affair - how would you go about requesting an invitation ?

I am fairly sure that Nick Clegg did start with these, and he has also done far more than a couple.

But I suspect we will have to agree to disagree on that given our own obvious biases.