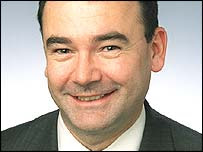 There's a very revealing interview in today's Independent with Jon Cruddas. He's fairly critical of Gordon Brown's reaction to the economic crisis throughout the interview and keep's saying that David Cameron is doing well. To his credit he does give some suggestions as to what Brown should now do.

Two things strike me about this. Cruddas has a habit of popping up at inconvenient moments and being disloyal while giving the appearance of 'only trying to help'. This is the man who has now refused office in a Labour government twice. The more liberal elements of the media interpret this refusal to dirty his hands as an honourable move of one of the few remaining idealists in politics. I choose to interpret it another way. He's frit.

The second thing is that reading this interview, you get the impression that here is a man who really fears he is about to lose his safe seat. He gave as one of his reasons for refusing office the fact that he wants to concentrate his fire on the BNP in his constituency. So far he has done it to remarkably little effect. He knows that the BNP are not taking votes away from the Tories. They're taking his, and there's precious little he is doing about it. The most revealing sentence in the interview was this...

Mr Cruddas expressed concern that Mr Cameron was invading Labour's natural territory and being advised by so-called "Red Tories" urging a return to traditional, One Nation Conservative policies and community-based solutions, such as a people's bank. "It is very, very sophisticated, very worrying for us," he said. "It is not just about policy but language. We [Labour] still have a one-dimensional take on Cameron. I think Cameron is doing well."

Cruddas knows Cameron is doing well from the voter reaction in his own constituency. The Conservative candidate, Simon Jones, needs a 7.8% swing to dislodge Cruddas. He's one of the party's best grassroots campaigners and Cruddas knows he has a fight on his hands.

So his interview today was almost a cry for help from a very "frit" man. And he has every reason to be.
Posted by Iain Dale at 2:13 pm

I think Cruddas is genuine - and he definitely does have integrity. He turned down a cabinet job because he knew Gordon Brown didn't 'get it'.

He's said really interesting things in the press today about the importance of politicians having 'emotional intelligence' . Cruddas says Cameron has all the qualities needed to make a good leader - he also said Cameron is doing a scarily good job.

So, he's telling the truth - Labour should listen to his advice because he knows where his party is going wrong. He is not in denial like most other Labour politicians.

"The second thing is that reading this interview, you get the impression that here is a man who really fears he is about to lose his safe seat."

And he has every reason to fear that...

I like Jon Cruddas. If he has reason to lose his safe seat then what doesn that say about Labour in general?

That they are doomed.

for those of us who are not in the know - what exactly does 'frit' mean?

I stopped reading the piece at "David Cameron could outflank Labour by adopting a radical agenda".

So David Cameron isn't going to outflank Labour, since Cameron is as radical as a cheddar cheese sandwich on white made by a nice lady at the WRVS.

Canvas, I too wasn't sure about the meaning of 'Frit', so looked it up in the dictionary and am now sure that that was not the word Iain wanted to use...

"...A mixture of silica and fluxes which is fused at high temperature to make glass" or "...A similar calcined and pulverized mixture used to make soft-paste porcelain or ceramic glazes"

I don't know John Cruddas personally, but I don't think either of the two descriptions apply to him.

Iain, I'm just wondering...if you think John Cruddas is frit (whatever that means) because he refused office...

does that same label apply to Ed Vaizey as well? Or does Ed just get tagged 'fit'?

Canvas: at the risk of pointing out something that is screamingly obvious to almost everyone reading this, 'frit' is Lincolnshire dialect for frightened, and was famously used by Mrs Thatcher about an opponent. It has therefore become part of the arcane jargon of the International Tory Conspiracy.

Tachy, thanks for explaining that.

A) I grew up in the States
B) Couldn't bear Margaret Thatcher.
C) I don't know any Tories in real life :)
D) Where is Yorkshire?

Canvas, I think you are becoming delusional. What on earth is your point about Ed Vaizey?!

I seem to remember Mrs. T using the word "jiffle" also. People from Lincolnshire and Norfolk would understand it, though there is no need to be mardy about it, if you don't.

Norfolk dialect is under threat. When will government funding be available? When will the BBC have a Norfolk Dialect service and when will Norfolk and Lincolnshire Councils be promoting awarenesss on the subject. That's what I want to know.

Iain, Ed Vaizey turned down a seat on the shadow cabinet. right - so - is he 'frit' ?

I intensely hate his politics but as a human he comes across a decent fella, he's not like the rest of his party who give me the RAGE on sight

Nice to hear of an MP with a smidgin of integrity. Dave is doing a good job now, or Gordon Brown is doing such a bad one it would make any opposition leader look good.

Perhaps GB should stop running round in headless chicken fashion and take a leaf out of Obama's book. The fiscal stimulus plan to put $335 million into preventing sexually transmitted diseases can only help the sex trade.

Principled or frit, it makes little difference - and the two positions are not mutually exclusive.

As to the real motivations of Cruddas (and for that matter, Vaizey) - we shall probably never know, but I think there's much more to it than meets the eye. In any event, it's a wise man who knows when to refuse riches, power and blandishments.

So, a good, grass-roots Tory is winning back to the fold of sanity those working-class voters that Labour managed to flip over to the BNP? Good. No disrespect to Jon Cruddas, he can see the problem and like he says... "I can see David Cameron is doing well"

I grew up in Essex and would have sworn canvas was a native Essex girl from how and what she writes.

"I love the English language just like I love all American things. But I confess that I don't feel confident using complex sentences or big words, hence my famous minimally expressive style - all the "gees" and laconic answers to interviewers. Most of all, I have developed listening as an art form." Andy Warhol

We are a milestone along the road to a fairer, more equal Britain with the new Equality and Human Rights Commission. These people consider how we live together "as serious as climate change" so that's ok then. I think they are the very ones to embrace WW's suggestion of funding some initiative to better facilitate the language and culture of lincolnshire people. There are many foreign immigrants who have been here for 20 years or more and haven't bothered to learn English and they have public funded interpreters, free english classes and important documents with added translation in their own language. I think this should be made available to all the people of lincolnshire immediately. At the tax payers expense.

I hope Gordon Brown proposes this. Just before the general election.

"I love the English language just like I love all American things."

So now the Yanks want to own our language, too.

"Listening as an art-form"? Hillarious.


Warhol - a brilliant self-publicist. But an intellectual?

This is why Conservativism offers no resistance to modern day Fascism and is letting Socialism take the full force of racism, sectarianism and the desire for Social division.

He will be reminded of his shame around May 2010.

Here is my message to John Prescott on his blog> It appears to appear, disappear then appear...

so just for the record in case it goes missing again...

"JP, you might be "in there fighting" but are you listening? There's no point in shooting the messenger. Jon Cruddas appears to be one clued up politician.

Gordon Brown might be "working around the clock" but quite frankly that's his job (which we the public didn't elect HIM to do).

Yes, you can try to transfer ALL the blame on to the bankers or the USA - but it doesn't ring true. What did the Labour government do about regulating these bankers in the first place? Why didn't the government foresee or plan ahead for a 'boom and bust'?

I love the way you imply that Barack Obama's harsh words to bankers are somehow in tune with the words of Gordon Brown. Hilarious. Barack Obama was voted in to sort out the mess that the last government created. A mess that Labour helped to create.

For example, your Labour government aligned itself as best buddies with George Bush and the Republican Neo-Cons for eight dreadful years. Labour was an eager accomplice to George Bush's war crimes.

Labour and the George Bush Neo-Con Republicans were in bed together for all that time .

Now of course you want people to think that Labour is in bed with Obama. No Way. No Chance. Obama sleeps alone. His amazing stardust stays with him in DC where it rightly belongs.

What people want Gordon Brown and Labour to do is stop all the bravado and humbly apologise for the mess that you got us into.

Emotional intelligence matters. So does humility."

Not sure where Jon Cruddas stands,
He says he is campaigning against a prison in Dagenham. Yet it is a seems to be a campaign only soaking up the local opposition to the prison to channel it through him. In order to do nothing but sit on his hands and keep quiet in Parliament.

If he truly was committed against the Prison in Dagenham, I would expect a proper Campaign using the resources he has to publicise via all those newspapers he gets piad to write for?

What is the strategy of the campaign, for such a media savvy politican, a petition is not really grabbing headlines. It is merely diluting the thunder & cohesion from those who were already running a campaign. Their campaign needed leadership, and Jon Cruddas's connections, but they got stagnation on the back pages of local labour party handouts only.

Iain my name is Gordon Kennedy, if it was not for the efforts of my local MP.

I would not have decided to stand as an Independent Candidate at the next general election.