Who Are the Top 100 Political Journalists in Britain? 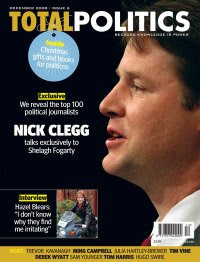 In next month's issue of Total Politics we have an eight page feature profiling Britain's Top 100 Political Journalists. You can see the feature in the online e-zine format HERE or in text format HERE. We polled* MPs, journalists themselves and members of the Total Politics Facebook Group. This was the combined Top 20...

So 6 of the top 20 and 11 of the top 20 are from the BBC, which just shows how much our political coverage is dominated by them. At the same time as the Total Politics poll, I also asked readers of this blog to do the same ranking. These results were not included in the TP Poll.

A rather interesting contrast, wouldn't you say? The ones in red aren't in the TP Top 20 at all. So the likes of Andrew Neil, Ben Brogan and Fraser Nelson will no doubt think that the readers of this blog are far more discerning that the massed ranks of politicians, journalists and TP readers. I, of course, couldn't possibly comment.

** The December issue of Total Politics goes on sale on Friday in all branches of W H Smith and selected Borders and Waterstone's. It includes interviews with Nick Clegg, Sam Younger and Hazel Blears, as well as the start of a new series of regional profiles of marginal constituencies by Robert Waller.

What are they on?

Iain - you've shown Andrew Neil in black on your list but he is not in the TP top 20. On the other hand you have shown Simon Hoggart in red although he is in the TP top 20 at number 14. Pedant mode off...

That aside, as you say it is an interesting contrast

What's wrong with TP readers judgement? Can't they distinguish between rampant BBC egos and political journalism? Just shows how low our political culture has sunk. What would we do without the blogs?

Evan Davies, the weirdo with the nipple clamps and Paxman the pantomime dame TV presenter top of the list. Says it all.

Peter Oborne and David Hencke have to be seen as pretty serious omissions.

Also interesting to see that Evan Davis is now regarded as a political journalist despite never having worked in the lobby, while Robert Peston isn't despite having worked there for several years.

Paul, Just checked. You are right about Kirby. Can't quite understand how that can have happened and am making enquiries!!

I understand the point about Davis, but he does present the most listened to current affairs programme. Peston is an Economics journalist, which admittedly crosses over. Perhaps he should have been included.

Is the poll statistically relevant?
How did you choose the 100 MPs? Are they split proportionally on party lines?
Was the MP block weighted against the 500 TP readers?
Were MPs or lobby correspondents also able to vote on TP?
Just curious..

Andy, read the accompanying article. MPs/Journos/TP Readers were split 33% each. So if you ask: is it statistically relevant, the answer is no.

How did you choose the 100 MPs?
We emailed them all and gave them a link to click on.

Are they split proportionally on party lines?
Not perfectly, no. Which was why we split out Labour & Conservatives in the magazine.

Were MPs or lobby correspondents also able to vote on TP?
Only if they were members of the TP Facebook Group. So far as I know, none are.

Any listing without Simon Heffer and his opinions on Dave is not worth bothering with. Most of the BBC people are worthless and woudn't be paid in washers in the private sector. You have also missed out bonkers from the Mail. Proved right about Dave and the Tories.

Robert, Clearly you didn't look at the list as Heffer is No 88.

And if you think Hitchens has been proved right, you are more bonkers than he is.

At least the vile and putrid Alibi-Brown isn't in the Top Twenty.

Tinsel Tits at number 1? You sure?

The interesting thing about this list is how few of them are really journalists, in the old-fashioned sense of 'reporting'. Most are commentators; some are effectively newsreaders/interviewers. Most disappointingly none of them is an investigative journalist in any sense- its difficult to imagine any of them really uncovering any kind of serious news story, rather than simply talking about it.

Er, Evan Davis is hardly a political journalist. He was a very fine economics editor, and is making a good fist of hosting 'Today' where he is entrusted with the occasional light-weight political interview. Does he write anything much on politics itself. Fairy nuff, most politics at the moment is answerable to economics, but that that doesn't really make ED a political journalist.