Go on then Prime Minster, Tell Us: Who's Saying We Should Do Nothing? 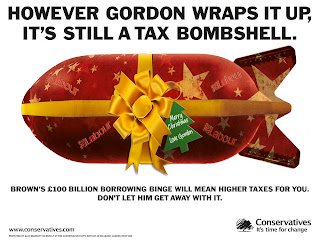 Watching Gordon Brown's interview with Jon Sopel, his constant mantra is that it would be irresponsible to "do nothing". The constant implication is that this is the Conservative position.

Perhaps the Prime Minister could tell us just who is suggesting that "nothing should be done" and that "government should sit on its hands". He can't, because no one has done any such thing. The Conservatives have suggested any number of things to help people through the recession.

The Prime Minister is yet again trying to deceive the British people. It's bad enough that he is trying to hoodwink them into thinking that a tax cut in these circumstances comes with no cost attached. The Tory poster campaign to highlight just what these costs are is a good idea. People deserve to be told the truth.

UPDATE: This is from David Cameron's interview with Dominic Lawson in the Sunday Times News Review today...

“Of course the prime minister will try to paint one of his famous dividing lines because he sits in Downing Street endlessly scheming up dividing lines. The real dividing line is that I’m telling the truth about the bad state of the public finances and he’s taking everyone for fools. That’s a dividing line I’m happy to debate between now and the next election.”

But the Conservatives have been drowned out by the NuLabrador PR machine. The Tories need to deal with Mandy and pretty sharpish.

And the Brownie Propaganda Machine spins and spins... Sean Lay, the BBC 'journalist' interviewing Liam Cappucino Byrne (TWTW, BBCR4 1pm) let Byrne go completely unchallenged with 'the whole world blah blah help people blah blah... and only the Tories would do nothing'. Lay clawed a point back by correcting Byrne when he repeated 'the Tory Party Deputy Chairman said the recession should be allowed to continue'.