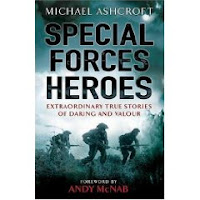 It tells the story of forty SAS and SBS soldiers who have been awarded medals for their acts of bravery in the service of our nation. There's also a Channel 5 series on at the moment based on the book as well as a website, which details Ashcroft's motivation for writing the book. All the proceeds are being donated to Help for Heroes.

Jonathan Isaby reports on ConservativeHome that Cilla Black was at the launch. Bugger. I missed her!

Anyway, if you're looking for a good Christmas present for your father, look no further. Buy it HERE.

All the proceeds are being donated to Help for Heroes.

What do you consider to be 'proceeds'?

Are you not taking a profit?

Sorry? I am not the publisher or author of this book! Michael Ashcroft is donating all his royalties from the book to help for Heroes.

? When I looked at it, I appeared to be in your 'Political Store' and thought you were selling it - is that not so?

Pete, are you trying to be funny? I just clearly explained - as I did in the original post - that Ashcroft is donating his proceeds to Help for Heroes. He is the author of the book.

I have linked to it in my online store. When I do that, it generates one or two sales. I get 5%. So if I sell one copy I make about 55p.

I have already made a donation to Help for Heroes.

Iain, I'm not here to fall out with you. I always check where my money is going before I give to charity as, in so many cases, there seem to be CEs on £100k+ pa - I don't give to them.

As it happens there are a couple of poppies here and two downloads of 'Heroes'...

I admire you for this, Iain.

Just now I looked on the Royal Marines' website to see if the i/ds of their two dead have been released (not yet). An admirable young man I know is serving there and every one of these announcements puts me and my family on tenterhooks.

I wanted to protest (again) to No 10 about the waste of British lives in defence of a corrupt, Sharia-based State, but they are clearly regretting making themselves available to just any old correspondent. This is what appears there:-

We have decided at this time that it is important to take another look at the E-mail Number 10 service to ensure that it meets the same high standards as the other content and communication measures that the website delivers.

Unfortunately, this means that we will be unable to replace the service as quickly as we had hoped, but we aim to have it up and running as soon as possible. Please accept our apologies for any inconvenience caused."

Thanks for the book recommendation.

I *have* ordered it for Dad's Christmas present.