The Old Ones Are the Best 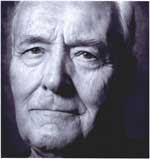 Tony Benn is reported in the Telegraph Spy column as telling LBC Radio: "I got a death threat the other day. I haven't had one of those for years and I was so chuffed that someone thought I was still dangerous." Cue chuckles. The only trouble is that Benn has been coming out with the line for several years. It's a good one and always goes down well with an audience. And he's not alone in wheeling out tried and tested laugh lines. Most politicians do it. I remember Michael Portillo got into trouble several years ago when he told the exact same jokes at a dinner which he had told at the same dinner a few years before. Ann Widdecombe has her "Christian principles joke", David Davis has his "diamond ring joke", and I have my "Ann Widdecombe's knickers" joke. And if you haven't heard me tell that one before, I can guarantee you will, if you come to an event I am speaking at!
Posted by Iain Dale at 10:11 am

Benn is one of the old music hall turns who could make an entire career on a single set of gags. Has anyone not heard "When I was four I met (insert name), I sat on his knee, he gave me a biscuit" It's the way he tells em

Isn`t it right that you come as a family pack with Ann Widdecombe as the Dale and Widdy show ?

I dread to think what humour might be rung from the old bird`s under claspings .Does it involve you wearing them whilst on television so as to enjoy the frisson of the illicit ?I shall assume it does .

Goodness, isn't the Spy column lamentable. It would have been a half way decent diary story, as you know Iain, if they'd pointed out that he keeps retelling the story. But oh no. Instead, they simply listen to the radio and then print what's said. My pet cat could do that for God's sake. I notice another of today's Spy items is a correction from a clearly pissed off but good natured Mr Suchet. I say: Give Iain the Telegraph diary!

Tony Benn emailed me his support for Harlow's Referendum Campaign and has written to all MPs about the Treaty.

He's one of our finest politicians and is widely respected among people of all parties. I heard him make a stunning speech in Harlow some years ago, he had us all on the edge of our seats and received a well deserved standing ovation.

Anyone who needs a ballot paper for Harlow's Referendum, by the way, can still obtain one in time to vote if they contact the following by Thursday: