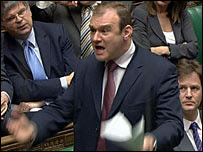 LibDem Foreign Affairs Spokesman Ed Davey was ordered out of the Commons Chamber after the Deputy Speaker ruled that a LibDem Amendment to the Lisbon Treaty Ratification Bill would not be called. It sought a referendum on EU membership. Davey reacted with anger and after he repeatedly argued with the Deputy Speaker's ruling he was ordered out of the chamber. Several LibDem MPs upped sticks and followed him. Truly a pathetic sight. I could never understand why Nick Clegg didn't junk this ridiculous policy when he had the chance to, and instead commit his party to sticking by its manifesto pledge of a referendum on the EU Treaty itself. Anyway, see if you can come up with a suitable caption for what Nick Clegg is thinking in the above photo. Photo credit: BBC.
Posted by Iain Dale at 6:36 pm

People of England outraged by lack of referendum on anything.

News media ignore one of largest protests in parliament for some years and does not explain what the lib dems are getting angry about.

I have to agree with the view that the Lib Dems appear to be showing a spine absent from the other parties.

Well the tories and lib dems voted against holding a referendum on the treaty/constitution, last week in the EU!
Yes the tories, their leader Chichester giles or something.

So this ploy today by the Libdems was obviously a try on to extricate the Lib Dems from their disgraceful decision not to seek a referendum on the treaty/constitution.

Clegg looks as if he is saying. 'as HE got a drink problem, he is red around the gills?

Ed, you really need to curb your good lunches!

Why is anyone suprised?

Nick Clegg is proving the LibDems always get the wrong man:-)

and the LibDems are proving they have less common sense than the Labour Party (whom they support).

Storm in a teacup carried out by political midgets.

I am not a Lib Dem supporter. But their policy makes more sense. A vote on the Lisbon Treaty would no doubt be subject to the usual EU shenanigans whereby a 'no' magically becomes a 'yes'. Either that, or this zombie Treaty would rise from the dead again after being 'abandoned'.

No what we want is a vote on our membership in principle of the EU. That would have a degree of finality about it. And we could make a clean break from it, and get back to running our own country for ourselves.

Strange because no doubt the Lib Dems would campaign to stay in. But then no politician in their party or elsewhere is packing the balls to lead this country outside the EU.

Nick is happily destroying the credibility of a future rival, and doing the EU's bidding at the same time.

"And the Oscar for best supporting Actor goes to ... Ed Davey for 'Accidential death of a policy'"

"...when one lies, one should lie big, and stick to it. They keep up their lies, even at the risk of looking ridiculous...."
(Goebbels/Clog)

Clegg: "I bet Iain Dale manages to manufacture some false outrage about this in a whiny blog post about the Lib Dems"

Speaker Martin keeps his job as long as he does what Brown wants and to hell with anything else ?

I thought only muslims got "outraged" or is that just outraged about nothing ?

"Don't make him angry. You wouldn't like him when he's angry."

I quite liked the Deputy Speaker, he was quite firm at the beginning, a good potential Speaker of the House.

"Oh no - that hand's gone as fuzzy as our thinking".

'How many years am I going to be sitting here watching clowns like this, I wonder. I wish I could control my competitive instincts. Here I am, lauded by the press as a good leader and I've got absolutely no chance of being in charge of anything other than this lot. I'll never even be in charge of a 3rd rate ministry, let alone attend an international leader's summit.

Cleggers is thinking (for a Libbie, that's something!):- 'leadership material'.

Yes his bum does look big in that.

Clegg to self "I wonder what he looks like naked?"

Ed Davey says he got the idea from Simon Ashley our glorious leader in Manchester Town Hall ... a man who has lost two defectors, in two different directions, already this year.

Can't you Iain. I can. He knows we would vote no.

He thinks they would win an election on leaving. I hope he is wrong on that but that he won't realise he is wrong & junk that promise too.

Can't you Iain. I can. He knows we would vote no.

He thinks they would win an election on leaving. I hope he is wrong on that but that he won't realise he is wrong & junk that promise too.

I don't think so. Nice to see a party that actually cares about issues.

Clegg is thinking:
"Why is my colleague so out of focus? Maybe he's not all there!"

Are you the same Iain Dale who wrote an article in the newspapers saying he thought the Lib Dem proposal for an in-out referendum was a great wheeze the Tories should copy?