Sir Ralph Howell: A One Off 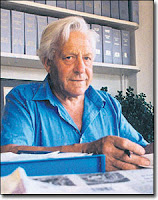 The death of Sir Ralph Howell has robbed Norfolk of one of its more colourful political characters. During my time as Conservative candidate in North Norfolk in the runup to the 2005 election Ralph was unfailingly courteous and helpful to me. He was anxious not to interfere but would occasionally phone me with a piece of wise advice. Everyone in politics needs a wise old owl figure to keep them on the straight and narrow, and Ralph filled the role perfectly.

After he stood down in 1997 he was careful to leave the stage to his successor David Prior, but when I made clear I would welcome his involvement he seemed to relish a brief return to the political hustings. He said he would like to come out canvassing for a morning and it became clear to me just how revered he was by the North Norfolk electorate. Lady Margaret would join him and watch him enjoy himself from the car, for by that time she was very ill. It obviously gave her great pleasure to see her husband back in the political ring. Ralph enjoyed it so much that he came out several times during the campaign. Many candidates hate it when their predecessors reappear. I didn’t. I knew how popular Ralph was and valued his wise counsel.

It is true to say that they don’t make ‘em like Ralph Howell anymore. It’s rare for a country farmer to go into national politics, and those that do often find it not to their liking. They struggle to make an impact. Ralph Howell never achieved ministerial office, but he gained tremendous respect for his tenacity in defending the interests of North Norfolk. His ideas on ‘Workfare’, where peoples may only receive benefits if they work for them, were twenty years ahead of their time. Ralph would be amused that some of his ideas were taken up by a Labour government, rather than a Conservative one.

I'll be attending Ralph's funeral at Dereham Church on Monday. It's a certainty that it will be packed.

* This article originally appeared in my EDP column on Saturday. Photo credit to EDP.
Posted by Iain Dale at 9:07 pm

What a very nice face!

Its a very sad day for us. If only people like him had real power what a better place it would be.

Last time I was in East Dereham I was watching the Light Dragoons after their return fron Afganistan march to the church on a very happy day. This Monday will be a very different day.

Ralph was a great colleague and unfailingly kind and helpful.

I see he lived in Wendling, the village from which some of my forebears came.

Sir Ralph was always very helpful to me personally and I remember conversations at his house, where he showed his love of politics and great knowledge of both North Norfolk and also the work fare proposals. I know he also did what he could for David Prior to help his election in 1997 and acted with the utmost integrity during the selection process and beyond. The Conservative Party today could do with more like him.

I wonder Iain if you have met or seen Bert Hazell, Sir Ralph's centenarian predeceasor?