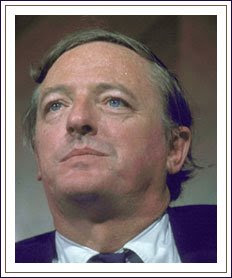 One of the world's most important Conservative thinkers, and founder of NATIONAL REVIEW magazine died today. William F Buckley Jnr passed away during the night according to the National Review Corner blog. They are carrying some very moving tributes. Here are a couple...

He's probably the most gracious man I've known. He is of course a legend on the Right, and legends can be intimidating. The first time we met, my agenda was simply to avoid saying anything dumb in his presence. Yet he instantly sought to put me at ease. He asked what I was writing about and seemed genuinely curious to know. He listened to me, rather than the other way around. To my surprise, I was comfortable around him—because he had a special ability for making folks like me feel that way.

You can send your own tributes to rememberingbill@nationalreview.com

Oh, no! What a loss to the Conservative cause in the United States and the Anglophone world! He was a giant - and an influential, witty and urbane giant at that.

"The first time we met, my agenda was simply to avoid saying anything dumb in his presence"

An acquaintance hated Buckley because when interviewing people Buckley always led with a complicated monologue ending with an intricately linked question to his guest always using at least one word that most Americans did not understand, especially in context.

Buckley also loved to quote Saints and philospophers in ways that implied both he and the guest were familiar with the entire source of the excerpt, again losing the audience and my friend (a serious conservative) nine times out of ten.

He was a fighter

His Grace is profoundly saddened to hear of this, and feels the loss acutely.

Without Buckley, there would be no viable opposition to the statists. RIP.

The tributes at the NR are unbearably moving. I couldn't read them all the way through.

Anon [6:03] - With regard to his jaw-dropping articulacy, he once, on a TV programme was complaining about long-winded verbal meandering by saying we should "eschew obfuscation".

He was right, of course, as he usually was, but this phrase tickled a lot of Texans (and probably people in other states; I don't know) and the next thing you knew, there was a great blossoming in the big Texas cities of bumper stickers reading Eschew Obfuscation.

The Anglosphere...and much of the free world...has lost one of its Greats. He was a gentleman in all that that word entails.
Condolences to his family & to his many friends

"The central question that emerges…is whether the White community in the South is entitled to take such measures as are necessary to prevail, politically and culturally, in areas where it does not predominate numerically? The sobering answer is Yes—the White community is so entitled because, for the time being, it is the advanced race"

If he is your model for today's Conservative politics, then God help us

I don't wish death on many people (including him) but I can't see what Tories would have in common with him to be proud of?

Brian and Sabretache - The world was a very different place 50 years ago. It is to America's credit that they raised black Americans out of servitude and a servile attitude (and to the credit of many brave black people who helped behind the scenes - it is a fascinating story) to absolute equality.

Bill Buckley certainly wouldn't admit to being "homophobic" because he was a lover of our language and only used real words. Homo, from the Greek, means "the same". "Phobic", as Paddy Briggs does not know, also from the Greek, means "fear of". So you are saying that William Buckley was scared of twins? Matching china? A pair of candlesticks?

He was a man of the world and numbered gay people among his friends and was too gracious to hurt anyone because of the way they were born. Yes, he called Gore Vidal "a goddam pinko queer" on TV, but that's because Gore Vidal had called William Buckley a "goddam fascist". Unfortunately, intellectually, they were evenly matched and, unable to score a point, they both lost their tempers and they both said the most wounding thing they could think of. I believe we have all done this and regretted it later. And that, too, was a long time ago.

William Buckley was a true conservative of the broadest, most inclusive type. He was universally respected throughout every strand of American political thinking. People might not have agreed with his conservatism, but they acknowledged that he was a fine, honourable and kindly man.

Speaking ill of the dead is very low.

Brian - who on this page has claimed to be speaking for the Tories? I think we have been speaking for ourselves. May I recommend that you eschew obfuscation?