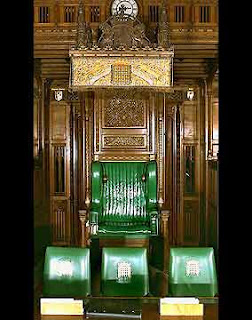 Everyone seems to putting forward their own favoured candidates to succeed Michael Martin as Speaker of the House of Commons. One or two candidates are even letting it be known that they would certainly consider the job were it to be offered. Off the record, natch. So here are my Top Ten Runners & Riders in order of likelihood...

1. Sir Alan Haselhurst (Con)
For: Been deputy for many years and performed well when Gorbals Mick was ill. Popular across the divide.
Against: His age, although he's the youngest 70 year old you'll ever meet.
Odds: 3-1

2. Sir George Young (Con)
For: Respected, with wide experience of political life.
Against: Seen as a toff by Labour MPs.
Odds 3-1

3. Sylvia Heal (Lab)
For: Has few enemies.
Against: Has few friends on the Tory or LibDem benches.
12-1

5. Vince Cable (Lib)
For: Hugely respected, would remove one of Brown's leading critics
Against: LibDems wouldbe reluctant to lose one of their stars and he pronbably wouldn't want to do it
40-1

6. Frank Field (Lab)
For: Liked and respected by most MPs who've never worked with him.
Against: Over Gordon Brown's dead body.
40-1

7. Sir Patrick Cormack (Con)
For: Deep love of Parliament and knowledge of procedure.
Against: Age and battlescars from reselection.
40-1

8. John Bercow
For: Independent minded, turned off by party politics.
Against: More popular with Labour MPs than his Tory colleagues.
Odds 66-1

9. Michael Lord (Con)
For: Experience
Against: Regarded by most as having had his day
80-1


Who do you think might be other plausible candidates? My money is on my home MP Alan Haselhurst. He's been a huge success as Michael Martin's most senior deputy and hasn't put a foot wrong. He carries the right mix of authority and humour. I hope he is indeed Michael Martin's successor.
Posted by Iain Dale at 9:09 pm

What about Kenneth Clarke?

He would absolutely love the job!

Martin's appointment is as good an illustration as any of the abysmal quality of this government.
(And let's hope his successor brings back the full uniform.)

Haselhurst is the man - very capable in the Chair, and apparently squeaky-clean, which is the most important quality. The next Speaker needs to restore the dignity and integrity of the office, and indeed of the Commons itself.

How about a bowl of petunias or a gerbil? Something with real gravitas and no need for 'expenses'.

Or could it be that I am one of the many getting thoroughly fed up with politicians as a class of self serving parasites?

How about Dianne Abbott?

Would Ken be able to sit through an entire debate without needing to nip out for a smoke?

However, if that's a serious list of contenders, I sense an 'anyone-but-Bercow' campaign starting as I type.

"The next Speaker needs to restore the dignity and integrity .....of the Commons itself."

It'll take more than the Speaker to do that and unfortunately Cromwell's dead...

Iain - where are you getting those odds? I'm not sure your book adds up at those prices...I make an underround of about 20%, which could hurt you financially if you're laying those prices!! If a high-street/online bookmaker is offering them, please let us know where, and we will put them out of business...

Richard Shepherd would be very good - Gwyneth Dunwoody, Nicholas Winterton will have their names put forward, though neither can win. I wonder if Gerald Kaufman might also throw his name into the ring. Bercow and Ming just do not seem remotely likely to me.

6. Frank Field (Lab)
For: Liked and respected by most MPs who've never worked with him.
Against: Over Gordon Brown's dead body.
40-1

Fortunately Brown has no say in the matter.

Little Black Sambo said...
"Martin's appointment is as good an illustration as any of the abysmal quality of this government."

The government didn't appoint him.

Sir George Young is the Man!

I go out drinking with Alan Beith. He might seem "incredibly dull" to you, but he livens up towards the end of the evening. Give him a few ciders before he goes on, then he'll entertain you!

The government may not have appointed Gorbals Mick, but its MPs did. Semantics.

"Frank Field (Lab)
For: Liked and respected by most MPs who've never worked with him."

I am surprised that you haven't started a 'Who would be the most fanciable speaker' poll...

Strapworld - That is an inspired suggestion. He would be jovial and collegiate, he has a quick mind, and it would keep him out of mischief. I think this is an outstanding suggestion!

Its worth noting that when Michael Martin was elected in 2000, it was due to the backbenchers on both sides of the House. From what I have heard Sir George Young was the favoured candidate from some prominent Conservative and Labour politicans.
If Martin goes, I am not so fussed about glamour so much as whether they can do the job. Personally I would prefer Alan Beith, Sir Alan Haslehurst, or Sylvia Heal

All this criticism of me is completely unfair, I could do this job pants down standing on my head backwards and no-one would notice any difference.

Can't understand why "Brutus" Cable is dubbed a critic of Comrade Brown. "Brutus" Cable - whilst holding a Conservative seat - pretends to be against the 'government of all the Comrades' when he's a living exponent of the Lib-Lab pact. And don't forget "Brutus" Cable used to be a paid-up Comrade before he left in a fit of pique. [Those of us stuck with "Brutus" Cable as an MP wish to get shot of him, pronto. He's also a road block to a Conservative government.]

The next Speaker needs to restore the dignity and integrity of the office, and indeed of the Commons itself. (Anon 9.41pm)

Absolutely right. The next Speaker has to oversee the Additional Costs Allowance and the Travelling Expenses etc etc reforms and must therefore be a sea-green incorruptible and a strong character to boot. Which rules Cormack out.

But you lot may have to get used to the idea that Michael Martin will be staying.

Repeatedly independent commentators say he has done nothing illegal and it is the rules that need changing not pandering to a smear campaign.

Expect more patient and stakanovitch comrades to go rooting through the expenses claims of your picks. Vince Cable would be excellent but it ain't going to happen while he is still punching above his weight on the floor.

My money is on John Bercow, the independent-minded and principled MP for Buckingham. He is a formidable Parliamentarian who has proved his ability in the Chamber. The fact that he would get lots of Labour support makes him the MOST LIKELY Tory to win, not the least - after all, the election of the next Speaker will probably be held when Labour is still in Government (and even Labour MPs accept that it's a Tory's turn next)! Alan Haslehurst is WAY WAY too old for such a post and George Young is an old-Etonian toff - which, as David Cameron is one too, can't be helpful to the Party image! No Liberal stands a chance - the other parties won't want them to get a look in! That's my two pennies worth on the topic anyway!

asquith (now there's an appropriate name), why are Lib Dems only any good when they're drunk?

canvas said...
"How about Dianne Abbott?"

Oh, I don't know "Tone Made Me ..." I picked Abbot tout as potential ground-breaker a few days ago. If Bercow or Abbott or any of the younger picks were picked they would probably go back onto the floor after a term in office. That's unusual. But not impossible. Ken Clarke would be great.

Just out of interest, I know the speaker takes on, or is supposed to, an apolitical role and goes mostly unchallenged at parliamentary elections, but what about the deputy speakers? Does Alan Haslehurst take the tory whip and vote against the govt when required to? Did he vote in the conservative leadership election, and if he did, who for? Genuinely intrigued about the position of deputy so if anyone knows, would be happy to read the answers.
With out a clear lead in the polls and a possibility of hung parliament, would the Tories not be happier to see a Labour MP in the chair? They may need every MP they can muster depending on the arithmetic after the next election.

Vince Cable, the only politician I've any time for!!

Bercow is the man for the post. He should agree to do a set term (2 parliaments) though - otherwise the post might not be vacant for another 30 years!

Why should Beith's dullness rule him out? In the current climate, I would have thought plodding decency would be a distinct advantage.

And Jill from London: how can Cable be holding a 'Conservative seat'? Or is this like Beijing's view of Taiwan, holding certain seats to be rightfully Tory, usurped by the LibDems through the sneaky tactic of, uh, winning a few elections?

How about Paul Murphy?