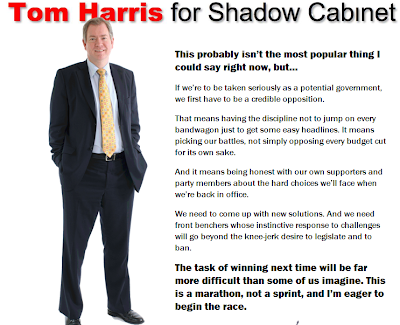 Tom Harris is Labour's best blogger by a long chalk. He's said on his blog that is he succeeds in his bid to be elected to the Shadow Cabinet he'll have to give up blogging. This would be a terrible loss to political blogging, so I am almost tempted to ask Labour MPs not to vote for him on that basis alone.
But if I were a Labour MP serious about wanting to get back into power, I'd read the email he's just sent out to his colleagues and think to myself, "yup, here's a guy who gets it - he understands what's needed to get us back into government". I think this is the second email he has sent out to his fellow MPs and he's clearly serious about his campaign.
And yet is he likely to succeed? I have my doubts. There are too many of the old guard standing and now there is this ridiculous quota whereby 25% of the members have to be women. So instead of Tom Harris lining up in a shadow cabinet photo alongside Ed Miliband, you're more likely to see Geraldine Dreadful.
Posted by Iain Dale at 1:28 pm

Aren't being an MP and having a brain mutually exclusive?

Sorry Iain but I think Mr Harris has learned from the responses to posts on his own blog that "knee jerk" opposition is not going down well. He has been guilty ( in my opinion ) of having a go just for the sake of having a go. Even responding to one comment that "it is what the opposition do". He would have to give up blogging to avoid the hypocrite tag.....

Anyone with the slightest taint of NuLaborism should never be allowed into a position of authority again - even if it is only the Shadow Cabinet.
They should never be forgiven for what they did both to the Labour Party and this country.

Tom Harris confuses me. His voting record is a mixture of straight up Labour toady and powder-wetting rebellions on arcane amendments. An honest man who by all accounts is a very good constituency MP. And yet, even as a blogger, cannot quite relinquish control of the agenda and censors a lot of comments that are critical of certain members of his party, even if it is polite and considered. Is he coherent? Yes. Articulate? Yes? Principled? For an MP, yes. Tom would be competent and popular.

Still, since he is the MP most likely not to be caught sharing a hotel room with a glamourous assistant, and therefore stands a chance of lasting more than a week,I think he deserves another go.

"we need front-benchers whose instinctive response to challenges is to go beyond the knee-jerk desire to legislate and ban".

On the irony! This from a man who was one of the most vehement supporters of the former Labour attack on civil liberties, the ID card scheme, 42/90 day detention, elected house of Lords and so on. He there was new Labour anti-liberal bill in the offing, he was there salivating to vote for it. Did he once ever engage brain?

I don't see why he has to give up blogging though.

Your endorsement will have killed off whatever chance he may have had!