Lembit: You Cannot Be Serious 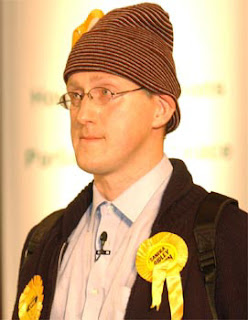 Well that was a bit odd. Every Wednesday on my LBC programme we have an hour at 9pm called the LBC Parliament. Three politicos come into the studio and we talk about the political stories of the week. Tonight we booked Labour blogger Hopi Sen, Tory MP Nick de Bois and LibDem aspirant London mayoral candidate Lembit Opik. Bear in mind that if you're hoping to become London mayor, an hour on London's premier radio station provides you with quite a good audience to win over.

We had several people email and text in to question how serious Lembit was about this. They questioned his apparently insatiable desire to be a celebrity. Lembit made a passionate plea to be taken seriously and explained why people should do just that. He said how committed he was on important issues ... and then half way through the hour he upped and left to go to a nearby comedy club rather than talk about them. Admittedly he had a good excuse - Stephen Pound MP was making his standup debut - but I'm afraid LBC listeners were less than impressed. By doing what he did he just confirmed people's prejudices that he just isn't serious.

Lembit was kind enough to phone in at the end of the programme to hand the phone to Stephen Pound who in his own inimitable fashion described how during his stand up routine he called Michael Gove a c***. Well I'll bet that had them rolling in the aisles.

I like Lembit, I really do, and I really wish him well. But if he wants to run for a serious office he's got to play the part. He's a very funny guy, but he needs to learn that he can do 'funny' or he can do serious politics. He can't do both. He might recall that when a certain Boris Johnson realised that, he went on to win the mayoralty. He still remained himself, but he adapted his character to the campaign he was running. He compromised. Lembit shows no sign of doing that and it will take a very persuasive campaign manager to make him do so.
But in the meantime, all this will be grist to the mill of the LibDems who want 'anyone but Lembit'.

Indeed, has Lembit not yet twigged that this is why he's no longer an MP? His constituents got sick of him being a comedy routine.

The Comedy Club seems just up his street...perhaps he ought to consider a double act with that other purveyer of wit and call themselves the `Two Pillocks`...

Stephen Pound has been a joke for a long time.

"Well I'll bet that had them rolling in the aisles."

Not if they're old enough to remember Stab in the Dark.

Iain: "...he had a good excuse - Stephen Pound MP was making his standup debut"

He's been chief comedian of the longest running farce in the West End for years - you can see him and other clowns at the Palace of Westminster Theatre - though bear in mind they charge the audience a fortune for their show.

Lembit used to be on the cast himself, but, due to popular demand, has moved onto other things :-)

I can't work any of this out. It is as though the whole world was turned inside out in an instant, which MUST be a logical impossibility.

Is Norman Tebbit still planning on becoming a Rock Salmon fisherman, btw, or is that all internet guff, 2?

The things is, Boris didn't change, and hasn't changed at all. He just showed that while having the air of being a buffoon, underneath he was serious and could do the job.

You cannot hope to succeed in 'standup' unless you use the C word - its guaranteed to send the obligatory lefty bunch of twats who form the regulation audience in to orgasms of hysteria.

Pound is of course well qualified to succeed in 'standup', he possesses the prime criteria - he is not funny.

Opik is just treating the mayoral election like any other faded celebrity would treat 'Get me out of here ...'; in fact of course thats where he will end up.

Please let our former MP become mayor of London - then there's no danger he'll try to win his seat back. Without him we will get a Liberal MP next time. Don't forget 'anyone but Lembit' started in Montgomeryshire. We had enough of the self-publicising pillock and were happy [for one parliament only] to have a Conservative MP just to get rid of him.

Of course he isn't serious, he's a LibDem.

He was the local MP in my brothers constituency, I met him at a charity Father Xmas run. I think the kindest thing I could say about him is that he is a twerp.

If he is typical of the Guardians of our Liberties, no wonder we are in a world of crap.

What a pity the post of Court Jester was abolished. Watching Lembit fight Vince for it would be fun

He is a libdem,not seriuos and a waste of space like Cable and Hughes.

Stephen Pound is a pillock.

How the mighty are fallen. Two Labour failures reduced to penury and scraping a living on the boards. Perhaps they'll be better at it than what they've done so far, then again....

We laugh with BoJo, and laugh at Optic.

anything to do with alcohol possibly?

Does this rule apply to bloggers? Perhaps we should ask the stand up comedians at your blog readers event?

On a more serious level I think you are wrong - I don't think that politicians who are unable to demonstrate a sense of fun in public have a particularly good track record (yes I appreciate the irony). Its getting the right balance between serious and funny that is the difficult thing.