That Labour Pledge Card in Full 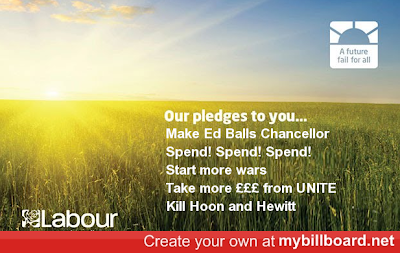 Create your own Labour pledge card HERE.
Posted by Iain Dale at 10:19 pm

Does it contain the pledge to reform the voting system from the 1997 Labour Manifesto Pledge ?

More lies from Labour - it's just a shame that the Tories are also happy to go with a 'shamelessly' undemocratic voting system.

Can we please stop with all this poster idiocy and get back to policy.

Although at the same time we'd have to bar most of the population from voting as they wouldn't understand anything past the "pretty pictures."

Labour was very big on pledges when it was preparing to fight the election in 1996.

Despite the myth that Tony Blair never said anything of substance before the election, Labour made some very specific, very measurable promises and committed them to pledge cards. This was seen as quite an astute move. Committing the party to areas that people wanted to see action on. It was actually much later, when they couldn't deliver, that they changed to Mission Statement style pledges.

1997
We will cut class sizes to 30 or under for 5, 6 and 7 year olds by using money saved from the assisted places scheme.
We will introduce a fast track punishment scheme for persistent young offenders by halving the time from arrest to sentencing
We will cut NHS waiting lists by treating an extra 100,000 patients as a first step by releasing £100m saved from NHS red tape
We will get 250,000 under-25 years-olds off benefit and into work by using money from a windfall levy on the privatised utilities
We will set tough rules for government spending and borrowing and ensure low inflation and strengthen the economy so that interest rates are as low as possible to make all families better off
The problem for Labour was these were not just easily broken manifesto promises, but pledge cards that were issued to people, in order to deliberately hold the government to account after its first term. The pledge cards HAD to be met, or made to appear the pledges had been met. So the pledge cards, really intended to be 'trust us' cards - another arrow in the attack on the dishonest Tory liars -had a large policy influence, despite changing circumstances or priorities. By 2001 Tony Blair decided to ditch old Labour style commitments for a more New Labour sounding aspiration, with broader,easier targets. Also a rolling of 2 policies into one statement, to make a claim of success easier {though conversely, harder too}

Mortgages as low as possible, low inflation and sound public finances
10,000 extra teachers and higher standards in secondary schools
20,000 extra nurses and 10,000 extra doctors in a reformed NHS
6,000 extra recruits to raise police numbers to their highest ever level
Pensioners' winter fuel payment retained, minimum wage rising to £4.20
Just love number one there. How would mortgages be kept low with an independent Bank of England? Well Gordon found a way. Oh yes. and the golden rules were his own rules. Enron accounting can meet any commitment, in the short term.

By 2005, with lots of failures on display in Health care, Policing, Teaching, Public spending and taxation, the most bland, innocuous, unquantifiable pledges, released only because they had been done before and to escape the charge of abandonment appeared without fanfare.

1. Your family better off
2. Your family treated better and faster
3. Your child achieving more
4. Your country's borders protected
5. Your community safer
6. Your children with the best start

Just awful! And they added an extra sixth, even more pointless pledge too!

Just look at how they have gone from wanting to achieve things in 1997 to wanting to appear to have achieved things in 2001 to just hoping no one will notice the total lack of achievement in 2010.

Already have, Iain. I might be a minnow but always on the ball!!

Lies is the best description.

Forgot add this one.

Well said Bill Quango (both comments). Time for this tissue of lies and failures to be given a much higher profile. It's been thirteen long years of gross incompetence and deliberate deception.

Er, No Boom and Bust

a free laptop with every ASBO

er, No Boom and Bust?

Following the revelations about how Derek Simpson spends his members' money (what's left over after he gives most to Labour), the thoughts are undless.

The Even Newer Labour Pdge Card:

I remember some guy from Brighton took the Labour party to court a few years ago claiming the party broke certain manifesto pledges after the 2005 election, and he wanted a court to make manifesto pledges enforceable by law. No surprises it got thrown out so Labour can say what they like. And if people are seriously stupid enough to believe them a 4th time around God help us all.