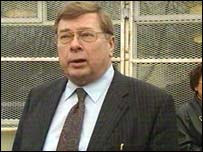 Former Wrexham Labour MP Dr John Marek has joined the Welsh Conservatives. Dr Marek also served as a Welsh Assembly Member from 1999 to 2007. He sat in Parliament between 1983 and 2001. Here is his statement...

"Today I am joining a party which has changed, which has ideas, energy and vision, and which is serious about changing this country’s fortunes after 13 years of Labour failure.

The Labour Party and I parted company shortly after Tony Blair became Prime Minister and I have never regretted my decision.

New Labour has lost all purpose and authority – facts clearly demonstrated in the sight last week of former ministers seemingly more worried about lining their own pockets than serving the people who elected them.

The country needs change. And in Wales we need a multi-party democracy which has been denied to us for too long.

I am pleased to be joining the Conservative Party which is now in the centre of the political spectrum and on a number of issues is to the left of Labour.

David Cameron’s social conscience is at the heart of my decision to join the Conservative Party.

He understands the difficulties faced by ordinary people and I am convinced that as Prime Minister he will govern for everybody.

Under Labour every household and every business in the country is paying the price for Gordon Brown’s boom and bust.

Our personal civil liberties have been eroded, and the government has created a vast army of administrators which are providing poorer services today than before 1997.

We need change and I am convinced the Conservative Party will achieve this.

I believe it is only through a Conservative government that we can fix our broken economy, restore our civil liberties, ensure our public services meet the public’s expectations, and tackle the big national and international issues facing our country today.

I am delighted to be working with Nick Bourne and Cheryl Gillan again. They are people for whom I have the highest respect.

There is no keener, hard working champion for Wales at Westminster than Cheryl Gillan.

And I know that in Wales under Nick Bourne’s pragmatic leadership in the Assembly we can look forward to Conservatives in government.”

Should I be surprised by anything in politics? The answer should be NO but this move does surprise me. It sort of confirms that movement between the three main parties is fairly simple these days as not much separates them.

I remember 30 years ago feeling that there was a real division of thought, but then we had the Iron Curtain and socialists were suspect, especially on the picket lines!

But least anyone forget - the good doctor has previous. He joined forces with that other Parliamentary loon, Tony Marlow, to vote out Crossrail first time round in 1994. And his reasoning? There was sufficient evidence that anyone would use it.

As backward and utterly blinkered view as anything Parliament has spewed out. And this from an economist who was financially sponsored by the RMT who supposedly supported investment in the railway network.

You're welcome to him.

It should be no surprise that the Conservatives have accepted the defection of someone to the left of the Welsh Labour party . He will fit in well with the London ex Respect/SWP councillors and suspended corrupt ex Labour councillors .

Not a fag paper beteen Labour and the Tories these days

If they are losing people like John Markek to the Tories, then things will become more interesting for Labour in Wales.

Wonder if PC will regret leaping in to bed with Labour?

Bit of background on Marek here. Not the first time an ostensible leftist has made the jump to the Tories.

Not entirely sure that this is something for celebration.

Marek left Labour long ago, and was last involved in a ex-Labour/republican socialist lash-up known as Forward Wales, along with Ron Davies.

Marek long ago lost any base he had in Wrexham, and alienated the local football club's fanbase by jumping into bed with a fat crook known as Mark Guterman even after it had become known that Guterman was a fat crook who was trying to asset-strip the football club. I can call him a fat crook with impunity because a) he is and b) he has no reputation to defend. Marek then leant a big fat lump sum to the new owner, a chap by the name of Moss, and claimed he wasn't charging interest. He was, at 6%, as the accounts later proved.

Done very well out of the ol' politics game, has 'the doctor'. A millionaire no less.

This news is both bizarre and amusing. I wonder if Marek will now resign from the RMT, Britain's most militant trade union?

So in some areas the Conservatives are to the left of labour? Well that's hardly a surprise - although it says far more about the Conservatives (so-called) than it does about Labour. It's just one of the reasons why Dave has lost my confidence and my vote.

Well to be fair it does show how inclusive the tories are now. They really will take anyone.

Will he be joining Balfe on the Union outreach programme I wonder?

You talking about Pink News or something?

Another politician follows the money.

"The country needs change. And in Wales we need a multi-party democracy which has been denied to us for too long."

As opposed to the one-party dictatorship it currently has???

Amusing that somebody first elected under Foot's leadership should joing Cameron's party!

The BBC does not rate John Marek's defection as UK news. It only gets a mention on the Welsh news page.

Now if he had gone in the other direction they would be dribbling with enthusiasm to tell us.

Tories in wales are hoovering up every maverick tosspot - marek was apparently turned down by the lib dems (the humiliation) and he only quit lab because they deselected him.

Perhaps John Marek can ask North Wales Police why they have retired from traffic policing. My village of Penyffordd is a rat run each morning. Councillors scared to intervene for fear of loosing votes from the speeders...............
CBM Howie Williams behaving like the Keystone Cops aided and abetted by Penyffordd Community Council.

Marek is fiercely anti-hunting, but, more to the point, is a close associate of Tommy Sheridan's, and founded and led Forward Wales as a counterpart to Sheridan's Scottish Socialist Party, the basis on which it secured funding from Bob Crow's RMT.

It was only wound up in January of this year. But Marek has clearly wasted no time in finding an alternative vehicle for a programme such as can warrant Trotskyist endorsement and cod-Stalinist, neo-Scargillite funding. Yes, I voted for No2EU - Yes To Democracy, but for the sake of Peter Shore's old agent and the leaders of the Visteon and the Lindsey oil refinery workers. I drew the line at applying to be a candidate, because, purely personally, I could not bring myself to line up in that way with many of the others involved. More than anything, it impressed on me the need to eschew such involvement, as well as abstentionism and silly names, at the next stage of our movement's re-emergence. But David Cameron clearly has no such scruples.

And the key proposals of Forward Wales specifically, rather than as part of any wider Sheridan or Crow movement, are now manifestly the policy of the Conservative Party: Wales to have at least the same level of devolution as Scotland currently enjoys, and drastic government action to be taken to enforce the public use of Welsh even in the most Anglophone of areas. After all, why else would Marek have signed on the dotted line?

Will Marek be joined as a New Tory by the other founders of Forward Wales? By Ron Davies, one of the very few former Cabinet Ministers without a seat in either House, and a noted campaigner both against shooting and for the abolition of the monarchy, recalling Marek's own parliamentary question to Tony Blair requesting that the Oath of Allegiance be replaced with something acceptable to anti-monarchists? By Graeme Beard (not the Australian cricketer), a former Plaid Cymru councillor in Caerphilly? Or by Klaus Armstrong-Braun, who in his time on Flintshire County Council was the only Green Party member ever elected at county level in Wales?

Don't really know should I be happy about it or is it just another political move :|