Labour Isn't Working (And Want to Trash Your Holidays) 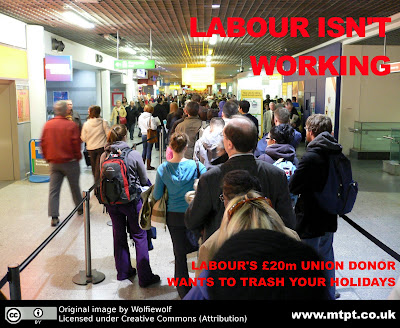 Note: It has been brought to my attention that the photo which was previously here was not available for derivative use. It was sent to me by a blogreader who presumably photoshopped it himself. If anyone would like to replace it with a photo of an airport queue (that they have permission to use) with the caption Labour Isn't Working - Labour's £20 million union donor wants to ruin your holidays, be my guest.

In future, if you send me photos which you have photoshopped, it would be nice if you actually had copyright permission to use them. I have no way of checking that out easily, so please do act responsibly.

Apologies to the photo's owner - someone called DiamondGeezer on Twitter. He has just tweeted...

To be fair, @iaindale couldn't have known it was my photo - he's not the spoof poster's creator.

Get these posters up round airports pronto!

It would behoove you, Iain, to fully strip apart what, exactly, makes your glorious leader haye white people so much he blames them for the failure of black owned and operated businesses. Is the Tory party now officially Marxist?

Or: "Labour: Uniting to trash your holiday!"

"Labour: You'd have to be a real Charlie to try this stunt!"


...the finest money can buy

Augustus Toplady:
Liked your hymn 'Rock of Ages' a lot. But you seem to have suffered severe softening of the brain over the last 250 years. Oh well, death will do that to anyone.

"Get these posters up round airports pronto!"

You'll need to give them directions. No-one on the tory front bench has flown commercial for years.

That's my photo, which London Architect has used without permission.

Lets not forget how Labour have taxed holidays with their political pursuit of the unproven Warmist religion !

The Today programme this morning hasn 't mentioned the BA strike once - so I presume it must be over. Foreign press and broadcasters say our budget deficit is now worse than Greece and speculators are betting against an upturn in the UK - the entire BBC has failed to mention that.
Are we to become like Russia during the cold war producing samizdat leaflets and listening to foreign broadcasts to hear the truth about what is going on in our own country?

Misread that as Union "owner"!

You made I laugh.

so where did you get the image from then?

Looks like you're using someone else's photo without permission. Hopefully that fact will somewhat undermine your aim. http://www.flickr.com/photos/dgeezer/2367210790/

Will William's private jet be affected?

I wonder if we could buy shares in the Tory Party and not just Baron Belize? It must be strange having a shareholder registry of one! Conservative Party shares will surely be worth plenty in the coming years given all those opportunities for some serious graft coming up, so I imagine they will sell at a good price. It seems only fair to let the public in on the act.

That photo comes from here, where it was posted under a "no derivative works" licence. Since the Conservatives respect private property rights, I assume you'll be taking it down out of respect for the copyright owner's wishes.

Any evidence for your bollox assertions as to the travel arrangements of Conservatives or is it just the usual trollcrap? No really, I'd be very interested to review your source.

And would you care to cast your eagle eye over the journeys of such people as Margaret Beckett, Benn, Mrs Brown etc, and comment? No I don't think you would.

The fact is simple enough. The unelected Unite union are now running the country - and are in the process of ruining their members jobs. British Airways will no doubt be moving right now to outsource as much of its labour as possible - in order to survive. So I fully expect to be greeted by a Polish stewardess on my next flight from Terminal 5 - assuming that British Airways is still in business.

Can you explain to us why you have broken a Creative Commons licence to gain a cheap political shot?

"No-one on the tory front bench has flown commercial for years."

How does that explain Chris Grayling being requested to produce his passport to Strathclyde Police at Glasgow Airport recently?

"In future, if you send me photos which you have photoshopped, it would be nice if you actually had copyright permission to use them. I have no way of checking that out easily, so please do act responsibly."

That's not really true, is it Iain. At the very least you could email anyone sending you such images saying something like:

"Thanks. I'd like to use your image. Can you please confirm that there are no copyright restrictions that would prevent me from using it."

Can we assume that you've been in touch with the person who broke Diamond Geezer's licence and told them about the problems they have caused?

Dave, That's exactly what I intend to do in future, and the answer to your last point is yes.

i'd rather have someone admit to mistakes so you get a brownie point for that.

If only we had the same law.

Unsworth, what is your basis in fact for saying that Unite is unelected? I assume you mean the Executive - all elected regularly by the membership?

Also I would remind you all that anyone can join a union and vote in it and take an active part - the fact that you choose not to is up to you, but don't then turn round and claim they are undemocratic.

I think Diamond Geezer, who writes one of the best blogs on the interwebnet, deserves better than being referred to "someone called Diamond Geezer". Surely you, as a "blogging guru", has heard of him??!

"How does that explain Chris Grayling being requested to produce his passport to Strathclyde Police at Glasgow Airport recently?"

Presumably their suspicions were aroused by someone in Scotland claiming to be a conservative politician.

I think you are talking about celebrated London blogger Diamond Geezer?

One was a picture of a dole queue. The other is of an airport queue.

This country's lack of a sense of proportion is depressing.

Good poster. Is that a BBC man in the queue?

The biggest problem this country faces is the off-balance sheet liabilities that this Government holds.

Once the scale of Public Private Partnerships and Civil Service Pension Shortfall becomes clear this country will suffer the mother of all Gilt crashes.

Gordon is happy to shift the focus off this.

So Whelan, working in Downing Street, is some sort of elected MP or an appointed civil servant? Or is he just another 'political advisor'? Who is paying him?

And you'd possibly recognise that a party within a party - Unite in other words - is entirely undemocratic. Even Kinnock managed to understand that. Care to explain the relationship between Unite and its sponsored MPs? Who calls the shots? Who determines the voting patterns? Yet these scum are supposed to be representing electorates, not unions. Do you believe that the voting public understand the relationship?

I've asked before - who in Unite voted on the massive transfer of moneys and payment of individuals who currently work full time for the Labour Party? Where and when was the membership consulted?

Naturally these smoky back-room deals are never revealed to the honest, upright (if deluded) subs payers.

Teamsters? No doubt they're even now taking lessons in chicanery from Unite. Anyone looking at the history and current situation of these allies of Unite will fully understand how disgusting these gangsters really are - but Unite seems very happy to get into bed with them. How long before the
Hoffa clan and Mafia mobsters take control of Unite?

Iain - to avoid things like this, use an image source search engine - like TinEye or something. Quite often it also provides incredible amusement as you can see just how many people have nicked the pic!