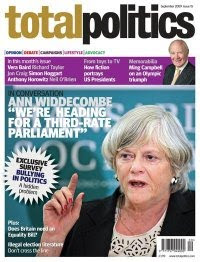 In the new issue of Total Politics, out today, I interview Ann Widdecombe. The interview has made a few waves in the papers this morning, with the Telegraph concentrating on her view on candidate selection and climate change and the Mail relishing the possibility of her appearing on Strictly Come Dancing. In the interview...

You can read the full interview HERE.
Posted by Iain Dale at 8:40 am

Totally agree with her about climate change. The hysteria whipped up by Nu Liebour and the BBC leaves no room for contrary arguement that climate change may be cyclic.
It may be difficult to argue that we are not helping but the arguement that we are the cause really does need closer scrutiny particularly when its used by a goverment to inpose yet more stealth taxes.

She comes across as extremely arogant. My successor? Isn't there an election. Also talks as if the conservative party have won the next election. As for offering herself as a part-time peer, thanks but no thanks.

So the Tory candidate for Maidstone was selected on merit - you heard it here first. In how many other constituencies will the Tories be palming us off with 2nd rate candidates Mr Cameron?

I am a member of the Maidstone Association.

I think you might be stirring it slightly over her successor. :-)

I get regular email bulletins from Helen Grant. She's already campaigning hard and I believe our Agent has had to tell her to calm down and save some energy for the campaign proper.

If you want to talk about merit: she grew up on a Council Estate to a single mother, but before the days of Labour's "equalities" agenda, got herself through University and now runs her own successful law firm.

Whilst there is certainly an advantage to the party having more female and/or black MPs, ultimately this lady won the Maidstone nomination because the members believe she'll make an excellent constituency MP.

As Ann Widdecombe says, she would have got this seat without the PC-based meddling of CCO. Be under no doubt about that.

None of the above said...

what do they know eh?

my mate down the pub says they're making it all up, in cahoots with the government and stuff, like.

This is a bit incestuous isn't it, Iain ? Or are you scraping the bottom of the barrel of desperation for people willing to 'volunteer' to be interviewed after the 'Curse of Dale' afflicted Hunky Dunky ??

I think this denialist who is plainly in the pay of big oil should be sent on a CP training weekend/re education camp to alter her denialist misconceptions fed to her by her big oil paymasters.

Isnt she aware that the thousands of foreign built windmills will produce millions of tonnes of pure clean energy without producing any of the dangerous and deadly toxin called CO2 with which big oil wishes to poison us with and millions of green jobs and we will all live happily ever after with a windmill in sight which BTW is completely harmless to human and animal health and anyone who denies this is obviously in the pay of big oil.
Did I mention big oil? they are very naughty people indeed, we dont need their stinking oil anyway, windmills will save us.

Unless of course Anne is already in the pay of big oil and is spreading their mis information via the interblog.

Ill get my coat!

"Theology of a medieval church" eh? Well, she should know as (like Blair) a late convent to the most medieval religion outside Islam !

Time to throw a little mud at this "icon" : as my MP, she was always spectacularly evasive about her position on the Iraq war (no doubt she now cleaves to the safe, post-event, Conservative party line).
Like George Galloway and Vince Cable, she is a popular figure, carefully building her image, and usually economical with the truth.

Oh gawd, can't stand the woman whenever she opens her mouth, her voice grates on me, which is a pity really as I try to listen to what everyone has to say, even though I don't agree with their politics.

Pure gold, Widders. Right on every count, such honesty and integrity lost to Parliament. Would have made a 1st class Speaker too, instead of that preening pip-squeak.

A voice coach for Ann would have made her more bearable to listen to.

She is quite right regarding her views on candidate selection. There have been many u-turns . The Tory executive at local level usually went for the same handsome military/public school type of candidate with a huge country estate, in order to hold fund raising functions when he got elected!

The trend now is for fresh faced sporty girls with clipped forties style voices to provide local colour by way of the Boden look, this type of 'gal' appeals to the country estate ex public school retired military types who will be giving up their parliamentary seats at the next election !

Can any of us remember what is meant by quality? Do we have to hark back forty years or so.

Perhaps a local treasurer of the WI or working mans club may suffice?

The claims that any Climate Change is not significantly a product of human actions are truly enhanced off course by s'tory liebels & abuses . . .

Ann Widdecome is a thoroughly decent, logical, plain-spaking, principled person and I shall mourn her going.

The Conservative Party in Parliament already has quite a large number of second class citizens. However, that does put it ahead of the Lib Dems, and way way out in front of Labour.

Ax a teenager I knew someone slightly who has now been a tory MP for some time. If you enter his name into WIKI you get the entry for "Vodyanoy" and stuff about an author soo . . .

He was single minded, and may have worked very hard.

He isn't remotely as suggested the old style MPs were.

Neither, really, was a predecessor at Spelthorne, Sir Beresfprd Craddock. He was pretty dour, must have served in WW2, and was worried about inflation in 1964.

You probably need to look back to 1945 to find a significant number of candidates, let alone MPs, who were all that dashing.

I do admire Anne Widdecombe, might not always agree with her but she speaks her mind in a straight and forthright way and beleives in what she says.....are you listening `Dave`????......She will be missed in parliament. Oh yes and her views on so called climate change are absolutely spot on....the oiks have been looking for a cause ever since the Berlin Wall came down......

She has been doing Ken Livingstone's slot on LBC all week. She has the perfect face for radio and the perfect voice for the printed word.

Btw might not the window "grills" you suggest your golfing prowess causes neighbouring householders to erect be "grilles" . . ?

Man with a thermometer said...

Climate change and global warming -it is the final refuge in the nit-wits' paradise that is the left.

Followed your link to the Total Politics interview. Couldn't find any reference to the climate change quote. Has it been removed.

Animal Magic, you clearly haven't been eating your carrots!

Half way down the second column, after the bit where I say GIVE ME AN EXAMPLE.

Quietzapple, can you not find it within yourself to celebrate and congratulate anybody to the right of your politics who does a good job?

If you can, can you point me to such an example of your scribblings?

Widdecombe: Those who asked questions are ‘deniers’.

None of the above: First page of his science blog talks of "The denialosphere".

Very stute and observant from Widdecombe.

As it happens I have found good things to say about Anne Widdecombe in the past, and may again.

I have also defended Eric Pickles, Nadine Dorries and others to the right of good sense on occasion.

As a councillor I got on pretty well with quite a few conservatives too.

But few posters declaiming their right wing credentials can hold either their water or maintain good digestion I have found.

I thoroughly enjoyed her interview with you. Thankyou.

I agree entirely with her comments on climate change.

Interesting lady and a loss to parliament as we are entering a new era.

If Anne Widdecombe could only manage to stop talking about herself for a few days, "man-made global warming" would reverse itself, spontaneously.

Quietapple - your first name isn't "Jonah" by any chance is it?

Why can we not have more politicians like Ann Widdecombe, people who speak their mind and won't be told what to say or think by anyone else?

Ann Widdecombe, among other things, supported the 42 days detention bill; Eric Pickles seemed to me justified in having a second home in Brentford while residing primarily in Brentwood in Essex where his constituency is; and Nadine Dorries' blog should not have been pulled by the tax exile billionaire Barclay bros Daily Telegraph in their full Dully Tele mode.

Yes, MPs [like Ms Widdecombe] who "speak their minds" have their place.