The Curse of Niall Paterson 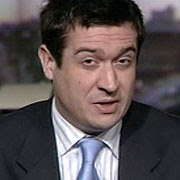 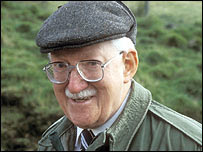 Be careful if Sky reporter Niall Paterson mentions you or stands near you. On Budget Day he was nearly decapitated by a falling piece of scaffolding from the Number 11 Downing Street roof. Today he wrote a piece on the Boulton & Co blog comparing John McCain and his two elderly senatorial colleagues who are accompanying him on his visit to London, to the three characters from Last of the Summer Wine. And what happened next? Twenty minutes after Niall posted the piece on the blog the Press Association announced the death of actor Brian Wilde who played Foggy in the long running BBC comedy. The curse of Niall strikes again.

For those who are unfamiliar with Niall Paterson, he's the one on the left... :)
Posted by Iain Dale at 10:17 pm

His Grace preferred to focus on the death of the magisterial Paul Scofield, though communicants have criticised him for ignoring the death of 'Foggy'.

I thought his comments showed, yet again, the left dominated Sky News reporting.

Why you grace them with your presence is beyond me. They belittle the Republicans and Conservatives and swoon over anything any Democrat
or Labour/Lib Dem may say.

They are as bad as the BBC.

Nice one, Iain! I was reading the Sky blog when the news of Brian Wilde's death was announced on the radio and thought it weird that Paterson had mentioned "Foggy". I'll read him more closely in future!

Brian Wilde was part of a Devil worship cult.

Well, actually he played a character who was. He was "Rand Hobart" a possessed lunatic who joins the coven of Niall (gedditt?) McGinnis as Julian Carswell (an Aleister Crowley type) in the totally and utterly brilliant "Night of the Demon", a 1957 horror b movie, starring Dana Andrews.

Sadly, he never again reached the heights of such wonderful ham acting, even in the land of Hovis, the New World Symphony and smelly old men.

You are so wise. We await further examples of such erudition with anticipation.