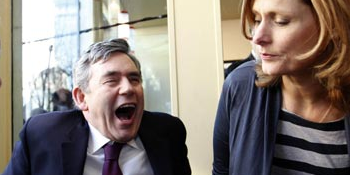 Can we not get ones with velcrow rather than safety pins!

"Yes Gordon, we are having jelly fo afters"

Is that from the new series of V?

Darling still thinks he’ll be Chancellor if we win, ha!!

"Sarah tried to stifle a smile as Gordon discovered the safety pin that she had glued to the chair..."

"Gordon, shut the f*ck up. It wasn't even funny the first time."

care in the community worker loses control of patient........

Gordon explains that the next mailing will be to the recently bereaved, informing them of Tory plans to sell corpses to big business.

Ruprecht can go to the toilet

Yes Gordon, the Tories are still wheeling out Osborne despite knowing he's a vote loser.

No you heard me right Gordon, Tony has got lost in the Serengeti

Sarah, as one retard to another, why do we procreate? Surely, the socialist dogma of eugenics says we should never have children.

Come on gordon time for your pills

"The Nokia bounced off the wall but then where did it go?"

D'you know, Gordie, I think we might just hold on in Gillingham

"Gordon it's true, I have been having affair with Nick Clegg I am one of the thirty".

Sarah, Sarah, I've just shot myself in the foot!

You are all missing it. Mr Dale really is rather naughty!

Ruprecht. Calm down, do you want me to get the genital cuff again.

"Ok Sarah, just let go and I'll do what you want"

Every day in every way, I'm getting better and better

She thinks the tories are a party she can afford...

"Sarah, Sarah....Ed just pwomised that we're gonna win with a majority of squillions'

Gordon. how many times have I told you not to let the rubber pants get in a twist

Gordon, John Prescott's just called, He wants to know if there's any chance you could get him a peerage.

Maybe he saw her feet? They're minging.

The new gibbon at Monkeyworld has given birth, scientists report.