A Promotion for TV's Shane Greer 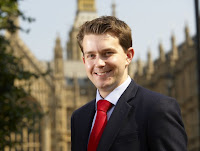 I'm delighted to announce today that Shane Greer will be replacing me from 1 May as Managing Director of Biteback Media, the company which owns Total Politics Magazine.

Shane has been instrumental in the success of the company in its first two years, and having established it, it's time for me to hand over the reins to someone I have complete confidence in to take the magazine into a new era after the election. Those who have worked with Shane, in any capacity, will be familiar with his unrelenting drive, his uncompromising pursuit of excellence, his tremendous ability to bring out the best in those around him, and his complete and utter commitment to, for want of a better word, winning.

And it’s these characteristics, married to his proven track record, which make me confident that under Shane’s leadership, Biteback Media and Total Politics will exceed even the loftiest expectations.

I shall be concentrating on expanding Biteback Publishing and looking at acquisitions and new areas of development for the Biteback Group. I will, however, continue to do my monthly In Conversation interviews for the magazine and host the odd event (if I'm allowed), as well as continue to chair the company's board.

I told Shane I was going to announce his promotion today, and asked him to give me a quote about his new role. Here’s what he had to say:

"Biteback Media’s success over the last two years has been incredible, and that success has been a direct result of Iain’s leadership and the team he has built. It is my goal to build on that success, and build on it in a big way. It’s a big challenge, and one I’m delighted and honoured to take on. But with the energy, creativity and drive of the team at Biteback Media, I know we’ll be successful.”

No idea if this is an April Fools or not. Lots of things that I'm reading today are leaving me uncertain as to whether they are actually pranks - like Gordon Brown making speeches about immigration.

You really shouldn't be telling people they are going to be promoted on April Fools Day...!

Brilliant, congratulations! Well-deserved. What will be your new focus Iain?

Today is April 1 Iain, I think you are being very cruel to Shane...

I think perhaps you could appoint a Vice Chairman called Wayne and a Secretary called Jayne !!

All I remember is Greer mocking UKIP's chances at the Euro Election, saying in no uncertain terms that we were going to be decimated. It made your predictions of a UKIP wipe out seem optimistic!

Can't say I had too much time for him after that arrogant tirade...