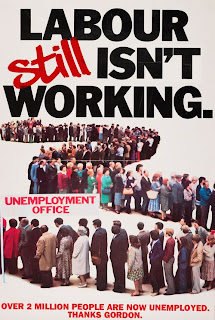 I guess it was only a matter of time before the Conservatives released this poster. Personally, I reckon it might have been wiser to put it out during the election campaign, but it is a powerful reminder of the parallels between the current crisis and Labour's economic woes in the late 1970s.

Fact of the Day: Did you know that every single Labour government in history has left office with unemployment higher than when it started. Looks like they're not going to buck the trend this time, doesn't it?
Posted by Iain Dale at 8:43 pm

CAN CAMERON RESUSCITATE THE NHS?

“it is a powerful reminder of the parallels between the current crisis and Labour's economic woes in the late 1970s.”

And remind me. Then what happened to unemployment?

Would be interested if anyone thinks it seems a tad gleeful, like they were waiting for the figure to go over 2 mill before releasing it? I think I agree Iain, it would have been better to go with this during the election, albeit that the figure will probably be 3 million by then

"Still isn't working" allows the deluded to hope that Labour will start to work if only sufficiently left wing policies are adopted.

I think it's not as effective to say 2 million unemployed because the tribalists will parrot the well used soundbite that unemployment was worse under the Tories with 3 million.

What they should be saying is, despite the smoke and mirrors (started by the Major government) but perfected by labour, the actual total of "economically inactive" is around 10 million.

...and what were the unemployment figures when the Tories were last in office? http://leatherhead.files.wordpress.com/2008/12/uk-unemployment-history1.png

Let's also not forget the fact that the Tories massaged the figures by putting people on IB when they were just unemployed.

It is amazing how the Tories always forget the unemployment woes or the economic woes when they were running the country. Let's face it, if Argentina hadn't invaded the Falklands Labour would have been back in in 1983 or 1984, Thatcher would have lasted only one term.

The figure at the bottom says 2 million.
No doubt by the end of the year (or election time) a new poster will be issued with a larger figure.
(The IMF say that the UK will see the economy shrink by 3.8 per cent in 2009, and a further 0.2 per cent in 2010—the only large economy predicted to still be in decline next year as well as this)

Brown was in favour of the ERM which caused the previous recession.

The fact is we are where we are and Labour are presiding over a massive increase in unemployment.

"But shush you nasty Opposition, don't tell anyone!"

The killer Tory poster will be the one with the baby.
"Mum's eyes, Dad's nose ... and Gordon's debt"

It's fun for sure, but I don't think this is the most productive line to go for when it comes to the country at large.

But Gordon's still got his job, so Labour will continue not to care.

And in two years time, Simon Gardner will still be trying to push the line that it's not Labour's fault that there are X million unemployed...

Just like so many lefties like to remind us, there were 3 million unemployed in 1982. No surprise that there were so many unemployed as Labour had left the country almost bankrupt, with a ridiculous and vindictive taxation structure, unions terrorising employers, a state sector that was fat and unproductive, and huge debts. (So not much change there then).

It took nearly 15 years to truly sort out the mess that Labour left last time, it will take longer this time.

They have run out of other peoples money to spend, just like last time. God help us if the people of this country are stupid enough to vote Labour in again.

@ Matt said...
"Let's also not forget the fact that the Tories massaged the figures by putting people on IB when they were just unemployed."

Which, if true, is trivial compared to ZaNuLab putting the unemployed into state non jobs at 10's of times the cost of keeping them on the dole and giving them index linked pensions as well. Adding the non jobs to the official unemployment figure gives us a true unemployed figure of about 10 million. Only a moron socialist like Gordon Brown could come up with such a scheme and call it economic progress.

Gosh and I only wrote about the old poster at 12:30 today!

Labour isn't worth it.

Presumably they're counting on the public to remember unemployment levels under Callaghan but to forget what happened to them one Attila the Hen got going. Interesting tactic. She managed to con the voters into thinking she was going to tackle unemployment, maybe Cameron can repeat the trick?

It must be said that Iain Dale correcting the grammar of one of his commenters - within 4 minutes - represents a new high of ridiculous knee jerkism.

Particularly unpleasant given that John Hirst aka Jailhouselawyer is known by most people - even Dale - as having some aspergery stuff going on.

Meaning that "wasn't there"/"weren't there" distinctions from Iain indicate only ... idiocy.

Do you still have any YCs to make a new poster?

I would have thought this poster may backfire and lose the Conservative Party support. It will tie the party to the memory of Margaret Thatcher who, for a very large number of people in this country, is still very much a hate figure.

One of the five pledges on the famous 1997 card that John Prescott still carries around was the promise to cut youth unemployment.

This has now been higher than it was in 1997 for about three years.

This is the devastating critique we should use. It is Labour's own failure and it is a direct breach of one of TB/GB's main pledges from 1997.

Perhaps the slogan should read "Labour has never worked"

I do not want another Thatcher in power. However, two things she did get right. 1) Dramatically cut down the power of the trade unions, which had got out of hand. 2) Brought home the idea, you can't have what you cannot afford.

That second point is the downfall of all Labour governments. McBust tried this by smoke and mirrors economics, in the end it gets found out that all you have is smoke and mirrors. The level of risk as epitomise by the RBS, shows the despiration that McBust is prepared to maintain power. I still believe that 'Fred the shreds' £13M ADDITION to his pension was to keep him quiet. McBust, RBS and Labour incompetance are closely linked.

Don't think much of it myself - it was a great message way back then, today it is only remembered by wonks like me et al.

Cameron would do better to be positive about what the Tories will do rather than knocking copy.

Gordon is doing a fine job without any help from the Opposition.

Batteredstrat said... “And in two years time, Simon Gardner will still be trying to push the line that it's not Labour's fault...”

And once AGAIN can I remind folks that I am not - nor have I ever been - a Labour supporter.

But I remember just fine Tory Governments and unemployment and it wasn’t pretty. Basically, they couldn’t give a **** as it rose to greater and greater heights under their watch and I doubt much has changed.

I seem to recall one Tory minister saying something along the lines of unemployment being a good and necessary thing. No doubt someone with a better memory will have the relevant quote.

Well I didn't know and I don't particularly care, either. That's not the point is it? Has Hirst asked for this to be taken into account? Was this part of his defence in court and is he now receiving some sort of treatment or medical supervision? Do you suggest that we should all make enquiries as to people's personal affairs prior to making comments?

So, what's your excuse for being a clown? Is it something genetic that we all need to 'understand'?

What was all that about kitchens and heat?

Iain: "the parallels between the current crisis and Labour's economic woes in the late 1970s".

And which were they? Or, did you mean in the singular?

Iain: "Did you know that every single Labour government in history has left office with unemployment higher than when it started".

Can't the same be said about the Tories? Or, sending them off to war instead reduced unemployment?

"Or, sending them off to war instead reduced unemployment?"

In the light of current circumstances is this Brown's Masterplan, then? When can we expect to see our troops invading North Korea?

I guess your position may be that Conservative governments always choose this method of reduction of dole queues. Care to comment on the other economic aspects of war? And if you do take this view can you point to any research which might support that stance?

"The first substantial rise in unemployment after the war happened under a Labour government – in 1967. Then in 1972 unemployment reached a million under the Tories.

Labour was furious. It patented a slogan: "Back to work with Labour." Under the Labour government which followed, unemployment soared to one and a half million.

The new Tory leader, Thatcher, became a champion of full employment. Then she got into office and we were back to four million unemployed.

Yes and my mother has lived through all of these Labour Governemnts. I can just manage 3, starting with Atlee.

Every Labour government has ended with economic incompetence.

What on earth does it say about the Tories that they're recycling election posters from THIRTY YEARS ago?!

Here's what we think:

"We could not use the real unemployed. They might have objected to appearing in Tory publicity. We wanted people who would not object".