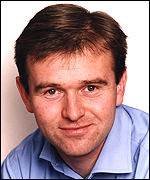 David Singleton reports in PR Week that former Cameron press chief George Eustice is leaving his job as External Relations Manager for the Conservative Party to join Portland PR, the outfit run by former Downing Street spin chief Tim Allan. It's another sign that PR and lobbying companies are desperately trying to beef up their Tory credentials. It's a great shame the Tories have lost George, as his role in building coalitions was an important one, and it is difficult to see who could replace him.

Someone said to me recently that if Danny Finkelstein, Tim Montgomerie and I set up a Tory oriented lobbying company we'd be very wealthy people within a very short time. Maybe. I doubt whether any of us could look ourselves in the mirror again, though. :)
Posted by Iain Dale at 3:30 pm

“I doubt whether any of us could look ourselves in the mirror again, though.”

Oh dear! Now you have got to expand on that.

If I were you I would start positioning myself for 'The Interview' - after the next election.

But just think what a lovely mirror it would be!

Mmmmmmmmm! That Simon Gardner, he seems like a nice boy.

Iain - were you not a lobbyist once upon a time?

So. Worse than being a banker, then.