Alastair Campbell is a Sweetheart 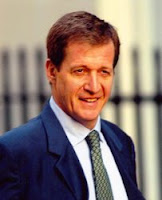 I was at the launch of the new Fabian Society book, the Change We Need the other night and thought you would be amused by an exchange between Alastair Campbell and TIME Magazine journalist Catherine Mayer, who I think is a friend of yours. She enraged an audience member when she talked about how the greatest amount of residual anger about the Iraq war being within Labour and the left and said that was because Labour had stifled debate. He proceeded to harrumph loudly and later went on the attack in his contribution from the floor. The first part of his contribution, not aimed at Mayer, was about his fears that the “Trots” would 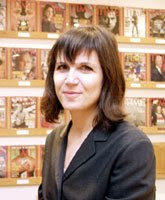 infiltrate Labour again. The man from the floor then turned to Mayer and said “sweetheart, if you think there wasn’t debate about Iraq you’re on another planet.” It was like being in an episode of Life on Mars. Sharp intake of breath from audience. When the chair, David Lammy, went back to Mayer for a wrap-up, she joked that she was still speechless at being called sweetheart. Alastair said “surely you’ve been called sweetheart before?” Mayer replied sweetly: “Yes, by you”. Game, set and match. Anyway, pretty funny to see sclerotic Old Labour so perfectly personified in one audience member.
Posted by Iain Dale at 9:53 pm

May I ask you peep over here?

I would not mind at all if he called *me* "sweetheart*.

He's not a sweetheart. There are plenty of other phrases that describe Campbell far better, usually combining terms for deceit with names for female private parts.


And Yvette Cooper must be watching out for her future image because the gratingly wining (you have to feel sorry for Maria Exall) Angela Eagle has been put up to talk down Mervyn King mon Newsnight.
Eagle will no doubt be keen to impress Ms Harperson.

The Eagle has crashed on Newsnight.

I really wish I was not an insomniac -

But the sight of this dumb assed (thick as two short planks) Baroness Angela Wotsername on SKY is bringing on a vomit attack.

The fat cow thinks its a good idea that children are taught Twitter !!! (where the govt can monitor you later)

Lest we forget what Campbell stands for in his attempt to integrate himself into ordinary civil society.

He was Blair-Browns frontman to destroy the Conservative Party and its leaders. Fair enough. Not really. His lies, bullying and generally corrupt behaviour undermined the body politic, allowed the Iraq war to proceed without due process and was the catalyst in motivating Dr Kelly to commit suicide.

Campbell is not cuddly. He is a ruthless politicial killing machine. A disgusting specimen.

Matthew Parris got his number long ago.

I didn't realise they were still letting Lammy out. Shows how p---poor the rest of them are.

Why does your friend impute that the "sweetheart" wielding audience member was "old Labour" etc. If your friend was there ... it was open door, no?

So you're accusing me of making the whole thing up. Dear oh dear.

His kids go to the school my brother teaches at they met once . I think of him as a child really , always striking martial poses in world of gestures he is apparently "Always on".Shudder....
Still I `d be more impressed with Mayer is instead of sulking about being called 'sweetheart' she said ,’ I `d tell you shut your toadying little gob if I was not concerned you might either burst into tears or get drunk or worse still write another shite book on the words dullest subject....

That’s what I `d say