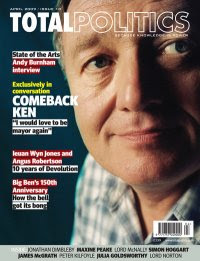 The new issue of Total Politics is out this week, with some fabulous features, interviews and reporting. Here are a few of them...

Iain Dale In Conversation with Ken Livingstone
Interview with Andy Burnham
Interview with Angus Robertson MP (SNP)
Interview with Ieuan Wyn Jones AM (Plaid)
Budget Q&A with John McFall, Jeff Randall, Greg Hands & Jeremy Browne
Donal Blaney on the perils of political libel
James McGrath on life after Boris
Robert Waller on East Anglian marginal seats
Debate: Do political academics live in the real world?
Is the Church of England still the Tory Party at prayer?
The 150th anniversary of Big Ben
If I Were PM: Maxine Peake from Shameless

You can buy a print version of the magazine at any branch of W H Smith, or selected branches of Waterstone's and Borders.
Posted by Iain Dale at 1:08 pm

What about 'Total Bollocks'?

In statements our Chancellor Mr Darling talks about £100 losses by Dunfermline Building Society. Indeed yesterday Yesterday he ruled out a baleout saying it would cost up to £100 million.

But in fact the taxpayer is taking on £1.6 billion of toxic assets.

What a shambles - where were the FSA? why has this only become news this last week?

I wonder whether I should buy a copy.
Can you tell me in your questioning of McFall - did you ask why he is such a miserable patsy for Gordon Brown??
if not I do not see the point.

Why are so many actors lefties? Must be a form of benefit reipient syndrome.

It’s always been that way.

The interviewees this month are all leftie hoons. Complete waste of trees.

For goodness sake get a grip on your organ.

Put some babes on the front cover. Every issue has an ugly mug on it.

So ok, the Wonder Woman issue wasn't bad, but Hatters is older than me!

A note on how to improve circulation - just have the word "boobs" in a prominent position or "Cherie Blair Nude" - having fairly innocently had these terms on my blog, I find I am getting a lot of hits from Westminster Internet addresses and comments from someone called Richard Timney, complaining about the lack of hard material.

The Livingstone interview is really great. Much as I don't agree with his politics, he's quite an insightful bugger.