My Book of the Year 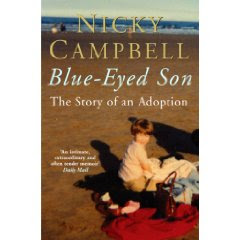 I feel a bit bereft. You know that feeling when you finish a book that you never wished would end? I've got that now. This instant. Four years ago I bought a book I probably thought I'd never end up reading. You know, one of those books which looks quite interesting, but there's always another book which seems to take precedence over it. BLUE EYED SON by Nicky Campbell was one of those books. Until last week.

For those who don't know him, Nicky Campbell presents Five Live Breakfast and Watchdog. He made his name as a DJ on Radio 1 and presenting a game show called WHEEL OF FORTUNE. I've been interviewed by him perhaps a dozen times, but never really spoken to him outside the confines of a live radio studio. He can be quite a sharp interviewer and is always ready with a witty one liner. He's one of Radio 5 Live's star presenters. Like most media people, he has his fans but he also has his detractors. But even his detractors could not fail to be moved by his wonderful book.

The book has a simple aim. To tell the story of Nicky Campbell's adoption and how he found his biological parents and wider family. I won't spoil the story here, but he tells it with such an emotional intensity that it is sometimes difficult for the reader to cope with more than a few pages at a time. The conflict between wanting to discover where he came from and not wishing to bring any pain to his family is starkly presented.

I can't remember reading a book which has had such an emotional effect on me. Barely a page would go by without my eyes moistening, or a tear running down my cheek. Maybe it's because Nicky and I are more or less the same age. Maybe it's because family clearly means as much to him as it does to me. Maybe it's the way he describes his hopes, fears and insecurities which brings on the waterworks. I don't know. All I know is that reading this book had exactly the same impact on me as watching BAND OF BROTHERS did when I watched it on DVD a few years ago. I was unable to watch more than one episode at a time. I know it sounds pathetic, but there will be enough of you who know what I mean to warrant writing it.

I am not adopted and I suppose no one who isn't can quite understand the inner tortures which Nicky Campbell clearly went through as he went on his journey. He needed to know where he came from, and the discoveries he made along the way were not always comfortable ones. But he is searingly honest about his own weaknesses, ego and selfishness. At times his wife probably felt she deserved a medal. "You do have a family. It's us," she blurted out once.

Yes, this book is primarily about Nicky Campbell. But it is so much more than that. It's a book about the power of family as the cornerstone of our society. It's a book which celebrates family history, warts and all. And it's a book which I am so glad that I ended up reading. I'm now going to give it to my Mum for Christmas. Because she is the only person I know who cries more easily than me!

Sounds like an Interesting Book Iain - Bit like my Blog - Once you start reading it you cannot stop!

To get over your withdrawal, you might try Robert Caro's Master of the Senate.
Probably the best political history ever written.

I will happily pass on anything to do with Nicky Campbell. The most revolting man on radio which is certainly saying something.

I resent you advertising for him. Almost as much as I resent Panorama doing a sucking up job on Peston tonight, and also a love in with Alistair Darling as well.

Still it revealed to me that Peston comes from a suitably lefty pro labour background. No wonder he gets all the tit-bits of leaks from the government. I note fopr the first time his dad is a labour peer.

So now it all falls in to place.

I share your regard for Band of Brothers, Iain - it's a brilliant piece of work and the outstanding television achievement of the last decade. It brings home powerfully not merely the scale of sacrifice made for succeeding generations, but the youth of most involved.

I have to agree with trevorsden. Campbell is an awful presenter. He continually butts in to give some silly unfunny one liner he's just made up (often repeating it several times if he's ignoredby the guest) and it takes away from the interview.

It's a book about the power of family as the cornerstone of our society.

Sounds like Labour will ban it soon then, definitely not the party line is it ?.

Nicky Campbell is a self obsessed, self regarding NuLab lickspittle.

There is nothing he could say, think or write that would interest me.

Read the first two books of the trilogy. as well. The Path to Power and Means to Ascent. The entire works about 2600 pages. Every one riveting.