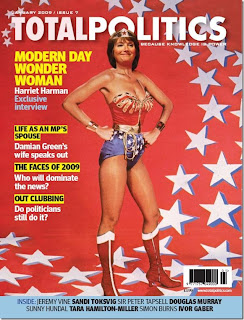 Cover feature interview with Harriet Harman
Predictions for 2009 & the faces of 2009
Sir Peter Tapsell on his 50 Years in the House of Commons
Damian Green's wife explains what it's like to be married to an MP
Interview with the Czech PM Mirek Topolanek
Poll: What do people think of Euro MPs?
Ideology in politics: Douglas Murray & Sunny Hundal debate whether it's a good thing
Tim Shipman argues that Obama won't bring as much change as people think
Shane Greer examines the role of political training in British politics
Robert Waller profiles the marginal seats in Wales
John Shosky on the seven best ways to start a speech
David Canzini explains how politicians can regain the trust of the voters
Tara Hamilton-Miller takes two MPs to clubland
Sandi Toksvig: If I were PM

You can buy a print version of the magazine at any branch of W H Smith, or selected branches of Waterstone's and Borders.
Posted by Iain Dale at 1:07 pm

Why have you super-imposed Harriet Harman's head on top of Alasdair Darling's body?


What won't happen next year? Oh, I don't know, but Nick Clegg will still find it diffi cult to find anyone to take him seriously.

Me vs Maradona vs Elvis said...

I think that image of Harriet Harman may be the most revolting thing I've seen for a while.

Makes you shudder, doesn't it?

Don't be overly surprised if this issue doesn't exactly fly off the shelves, Iain.

Worth buying just for the interview with Sir Peter - the first Conservative I ever campaigned for in East Lindsey in 1987.

Next Father of the House?

I can only repeat that I would never never never buy a magazine with that revolting picture on the cover.

I trust you have sacked the person responsible ... oh dear don't tell me it could not have been your idea could it?

In what sense exactly is Harriet Harman "Wonder Woman", other than in the sense of an excuse to publish a mocked-up puerile picture on the front cover?

What exactly is "Total Politics" supposed to be. Serious comment or fantasy time for sickos?