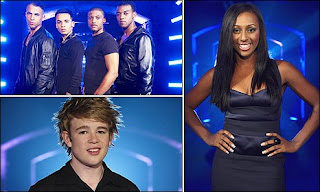 OK, so I admit it. I wasn't ill at all. I just wanted to get back to watch the X Factor Final. :). Well, if a Labour MP can spend the evening doing a live blog about it, it must have something going for it.

Hallelujah by Jeff Buckley is one of my all time favourite songs and I must admit that I wasn't looking forward to it being murdered. But Alexandra sang it brilliantly and fully deserved her win.

I have to say I don't think JLS were good enough to be in the final. Their lead singer has a voice which is more suited to Bros.

It's interesting that for the second time in three years a black artist has won the popular vote. And this year the final was contested between a black female singer and a black group. Perhaps those who wrote that it would be decades before Britain has a black Prime Minister should eat their words. If you've got talent, the colour of your skin doesn't matter. That's just as true in politics as in TV talent shows.
Posted by Iain Dale at 10:48 pm

"If you've got talent, the colour of your skin doesn't matter. That's just as true in politics as in TV talent shows."

Entertainment and sport have been virtually colour-blind for decades. Politics hasn't, and I would say that the States are a good way ahead of us here. If you think you can see a future black PM advancing through talent through the ranks of any British party, it would be nice to know who it is.

Not the racist country that the left make out we are after all then are we?

I disagree. I thought the singing of JLS in the final was beautiful--
a lovely interpretation while Alexandra SHOUTED!
On another point, a Scottish remedy for sore throats is to drink pineapple juice. It works!
Margaret

Iain, old son, the song was written by Leonard Cohen. It is not the best song for the man's voice but it is his. Buckley's version is magnificent - perhaps because of his vocal range and really just rather wonderful voice. (He murders the end of it btw.)

But it's a broken Hallelujah and so I prefer John Cale's. It's not as pretty to the ear but it is what the song is about.

I'm glad young Eoghin didn't win, he simply wasn't up to the mark, and I believe he only survived because people voted for their own region up until near the end. Alexandra was good, I knew all along she would win, and she won on merit. Great performer.

Ha! We had the same discussion in front of X-Factor. I said that if there was a black person who was inspirational he or she could become PM. It was pointed out to me that at the moment there are few inspirational politicians of any skin hue and that our hierarchical political system makes it difficult for fresh blood to enter the arena.

The conclusion being that the British electorate would have no problem electing a black PM, but that the political insidership would make it difficult for a black politician to reach the point of choice.

Its interesting that until you wrote that it hadn't crossed my mind at all. I saw them both as ,just, talented atists!

JLS should concentrte on the R n B stuff and they shouldn't go wrong.

I disagree Iain about JLS. I thought they were great. the one who should not have been there was Eggnogg, who defined thw word "average" in every way.

Yes , keen analysis Iain , it also shows we would elect a child if he had enough gel in his hair I suppose..... oh jesus maybe you have a point.

Using this type of pseudo logic... it could be argued that X Factor voters won't favour the Irish... or Welsh!

As far as England is concerned... it may be a while before it votes Scottish in a general election and I would definitely put a tenner on Robert Mugabe beating Cameron at the polls.

Personally... I couldn't give a damn what 'colour' a candidate is and I am certainly in no hurry to accommodate some PC agenda... my only stipulation is that any future PM should have an IQ higher than 40.

Menelaus: the motto for a Greek co-operative brothel, perhaps.

There seemed to be some people saying the same about Heather Small in Strictly Come Dancing which was ironic considering the winner last year.

I voted JLS but the public got it right - Alex deserved to win. And Heather Small couldn't dance.
Re politics - the 1st Black/Asian PM would be a Tory. They've given us the 1st Jewish and female PMs, so it logically follows ....

Another vote for remembering Leonard Cohen's authorship of the song. I prefer his, to be honest. People nowadays covering it seem always to completely gut the song of the intelligence of its lyrics in favour of stuffing it full of their own vocal showboating.

No,Iain you have got it wrong.It is simply to do with the demographics.X Factor has a young audience.Just look at Strictly...So yes indeed it is true we will have to wait!

Pretty impressive for a party which didn't have a black MP until three years ago.