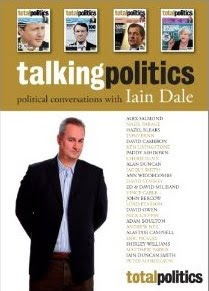 From the book blurb...

"Over the last two and a half years Iain Dale has interviewed more than 25 leading political figures for Total Politics magazine. Using the In conversation format, his unique interviewing style has lulled many a politician into a false sense of security and led them to reveal perhaps more than they intended. In these extended versions of the interviews with appeared in Total Politics, Iain Dale reveals new sides to the politicians we love and love to hate. Included in the book are interviews with...

Each interview has an introductory contextual paragraph and a mini biography.

The interviews are extended versions of the interviews published in Total Politics Magazine.
Posted by Iain Dale at 5:20 pm

Bit late for a stocking filler!

Come on Dioclese - its an advert.

I am looking forward to seeing what the new year website is going to be.

No Albanians or Koreans either blimey you're right - says it all.

You cant have a book with no Welsh people in it can you now, its not a book at all if the Welsh aren't in it any fule no that

It says that Wales does not provide any notable politicians?

Plaid Gwersyllt. Shocking isn't it? Insist that you are a separate nation and people start treating you as a bunch of foreigners and therefore mostly irrelevant. how could anyone possibly have predicted that?