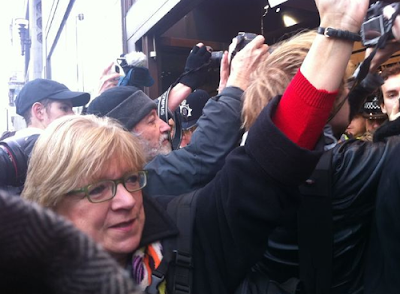 What about The Guardian Media Group avoiding tax? Polly anything to say about your employers?

I've sharpened my elbows for this sale...Get out of my way!

They don't do the Kate Moss line in my size, BOYCOTT!!

What?? Green is Jewish and pro Israel?? DOUBLE BOYCOTT COMRADES!!!

Where is Matthew Paris, I only ever appear on camera next to Matthew.

I didn't realise that view were all photography media students.

No, no, I'm supposed to be infront of those cameras.

I have come to pick up a few tips on tax avoidance from Sir Phil!

Is That a Alan Bennet look Alike?

She works for the Guardian Media Group which has avoided tax for years- as highlighted many times by Guido!

This woman needs being highlighted in all the press, television and radio news programmes.

Why not invite her unto your programme Iain, alongwith Richard Littlejohn, to discuss The Top Shop Demo and other tax avoiders.

I bet she will decline the invitation, which should not stop you exposing her false position.

What about the employees frightened by these rioters? Are the police going to take any action against Toynbee? or is she above the law.

A spell inside would give us all a rest from this stupid woman.

Is she making sure that they do not include Tuscan Villa's.

anything for a Tena lady

It's so cheap (and common)"

Phil Green is digging ever deeper in his search for low-cost Saturday girls.

The embodiment of hypocrisy.

Out of my way you plebs, I'm going to be late for my flight to Tuscany!

"Realising that Poly Toynbee advised both the SDP and New Labour, students ensured serial loser Ms Toynbee was kept well away from their protests"

A Tena lady, Anoneumouse? I wouldn't even pay a fiver!

Anyway, I can't think of a good caption at the moment: there are some good ones here already!

As billionaire Philip Green's wife comes under scrutiny for tax avoidance, women of all classes and ages gather to offer themselves as possible replacements.

Is Polly the one with thebeard?

Paul Staines (Guido Fawkes) protesting against tax "evasion" by GMG while avoiding tax by basing his assets in Nevis is hypocrisy.

Does nobody understand the basic principles of logic any more? Are we all gravitating to the "smear and innuendo" approach to political argument?

Strike me that An Annie really doesn't understand the concept of irony.

Guido's views on the GMG relate to their campaign against tax avoidance whilst practicing it themselves. He does not support one position whilst practicing a contrary one. He doesn't attack every tax avoider, only those who publicy profess to be against it.

Polly Toynbee pushes the AGW agenda while frequently jet setting between here and her luxury Villa in Tuscany.
She protests about Philip Green's tax avoidance while keeping schtum about her own employer's tax avoidance. If she feels so strongly about it then why not get get her own house in order before criticizing others.
Pot, Kettle, Black.

When you leave school and have to go out and scratch a living for yourself your views on taxation may change somewhat, that is unless you decide to join the wealth consuming public sector (or the parasitic BBC).

"Are we all gravitating to the "smear and innuendo" approach to political argument?"

That is exactly how it has been for thirteen years or so.

"It isn't easy being Green"

Some years ago the late Bernard Levin wrote an excellent article about tax avoidance. In essence he said that we should all pay our taxes, but anyone who paid more than they were legally required to was a damned fool.

If Philip Green can legally avoid paying tax then the problem is not Philip Green, it is the law.

Twig basically said it for me.

"Have you got any of those lovely pashminas left?"