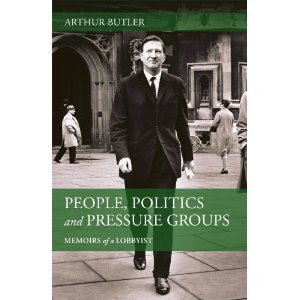 Almost exactly twenty years ago I started a new job working for Charles Barker, the big PR company. The public affairs division was called Charles Barker Watney & Powell. One of the mainstays of the company had been a man called Arthur Butler. He retired and was succeeded by Corinne de Souza. When Corinne left, they recruited me to replace her. I met Corinne seven years later when she became a customer of Politico's and she became a good friend. A few years ago Corinne started PicNic Publishing, which has recently published Arthur Butler's autobiography. With me so far?

Arthur Butler could seriously lay claim to being one of the first professional lobbyists in Britain and this is his story. He really is from the old school of public affairs consultancy. The book is littered with anecdotes of encounters with many of the famous political names of the 1970s and 80s. Butler started life as a journalist, but like many who came after him, he was persuaded the enter the 'dark side'. He joined a company called Partnerplan and proved highly successful in recruiting clients and persuading politicians to do what they wanted. He gives a fascinating insight into local government lobbying in the early 1970s and also the operation of All Party Groups. Indeed, the book is laced with anecdotes from various lobbying campaigns Butler has been involved with right up to the present day. In the mid 1970s Butler joined Charles Barker Watney & Powell and became joint Managing Director alongside the redoubtable Evie Soames, who was to recruit me to the company in late 1989. He stayed 15 years. I stayed three months. I hated it. I was bored out of my mind and hated the 'dating agency' side of the job. Vauxhall Motors were a client and I was deputed to arrange for them to meet Transport Secretary Cecil Parkinson. They were delighted to have their picture taken shaking his hand. The trouble was, they had absolutely nothing to say to him. I was used to running campaigns, not acting as a political pimp, so I quit. Clearly Arthur Butler found the whole political consultancy world rather more rewarding in terms of job satisfaction than I ever did.

This book really is a good read, if sometimes over detailed and somewhat lengthy. But it hasn't received the attention it undoubtedly deserves. If you're active in the world of political consultancy now, or have been over the last twenty years, it's a book you should definitely put on your Christmas wish list. I highly recommend it.

You seem to think being a paid lobbysit is admirable. T^here may be occasions when some of them lobby for something good but it must be obvious that their net efect is antithical to democracy, economically destructive & parasitical on the body politic.

Mind you the very worst such lobbying is when their funders are the very government departments they are lobbying, in the name of "the most vulnerable in society" for more fobvernment money for those departments. The entire "environmental" movement is funded fuinded by such government advertising & perhaps your man has not been involved in that.

Actually perhaps even worse are the Albanian drug lords who donated to the Democrats, & presumably all parties here, for their support of genocide, child sex slavery & organlegging in NATO occupied Kosovo.