The Antithesis of Customer Service 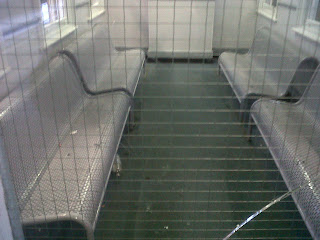 Last night I learned that South East Trains were informing their customers via their website that all train services were running normally. Except that they weren't, either from Victoria or Charing Cross. No trains were going out to Kent or Sussex. The Highways Agency wouldn't talk to the media about the state of the roads and where there were problems. Quite how transport companies and authorities think they can get away with this lamentable failure to communicate is anyone's guess.
And this morning, commuters wanting to seek refuge from the cold in the waiting room at Bromley Station were greeted with a locked door and this charming sight.
Posted by Iain Dale at 11:04 am

I think it's brilliant that so many mongs choose to live hours away from their places of work. It means that central London property is affordable for sensible people. If all the people who moan about their transport options did the obvious thing I would be priced out!

Checking out the SE Rail website was not just useless. By its failure to give up to date and reliable information it could actually have put some people in jeopardy. This is far from being the first time. In my experience more or less every time things get complicated or difficult their site might crash, or simply stop giving information or give information that is hopelessly wrong. What is clear is that nobody is keeping a running "log" and transmitting it. When I think that nigh on sixty years ago I could do this in a field Div HQ with only a typewriter and basic signals facilities it is baffling.

Yep, the train company serving North Kent yesterday was utterly, utterly shambolic - and the gross ineptitude continues today. Winter has caught them unawares - yet again. Yet the fare increases are phenomenal.

Some 'spokesman' on the local TV news last night stood explaining the effect of ice on the Conductor rail. Yes, and? What happens in Switzerland or Germany or, even, France? I don't need a lesson in basic physics, I just want you to sort the problem rather than describe it.

Not true. Last night while you were on air repeating this view SE Trains' website did indeed inform customers of adverse conditions and a revised timetable.

Unfortunately available only in pdf format bad news if accessing by mobile phone without pdf capability.

I guess that whilst the various companies are still reliant on taxpayers' money, then they will treat the customer with contempt. Just another "public" service. At least in the South East you have some functioning public transport from time. Here in rural Somerset, public transport is largely conceptual.

Yet again I had that smug expression on my mug.
Five years ago decided to quit driving around the country for a living.
Today, made the long commute from the bedroom all the way to the downstairs office.
Corridor was freezing, and there was a bit of a delay on the stairs as the kids were going to school and were hunting for gloves.
But still managed it in a near record time of 25 seconds.

This morning, Southeastern website said their contingency timetable of 2 trains an hour from Tunbridge Wells to London was in place. Having spent 45 minutes walking to the station, we were then informed that no trains were running. At all. Why could that information not be shared on their website?

And which genius agreed to run trains by way of a conductor rail that doesn't work in freezing temperatures?

"Quite how transport companies and authorities think they can get away with this lamentable failure to communicate is anyone's guess."

Because the train companies have a monopoly and the authorities are 'public services' and so - basically - unsackable, would be my guess.

Real and not perfect said...

About time the Government started fining these agencys and local councils for allowing the country to be bought to a halt.