When Town Twinning Falls Into Disrepute 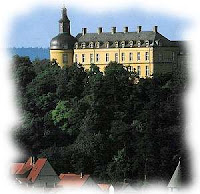 I see there are plans for Worcester to be twinned with Gaza City. The loony left really are back in vogue, aren't they? The councillor behind the move, though, is Labour councillor Alan Amos. I think it's the same Alan Amos that served as a Conservative MP from 1987 to 1992 before defecting to Labour after having to stand down from Parliament after a personal scandal. It certainly looks like him.

Town twinnings are fantastic arrangements and can have long lasting effects on people's lives. But I really hate it when politics intervene in the arrangements. There are many ways to make political points, but grandstanding like Amos is doing does no good at all.

My home town of Saffron Walden is twinned with the German spa town of Bad Wildungen (see pic). They are similar size towns, with similar facilities and a similar social make-up. I went on two school exchanges and made life long friendships as a result. I worked there in my gap year. I wonder if I would have had such an enriching experience if Saffron Walden had been twinned with Beirut. I suspect not. Mainly because I would not have been able to go there. But no doubt Labour councillors in Saffron Walden (not that there were very many!) would have felt they had made a point. Just as they did when they tried to make the town a nuclear free zone. The fact that it already was a nuclear free zone seemed to have passed them by...
Posted by Iain Dale at 6:18 pm

It's a Tory council!

You are absolutely, 100% correct Iain.

The last thing we want is upstanding, middle-class British towns being twinned with towns in developing countries. We don't need any more poor, non-white, non-Christian people coming to this country to leech off the great British taxpayer!

Paul, Er, I made clear it was a Labour council behind it.

I am considerably unhappy with Israel over the Gaza war. I mean seriously unhappy after 30 years of keen pro-Israel feeling.But twinning with HAMAS is a different matter.

Until Labour were kicked out of Birmingham in 2004, Ramallah was on the cards. The campaign continues.

If you go to the Labour MP for Birmingham Northfield's website you might get the impression he was elected to represent Gaza. Is it any wonder that every councillor on his patch is Tory?

The nuclear-free bit is a good one isn't it? Manchester used to 'boast' that they were a 'nuclear-free city', in case we thought they were Sellafield or Faslane. Maybe they still do. You know, they had special council voltage-wardens manning all the elecricity sub-stations to make sure that no electrons got through that had been sent from Hartlepool, Sizewell B, etc.

Coventry just celebrated its 50th anniversary of being twinned with Dresden (both being bombed out in WWII). We're also twinned with Volgograd. For us at least (our local theatre is named the Belgrade, after wood from Yugoslavia), it was a good way of building ties across the "Iron Curtain" during the Cold War, and helping to rebuild the main church in Dresden after the fall of the Wall.

Nuclear free zones always made me laugh. Presumably all the light from the Sun was reflected away and hospitals didn't use theraputic isotopes? Did it stop mysterious freight trains, carrying large stainless steel vessels, passing through at night?

On reflection the mindset of people who put such signs up makes me want to cry.

If Israel went ahead and bombed Worcester by mistake, can anyone say they'd notice any difference?

Hey, Worcester Cathedral contains one of the highlights of late medieval art - the tomb of Edward II. Yep, that's right, the one who supposedly died with a red hot poker up his arse.

What is not widely understood is that for around 200 years his tomb was the centre of a healing shrine, and he was promoted as a saint (esp by Richard III) in Rome. Of course there was a prejudice against canonizing Englishmen in the late middle ages (only two made it), so Edward was never actually canonised. But by all the usual rules he was a celebrated saint - certainly more than Julian of Norwich, for example.

Yep, it is the same Alan Amos.
He was Labour CLP Treasurer in Poplar & Canning Town when I was CLP Secretary.

I thought he was still living on the Isle of Dogs!

I'm more than a bit taken aback, as it doesn't fit with the Alan I knew and I got on fairly well with him.

I agree. The supreme joke in Manchester's case is that Rutherford began his work on splitting the atom at their cuffing university! I bet the morons who put the signs up don't even know that.

Isn't the whole point that you AVOId politics by at least acknowledging that Gaza city exists?

Or do you think now that Gaza city should be ignored simply because Israel bombed it?

You're the one bringing politics into this Iain, not them.

Sunny, eh? Of course Gaza City exists. Not sure what your point is here.

Firstly Paul - Its not King Edward II, its King John (he died in Newark and buried here) but a few clarificatons are in order. The council don't have the power to set up any twinning - they will "invite" the Twinning Committee to consider it... at which point that said commitee will, with luck, kick this ludricrous idea into the long grass without further ado.

What pleased me was that it was Councillor/Dr David Tibbutt (who I know) who tabled the amendment that what passed! It was very cleverly worded!

I’m Worcestershire born and bred. Worcester used to be a nice, slightly shabby down-at-heel backwater, smelling of horse muck and hops, and when I lived briefly down south in the 1970’s no-one could point to my home county on a map. Londoners discovered it existed In the 80’s, and as cities become increasingly third-world, they have been exiting in droves to places like Worcester, and destroying the character thereby. There is an entire new suburb called St Peters dedicated to housing the London diaspora, and Warndon Villages is a maze of Barrats houses which were green fields 20 years ago.
This bloke Amos is nothing to do with Worcester. Down tar us with the same brush.
Paul Halsall: you’re not one of them London types are you? Worcester and Gloucester are different cities.

Does this mean that we residents of Worcester can fire rockets at the rich people in Malvern?

This story has just been picked up on the local news. To clarify: apparently there are "practical difficulties", and Amos doesn't think that the City of Worcester should be welcoming a Hamas delegation. Right...

Iain, unlike you, I grew up in Beirut, as opposed to making a flying visit, and for much of the time in your youth you could not only have visted there but had a good time. In my youth there was a war, and it has to be said it was less pleasant than it used to be. Nonetheless, I would not change that experiance for anything in the world.

The loony left council that has agreed without a vote against, to the twining, is the Conservative controlled council of Worcester.

There is nothing wrong with that. In fact it is a fantastic idea. Sharing experiance is great.

All that said, the one thing that anyone can do for the Palestinians in either Gaza or the West Bank, is get their produce to market, because the Israeli government has for a very long time made it as hard as possible.

Iain, "Paul, Er, I made clear it was a Labour council behind it."

It was a Labour councillor in a Conservative council, no votes against.

This is hardly particularly conclusive. And BTW the Worcester News editor when interviewed was hardly enthusiastic.

ConservativeHome reports that in fact Conservatives do not support the twinning, which makes the BBC report even more duplicitous lazy and ignorant.
http://conservativehome.blogs.com/localgovernment/2009/02/worcester-torie.html
"Conservatives amended the motion to refer the debate to the Twinning Association - the correct body to consider such matters.

The Conservative Group will vote against any proposals from the Twinning Association to twin with Gaza City should such a plan be put forward by them.

So this is NOT a Conservative Council trying to twin with 'Hamas'.

My point is, what exactly do you have against this move? What is the problem with Gaza city as such? It's not an endorsement of Hamas, is it?

Would not want to live in Worcester

The whole thing brings twinning in to disrepute. It is supposed to be a cultureral thing not a political one that this is . Shame on them.

Practical difficulties ... not half! Unless the council is going to seriously fund the initiative, it is a non runner.

I am a Councillor Representative on our Town Twinning Committee. Our borough is twinned with a little town in Germany.

Other than a reception given by the respective Mayors for visiting friends all the money to fund the scheme is raised by the committee and members. They also fund their own travel and host families for free.

I can't see a lot of people in Worcester and Gaza organising quiz nights etc to fund mutual exchanges, or coming forward to offer free accommodation.

Just to clarify all this: Alan Amos (Yes, the former Conservative MP for Hexham found in a highly compromising position on Hampstead heath) proposed this gimmicky piece of grandstanding. However in the Conservative led council, there were only six votes against the proposal. the town twinning commitee may choose to accept or reject the proposal, but the Council en bloc did approve the proposal to refer.

I am not sure what practical benefit the City of Worcester gets, and have some sympathy with Iain's more practical view of town twinning, but there is no doubt that Conservatives supported the measure...

Royston, definitive Chav Town in Hertfordshire, is twinned with Grossalmerde De La Loupe. I am certain there must be a European language in which that translates as 'enormous turd of the wolf.'

Sunny, well it kind of does endorse Hamas because in town twinning there are normally trips by the city's political leaders to the other city. The thought of the leader of Worcester City Council welcoming the Hamas mayor of Gaza turns my stomach to be honest.

Why so coy? A personal scandal was:

"... cautioned by Police after an alleged indecency incident on Hampstead Heath ...".

So he's still playing silly buggers, then, but this time with an entire council.